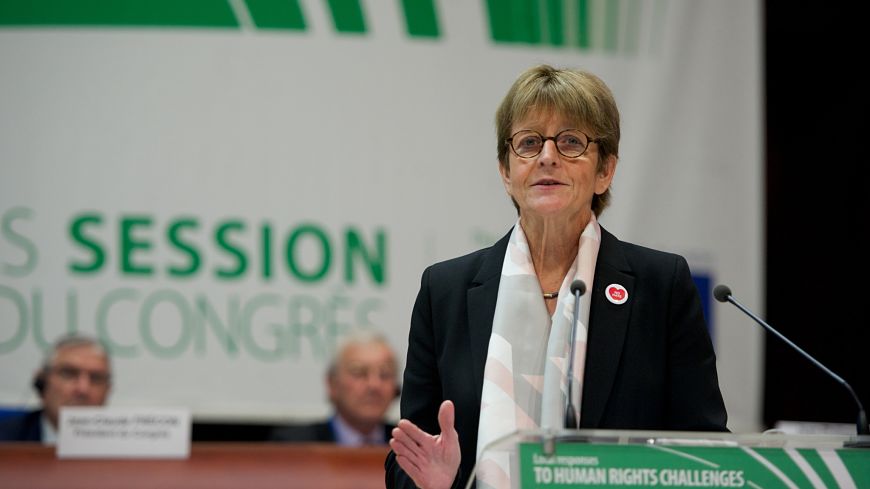 Addressing the Congress Members at the 29th Session, Anne Brasseur, President of the Parliamentary Assembly of the Council of Europe, highlighted the utmost importance of the Congress work in the refugee and migratory crisis. She recalled the Member states their responsibility in integrating the refugees by helping them to understand their rights and responsibilities notably through education. “A prerequisite is unquestionably a fair distribution of refugees amongst and within Member states. Regions and municipalities should be ready to take their share in helping to respond to this extraordinary situation”, stated Mrs Brasseur. She stressed also the importance of policies which say “no” to hatred, intolerance and extremism which, according to her, represent one of the gravest dangers for democratic institutions and living-together. She called on local and regional elected representatives to join the “No Hate Parliamentary Alliance” campaign in order to relay the message at the grass roots level. Among the other on-going crises that still need to be tackled, Mrs Brasseur mentioned the extraordinary challenges of terrorism, the situation in Ukraine with its territorial integrity and its internal reform, the worrying trends in Azerbaijan of restriction of media freedom, independence of justice, liberty of the person. Finally Mrs Brasseur thanked the Congress for inviting the Assembly to join its observation mission of the local elections held inin Ukraine on 25 October.