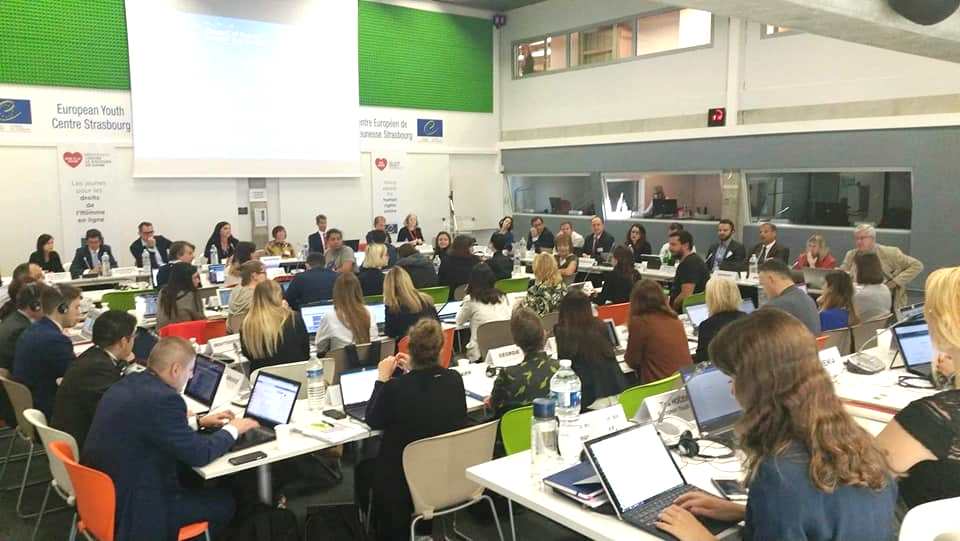 The Joint Council on Youth (CMJ) met for the first time in the new four-year programming period on 22 and 23 March 2022. Meeting in hybrid format, this was the first time the members had been able to meet in person since October 2019.

The statutory meetings were held at a sombre time, under the shadow of the Russian Federation’s aggression against Ukraine, which influenced both the discussions and the decisions. The CMJ adopted a non-exhaustive list of measures and activities to be implemented in the Youth for Democracy programme, as well a statement condemning the aggression and expressing its unwavering support to Ukraine and its young people, citizens, residents and undocumented people.  The CDEJ member for Ukraine, participating online, issued a plea to redirect resources, from the youth sector’s framework co-operation programme with Ukraine, to support youth work in the reality of war, support that is greatly needed.

In view of the increased relevance of the CM recommendation on supporting young refugees in transition to adulthood, the CMJ welcomed the updated roadmap. Further translations are to be made, especially into the languages of countries neighbouring Ukraine.

The news that the Committee of Ministers had adopted its recommendation CM/Rec(2022)6 to member States on protecting youth civil society and young people, and supporting their participation in democratic processes was welcomed with much applause.

Those Joint Council members participating in person in Strasbourg took time out of their busy meeting to attend the launch of the new youth campaign Democracy Here | Democracy Now.

The meetings closed with the expression of three hopes: for an end to the aggression against Ukraine, for the final designation of the 2022-23 Advisory Council on Youth (CCJ) and for a return to full in-person participation in the statutory meetings in October 2022 in Budapest.

For more information on how to join this campaign: Democracy Here | Democracy Now