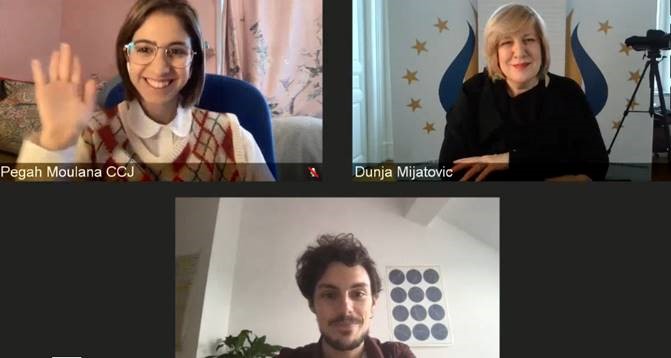 Contributing to the World Forum for Democracy’s theme for May of Defending the defenders, the Advisory Council on Youth’s (CCJ) Pegah Moulana and Jorge Aguado interviewed Council of Europe Commissioner for Human Rights, Dunja Mijatović.

Opening the interview with the disquieting statement “climate waits for no one”, Jorge and Pegah discussed with the Commissioner the situation of young people who have been the most vocal pioneers in the defence of our climate, calling on global leaders and governments to take effective action to preserve our environment.

Dunja Mijatović confirmed the important role of young environmental defenders and expressed her own commitment to speaking out for those who are dedicated to standing up for citizens’ right to a healthy environment.

Watch the video to find out more about the Commissioner’s views on defending the young people speaking out for the sake of our climate.

The Advisory Council on Youth has raised the growing concerns of young people faced with the impact of the climate crisis on them and future generations in the Joint Council on Youth (CMJ), the co-managed decision-making body of the Council of Europe youth sector. As a result, a CMJ task force on greening the youth sector was set up to address this issue.

The youth sector is also exploring the relationship between the climate crisis, young people and democracy and will link up to the work of the task force.