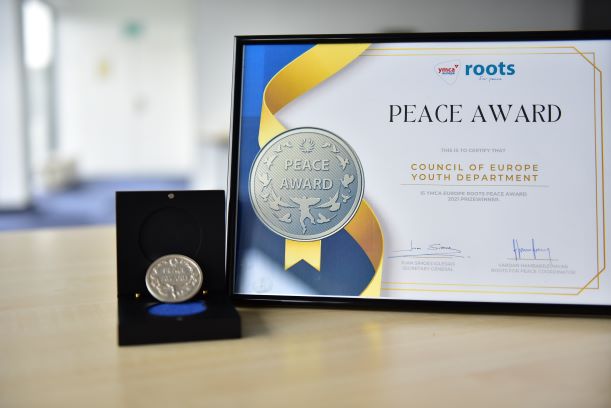 On 15 September the Council of Europe Youth Department was presented with the 2021 Roots of Peace Award, given out annually by YMCA Europe.

The award was given by the Executive Committee of YMCA Europe to express appreciation for the outstanding contribution of the Council of Europe and its Youth Department to the promotion of peace and justice in the continent. It was accepted by Antje Rothemund, head of the CoE Youth Department.

In her acceptance speech, she emphasised that the Council of Europe’s founding in 1949 was a response to the devastation of World War II. and that the organisation’s work over the subsequent seven decades focused on strengthening the fundamental values of democracy, human rights and the rule of law as the building blocks for lasting peace on the continent. She also highlighted the work of the CoE youth sector and its partners, among them the YMCA, to ensure that future generations of Europeans are instilled with these values and are equipped with the skills and provided with the tools and support to become active citizens.

The Roots Peace Award is a YMCA Europe initiative to celebrate good will and to empower young people and youth workers to be pragmatic actors of peace. It has two annual nominations. The monetary prize is to go to organisations applying through a competitive process, with decision subject to YMCA Europe Roots Peace Work Institute Alumni voting. The non-monetary prize is set to go to international institutions or organisations for their outstanding contribution to peace, reconciliation and well-being across the continent.