Green light for the 2020-21 priorities and mainstreaming disability issues 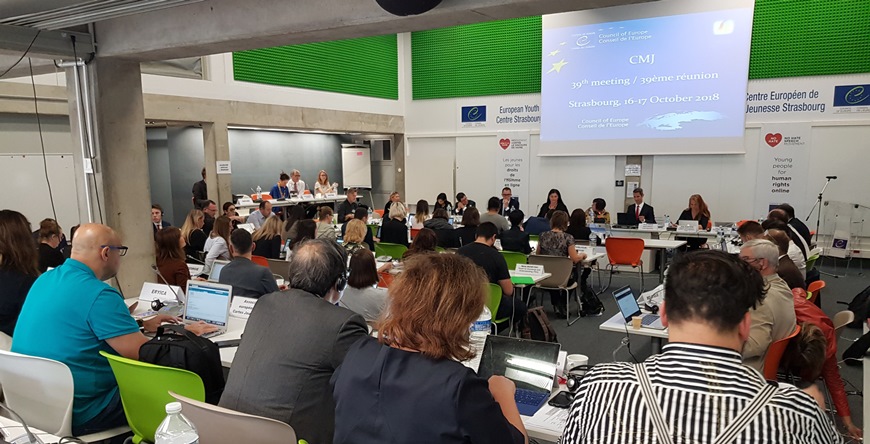 At a particularly well-attended Joint Council on Youth (CMJ) meeting, the governmental and non-governmental representatives in the youth sector’s co-managed decision-making committee made a number of landmark decisions and proved again the value of this co-operation.

The CMJ adopted the draft priorities for the Youth for Democracy Programme 2020-21 which were drawn up following the Advisory Council on Youth’s consultation of youth organisations and networks on young people’s needs. These proposed priorities will be integrated in due course into the Council of Europe’s draft Programme and Budget for the next biennium for examination by the Committee of Ministers in 2019.

The governmental representatives applauded and readily accepted the Advisory Council on Youth’s proposal to appoint a Rapporteur on Mainstreaming Disability Issues in order to monitor and promote disability issues in the Council of Europe Youth Department. This Rapporteur will work closely with the Rapporteurs on Roma[1] Issues and Gender Equality on considerations of intersectionality, focusing on protecting these young people from abuse.

Taking stock of the successful implementation of the 2018-19 programme thus far, the CMJ in particular paid tribute to the achievements of the No Hate Speech Movement Campaign and adopted a draft CM Declaration on its legacy, as well as guidelines on how to implement the Recommendation on young people’s access to rights. It also welcomed its approval of a draft CM recommendation on supporting young refugees in transition to adulthood. This draft text is part of the Council of Europe Action Plan on Protecting Refugee and Migrant Children in Europe and will now be forwarded to the Committee of Ministers for final adoption.

With a view to shaping the youth sector’s future programmes, the Joint Council on Youth approved the next steps in the development of a strategy for the period 2020-30. A drafting group has been set up to provide policy guidance and draw up a broad political roadmap, or mission statement, for the future.

More than 110 governmental and non-governmental representatives took part in the statutory meetings this week thus proving the commitment to and importance of the Council of Europe youth sector and its Youth for Democracy Programme.

For more information, including on the outcomes of the European Steering Committee for Youth’s and the Advisory Council on Youth’s meetings, please visit our “latest decisions” page.

[1] The term “Roma and Travellers” is used at the Council of Europe to encompass the wide diversity of the groups covered by the work of the Council of Europe in this field: on the one hand a) Roma, Sinti/Manush, Calé, Kaale, Romanichals, Boyash/Rudari; b) Balkan Egyptians (Egyptians and Ashkali); c) Eastern groups (Dom, Lom and Abdal); and, on the other, groups such as Travellers, Yenish, and the populations designated under the administrative term “Gens du voyage”, as well as persons who identify themselves as Gypsies.