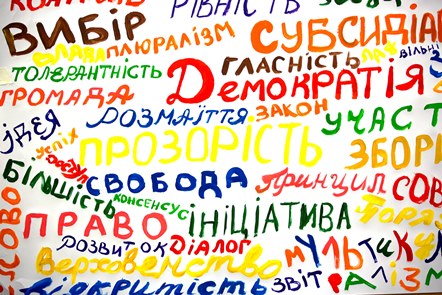 The Congress has developed a set of activities on the ground in Ukraine, to follow up on the Recommendation 348(2013) on local and regional democracy in Ukraine and the signature with national authorities in May 2015 of a roadmap setting out a timeline for the implementation of reforms.

Promoting the principles of the European Charter of local self-government as well as good governance, the  Congress activities support mayors and councillors in adopting innovative and participatory approaches, in response to citizens’ needs and expectations.

The activities implemented are diverse and adapted to the needs of the beneficiaries: workshops, regional seminars, platforms for exchanges and networking, direct support, political mediation, and legal advice.

Activities focus on themes such as the role and responsibilities of elected officials, communication with citizens, promoting values of local democracy, and effective and ethical strategic decision-making. They provide participants with an opportunity to identify ways of putting these principles into practice and changing how local affairs are managed, through an approach based on peerb exchanges.

Since 2014, over 150 mayors, 220 local councillors and 250 young local leaders representing all regions of Ukraine have benefitted from those activities. Partnerships with national associations of local and regional authorities have also been reinforced, so as to accompany the change and to scale up the results achieved within the Congress projects.

The project “Promoting local democracy in Ukraine”, carried out by the Congress of Local and Regional authorities, is part of the Council of Europe Action Plan for Ukraine 2015-2017.

It aims to improve the implementation of democratic principles in Ukraine, by enhancing the institutional and leadership capacities of local elected authorities and disseminating best practices in local democracy nation-wide. 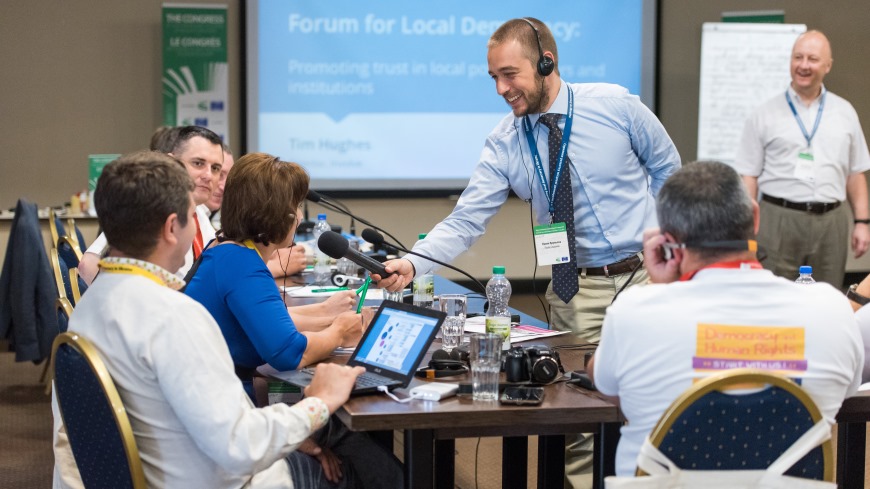 The capacity-building programme designed by the Congress enables peer exchanges and covers a wide range of topics linked to local democracy, in particular transparency and citizen participation in local decision-making processes, with in addition for local councillors and young local leaders a session focusing on getting engaged in local elections, whether as a candidate or as an activist.

Activities designed for mayors focused on leadership and institutional skills, and were the occasion to debate on the need and ways to infuse further transparency, accountability and citizen participation in their decision-making processes. As a result, mayors were enabled to translate the legislative changes adopted by the central government into their daily realities.

Following their participation in a “Mayors leaders for change workshop”, the participants were invited to apply to call for local initiatives on transparency and citizen participation. Five municipalities were selected to benefit from coaching, peer reviews and funding. Further information is provided under the section “Local initiatives”.

Through peer exchanges and a comprehensive and tailor-made support, councillors increased their knowledge on the European principles of local governance. More specifically, they debated and shared experiences on tackling corruption and increasing transparency and accountability in local governance and decision-making, and on developing democratic tools to further engage citizens into local affairs.

The impact of the Congress activities is evaluated positively by 48% of the respondents of a survey conducted in 2017 and rather positively by 27% of them. The changes introduced relate to an increased involvement of citizens by the local council to solve issues, the emergence of new measures and structures that improve the work of the local council, an increased openness and transparency of the council, and a change of councillors' attitude toward their work.

Young local leaders are local elected representatives (mayors and local councillors), representatives of civil society organisations and of media who are aged between 18 and 35. Seven seminars were organised within the project and gathered participants representing all regions of Ukraine.

Among the respondents of a survey conducted in 2016 to evaluate the seminars, 95% noted that their participation in project activities positively influenced their ability to implement initiatives. In particular, following their participation in seminars, they were able to solve concrete pressing issues faced by their community, to set up some cross-sectorial partnerships, to elaborate through participatory processes new strategies for local development, and to introduce new tools to monitor the work of local authorities in their community. 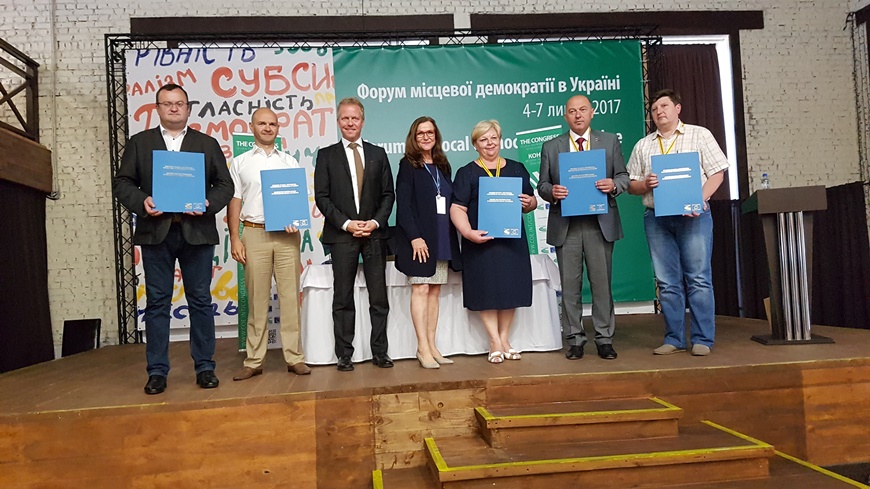 This support scheme is a follow-up to a series of national workshops organised between 2015 and 2017. Following a call for proposals, five local authorities from Ukraine were selected: Baranivka, Zytomir Region, Chernivtsi Region, Kreminna, Luhansk Region, Pervomaysk, Mykolaiv Region and Fastiv, Kyiv Region.

Tailored to the specific objectives of each local initiative, expert guidance, along with financial support, was provided to each municipality to plan, design and implement sustainable and replicable citizen participation actions. The aim was to encourage local authorities to become more inclusive, responsive, transparent and accountable to citizens, whilst ensuring that gender perspective is taken into account.

A number of local policies and mechanisms were introduced in the five municipalities, improving the dialogue and strengthening the co-operation between local authority and citizens. Such actions enable to bridge trust between the local government and its constituencies, enhancing both the quantity and quality of citizen involvement in local decision-making.

Consultative councils, forums and mechanism for opinion polling are just few of the examples of good practice that have resulted from local initiatives. 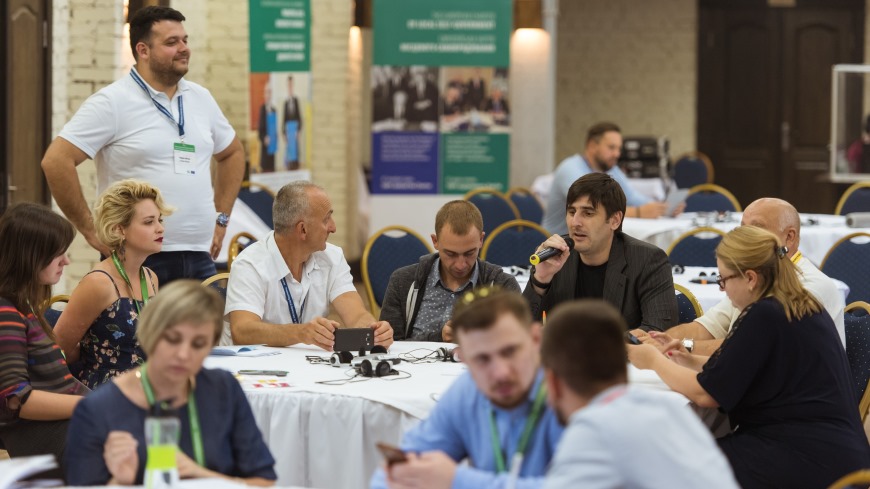 One of the main successes of the project “Promoting local democracy in Ukraine” is the creation of an informal yet strong network of like-minded local stakeholders who are committed to change and to enhance the quality of local democracy. Networking events were organised to disseminate and scale-up the results achieved by the project.

Forum for local democracy in Ukraine

The Forum for Local Democracy in Ukraine gathered some hundred participants – Ukrainian mayors, councillors and young local leaders, as well as Congress members and experts – from 4 to 7 July 2017 in Snovjanka, Chernihiv region, Ukraine.

The Forum was a unique platform for peer-to-peer exchange and networking between local elected representatives, civil society and experts from Ukraine and from a number of other European countries. The participants discussed topical issues related to local self-government, such as representative and participatory democracy, the representation of women in politics, youth engagement, and tools for increased citizen participation.

In their final declaration, the participants committed themselves to increase the quality of representative democracy and to develop participatory strategies to engage citizens in the decision-making processes at the local and regional levels, thereby contributing to the local self-government reform in Ukraine.

Mayors, local councillors, young local leaders and representatives of national associations of local authorities had the opportunity to exchange experiences and discuss the good practices resulting from local initiatives on transparency and citizen participation implemented in the municipalities of Baranivka, Chernivtsi, Fastiv, Netechytsi, Nemishaeve, Kremina, Pervomaysk and Slavutych.

Through peer exchanges, the participants focus on the issues of gender equality, preventing corruption and promoting ethical, transparent and inclusive policies as a mean to consolidate the quality of local democracy, in the framework of local self-government reform.

Every year, a group of 20 participants is selected among the project’ young local leaders to take part in a study visit to Strasbourg. Organised in parallel of the World Forum for Democracy, it is also the opportunity to meet with representatives of the Council of Europe and local authorities from France or Germany. These study visits enable the participants to:

2017 World forum for Democracy : "Is populism a problem?"

Co-operation, consultation and financial autonomy – three conditions for the proper development of local and regional democracy in Ukraine

For the Congress it is crucial that the associations of local and regional authorities and their national government work in synergy in order to broaden and enhance the application of the European Charter of Local Self-Government, boost citizen participation and foster multi-level governance.

The AUC was associated to several events within the course of the project, and specific meetings were organised with representatives of the Congress statutory body in order to receive feedback on the implementation of the Congress recommendations.

Roundtable with the delegation of Ukraine to the Congress: Agenda

Roundtable with the delegation of Ukraine to the Congress: News item

Good governance in metropolitan areas in Ukraine and in Europe

Following a request from Kyiv city council, a roundtable on the governance of metropolitan areas was organised to discuss the increasing role of big municipalities as engines for political, economic and cultural development. The aim of the Roundtable was to provide Ukrainian local and regional elected representatives with the opportunity to exchange experiences with European counterparts on metropolitan governance models and practices in metropolitan areas, as well as to discuss key challenges for such cities.

Reform of the legal status of local councillors in Ukraine

Following a request of the Committee on State Building, Regional Policy and Local Self-Government of the Parliament of Ukraine, a “Roundtable on Rights and Duties of Local Councillors in Ukraine” was organised jointly to discuss the eventual reform of the status of local councillors.

More specifically, Ukrainian parliamentarians, members of associations of local and regional authorities, local councillors, representatives of Ukrainians NGOs, experts, and members of the Congress discussed ways to enhance the accountability local councils as well as the responsiveness to citizens’ needs.

“Study on the Ukrainian Law on the Status of Local Councillors”: English | Ukrainian

Video recording of the meeting: Ukrainian

Gender equality at local level: challenges and opportunities in Ukraine

The Congress, together with the Association of Ukrainian Cities (AUC), organised a workshop in February 2018 to discuss the challenges and opportunities related to gender equality at local level in Ukraine. It aimed to promote gender-sensitive policies at local level, and more particularly the role of national associations of local authorities in supporting their members in this respect.

Through an interactive programme which combined peer exchanges between representatives of European associations of local and regional authorities and inputs from local and international experts, the participants of the workshop debated on topical issues specific to gender equality, gender mainstreaming and gender sensitive policies at local level.

Further to the invitation by the Ukrainian authorities, the Congress deployed an enlarged delegation – including 28 members from the Congress itself, 11 from the Parliamentary Assembly and four from the EU Committee of the Regions – to observe the local elections held on 25 October 2015. From 1 to 3 October 2015 a pre-election visit was organised in Kyiv. On Election Day, 24 Congress’ teams, involving in total 56 observers from 25 European countries, monitored the procedures in some 240 polling stations, aimed at electing Heads, Mayors and Councils at different levels of territorial government. The entire Congress mission was closely co-ordinated with other international organisations, notably OSCE/ODIHR and the observers from the European Parliament.
On the whole, the voting and counting processes on E-Day were competitive, well organised and transparent in most of the country and the campaign, in general, showed respect for the democratic process. 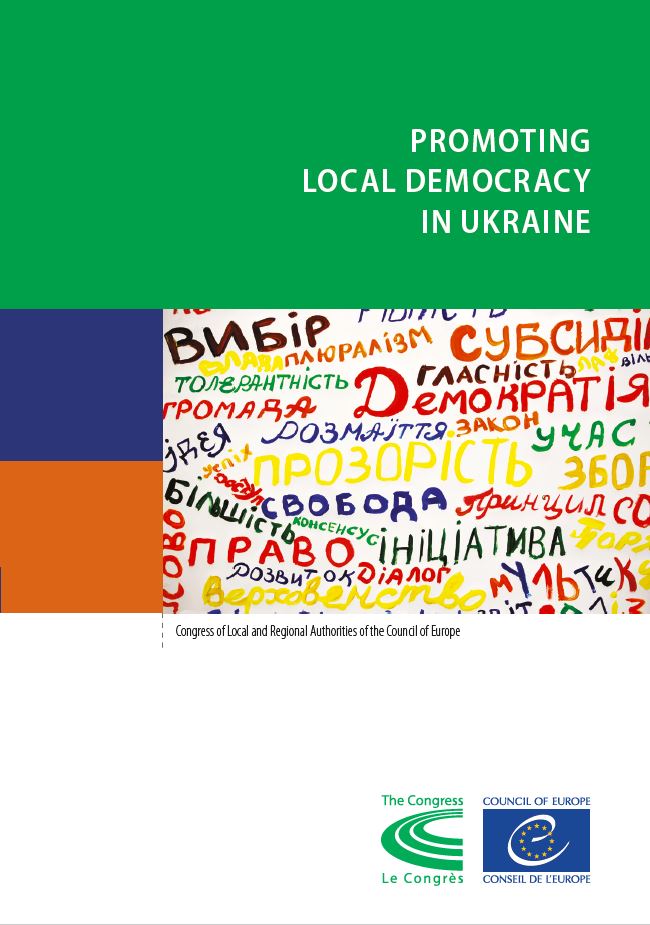 Metropolitan governance in Europe and in Ukraine 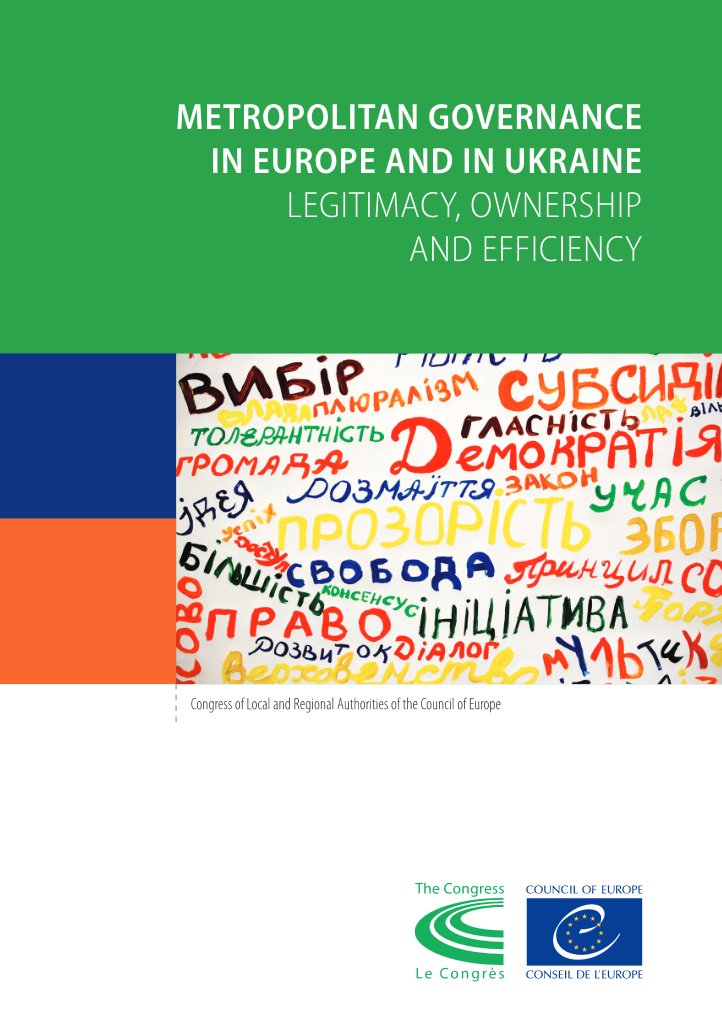 Study on the status of local councillors 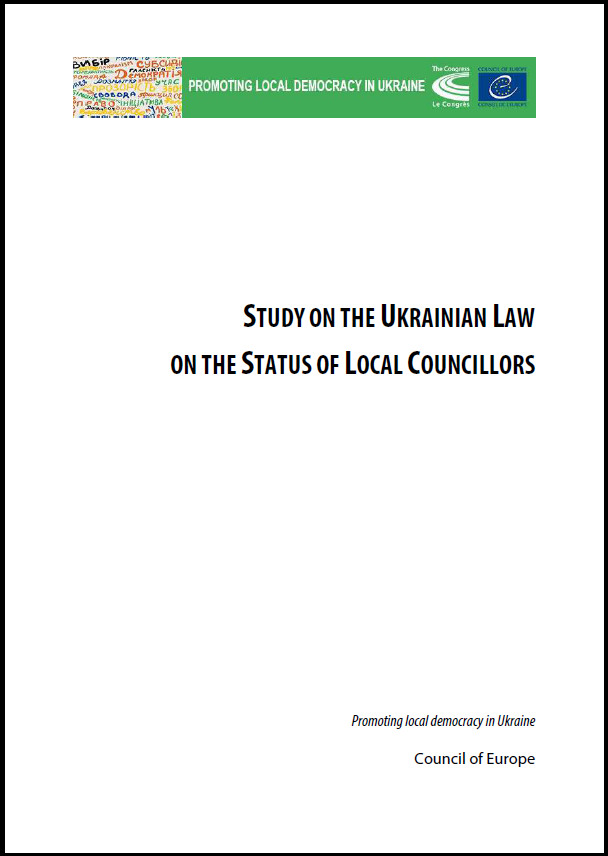 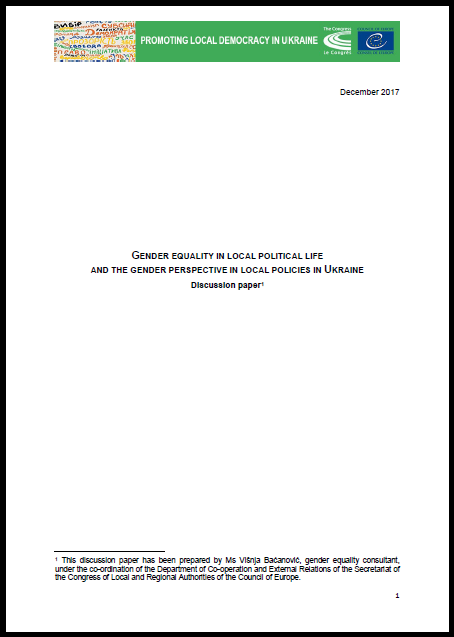 Preventing and Combatting Sexism at Local Level in Ukraine: A Guide for Women and Men in Local Politics 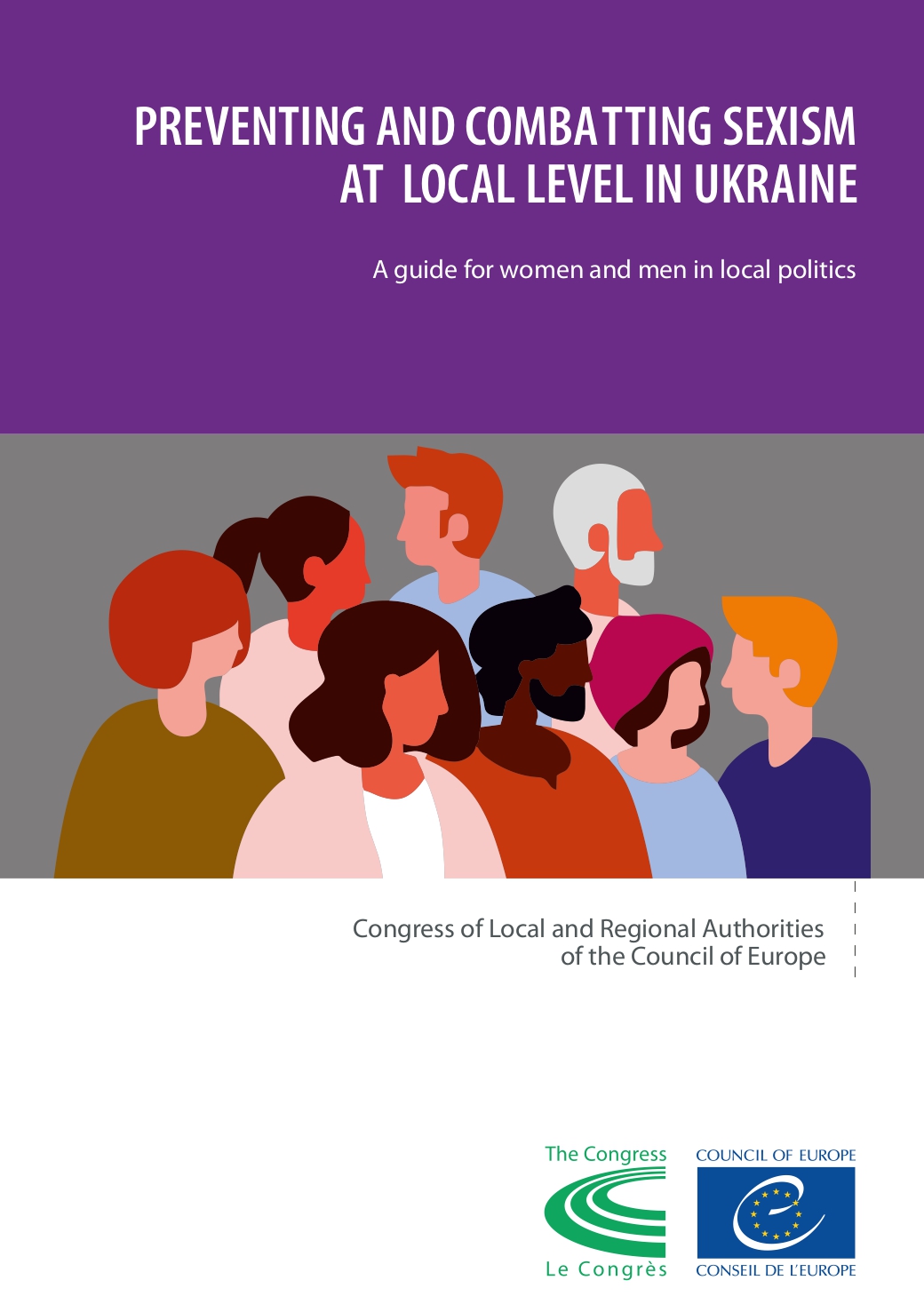 Handbook on transparency and citizen participation 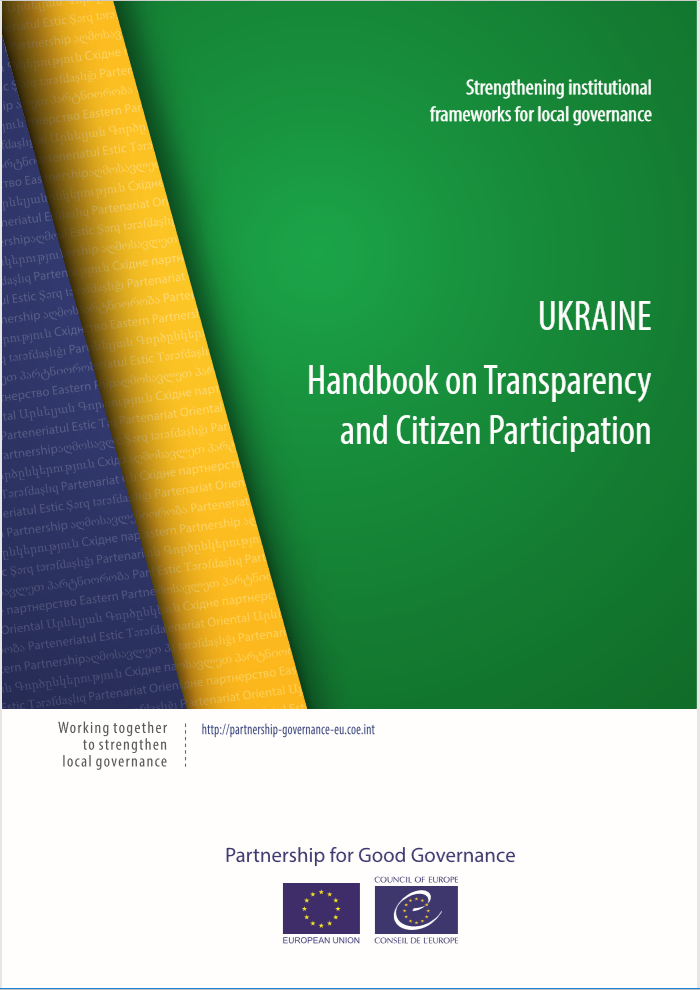 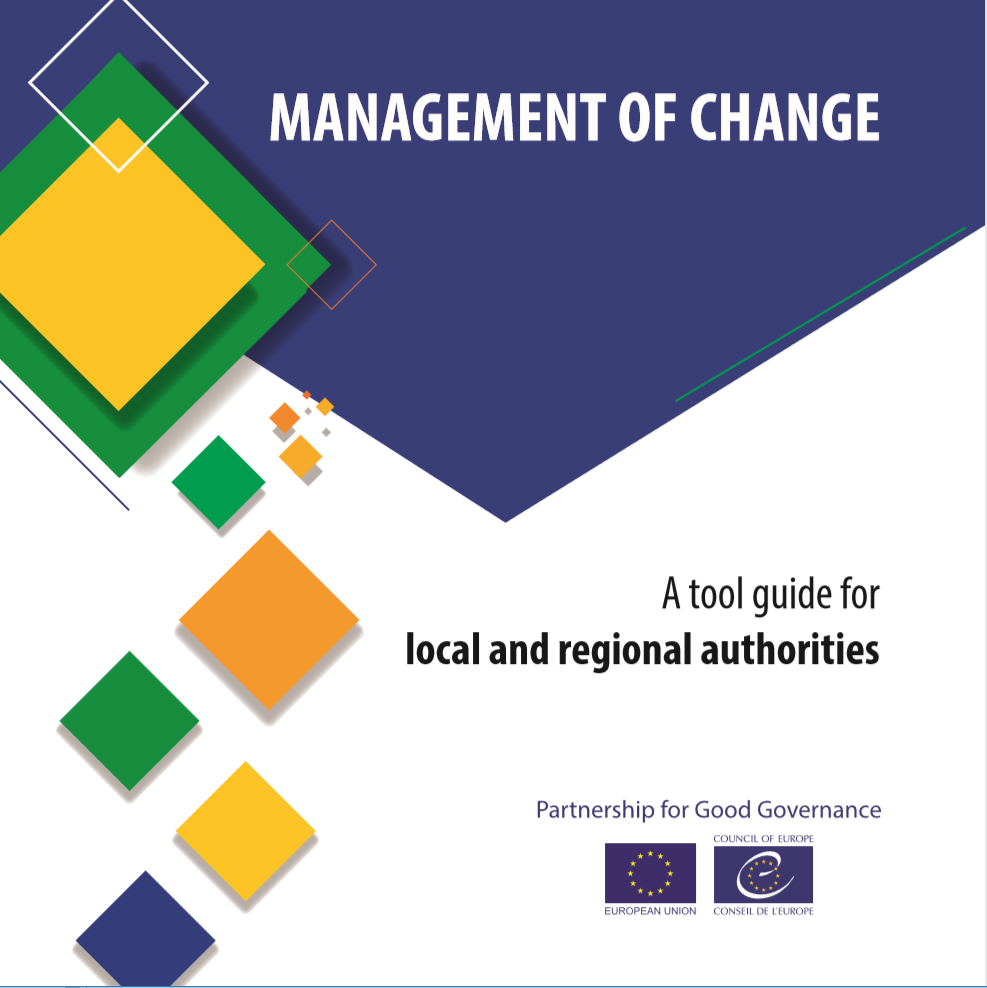