Transparency as a tool to prevent corruption

How to increase citizens’ trust in local authorities, and vice-versa; how to improve local governance and what are the roles and responsibilities of each stakeholder; how to include gender perspective in local policies and what are the main ingredients for sustainable local democracy - these were the topics discussed during the seminar on “Engaging citizens in local affairs for greater transparency”, held in Kyiv, Ukraine, on 19-20 December 2017.

Mayors, local councillors, young local leaders and representatives of national associations of local authorities had the opportunity to exchange experiences and discuss the good practices resulting from local initiatives on transparency and citizen participation implemented in the municipalities of Baranivka, Chernivtsi, Fastiv, Netechytsi, Nemishaeve, Kremina, Pervomaysk and Slavutych.

The gender perspective in local public policies was underlined as an important pre-requisite of successful local democracy which would ensure equality in access, opportunities and quality of services provided to both women and men.

Moreover, a ‘Handbook on transparency and citizen participation in Ukraine’ was developed, within the Congress co-operation activity programme, to support Ukrainian local authorities in their efforts in preventing corruption and in promoting ethical, transparent and inclusive policies. It was presented to the participants who acknowledged it as a useful and practical tool for local elected representatives, local public administration and civil society.

This event is part of the project “Promoting local democracy in Ukraine”, as part of the Council of Europe Action Plan for Ukraine 2015 - 2017. It aims to improve the implementation of democratic principles in Ukraine by enhancing the institutional and leadership capacities of local elected representatives, and by disseminating good practices of local democracy nationwide.

Ukraine joined the Council of Europe on 9 November 1995, ratified the European Charter of Local Self-Government on 11 September 1997 and its Additional Protocol on the right to participate in the affairs of a local authority on 2 September 2014. Countries which have ratified the Charter are bound by its provisions. The Charter entails compliance with a minimum number of rights and principles, which are the European bedrock of local self-government. The Congress of Local and Regional Authorities of the Council of Europe ensures respect for these principles. 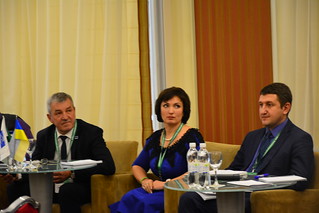