“Only strong municipalities can build a strong Ukraine” - A dialogue of mayors with the Prime Minister, Government and parliamentarians in Ternopil 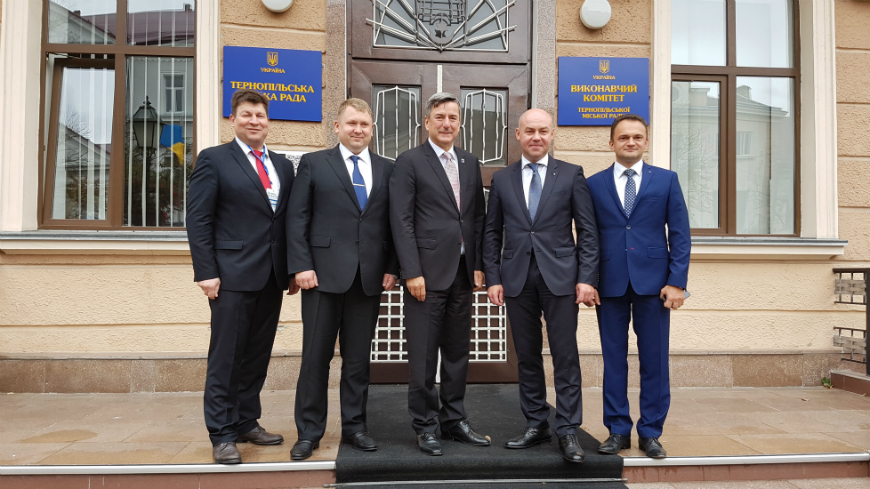 “Today’s dialogue is a strong message of Ukraine’s commitment towards the decentralisation reform, self-government and systematic policy dialogue between all levels of governance”, said the Congress Secretary General Andreas Kiefer at the ‘Day of the Dialogue with the Government’ organised by the Association of Ukrainian Cities (AUC) in Ternopil, Ukraine, on 24 September 2018. This forum between Ukrainian central and local authorities has been initiated and facilitated by the AUC for discussion and consultation between all relevant stakeholders involved in the reform process.

In a panel discussion on the ‘Status and perspectives on the decentralisation reform’ in presence of the Ukrainian Deputy Prime Minister for Regional Development, Gennady Zubko, the Mayor of Kyiv and President of the AUC, Vitali Klitschko, and more than 400 Ukrainian mayors, the Congress Secretary General underlined the key role of the AUC in consultation processes: “As fully fledged partners of a multilevel governance system, national associations of local and regional authorities, such as the AUC, play a vital role in consultations between central and local authorities”, he declared. Similarly, “local authorities play an important role not only in promoting democratic values, but also in accelerating the pace of development and providing a whole range of services that are essential to the communities’ well-being”, he added.

In light of the 30th anniversary of the European Charter of Local Self-Government, the Congress Secretary General stressed the “relevance of the Charter as a unique international legal instrument which enshrines the principles of subsidiarity and proximity, and protects local self-government”. He also praised the commitment of the Ukrainian government to the Charter and the values it represents, and for recognising it as the guiding principle for the decentralisation reform in Ukraine. Moreover, the ratification of the Additional Protocol on the right to participate in the affairs of a local authority is yet another proof of the determination to the implementation of democratic principles on the local level.

Previous to the AUC annual event, the Congress Secretary General met with the Mayor of Ternopil Serhii Nadal, the Deputy Mayor, Vladyslav Stemkovski, and the Council Secretary, Viktor Shumada, who presented a range of approaches to citizen participation and to insure transparency in relations between local authority and its constituencies. Exchanges continued in the presence of the chairperson of the Youth Council, during which Andreas Kiefer invited the City of Ternopil to join the European Local Democracy Week organised by the Congress. This would be a logical new initiative for the city that has been awarded several European Prizes by the Parliamentary Assembly of the Council of Europe.

In a brief meeting with the Executive Board of the AUC, the Secretary General of the Congress reaffirmed the continuous support of the Congress and its President to the efforts undertaken by the Association members towards the decentralisation process in Ukraine as a whole.