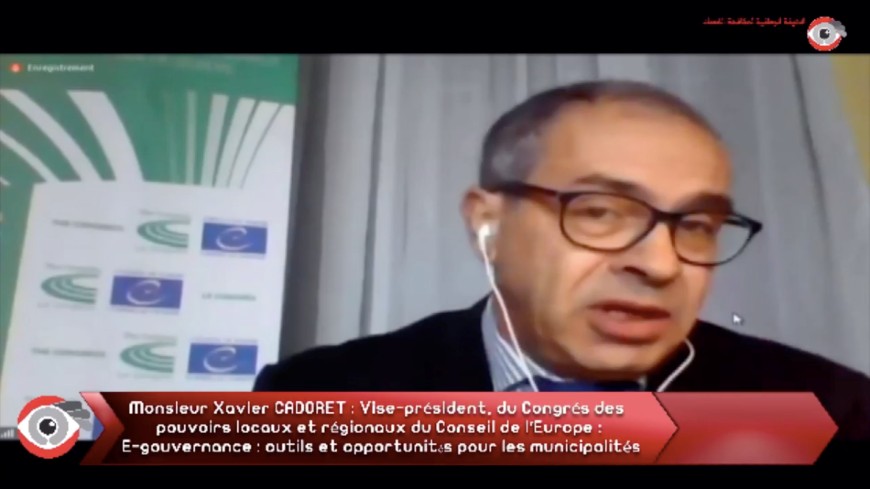 "The implementation of e-governance by local authorities makes it possible to involve citizens in decision-making processes concerning budget, public procurements and contracts, and allows for the development of efficient and rapid public services that meet the population’s needs," said Xavier Cadoret (France, SOC/V/DP), Vice-President of the Congress, at the Tunisian Authority Against Corruption (INLUCC), on 9 December 2020.

Speaking during the round table on integrity and transparency in the era of digital revolution, the Vice-President stressed that e-governance, when implemented at local level, makes it possible to fight corruption and strengthens democracy and citizens' trust in their representatives.  "The fight against corruption and the promotion of ethics is one of the priority areas of the cooperation between the Congress and Tunisia," he added.

Mr. Cadoret noted that the decentralisation process currently underway in Tunisia has highlighted the will of the people to combat corruption, especially at local level, when considering the nature of the competences exercised and citizens demands with regards to their institutions’ and local representatives’ duty to accountability and transparency. "The use of new technologies by local and regional authorities, accentuated by the COVID-19 crisis, also reinforces the country's determination to pursue its efforts against corruption and to establish an open government, as enshrined in the Constitution and the Code of Local Authorities in the country," highlighted the Vice President.

He praised Tunisian municipalities that are committed to e-governance through the local Open Government Partnership program, whose efforts have made it possible to provide several municipal services online. Moreover, he reaffirmed the Congress’ commitment, within the framework of its South-Med Partnership, to accompany territorial reforms and strengthen decentralised governance in Tunisia. This in turn will help Tunisian local and regional elected officials and their associations to fully enjoy their competences and implement the principles of good governance, as well as ensuring that their interests are taken into account fairly by other levels of governance.

This activity is part of the South-Med Partnership programme adopted by the Congress in 2017, the purpose of which is to support territorial reforms and strengthen decentralised governance in beneficiary neighbouring countries. This programme contributes to implementing the local and regional dimension of the Council of Europe policy towards neighbouring regions, in particular the Neighbourhood Partnerships with Morocco and with Tunisia (2018-2021). The activities organised in this framework benefit from financial support by Liechtenstein, Norway and Spain.