Use of languages at local and regional levels: promoting a practical approach to meet with citizens expectations 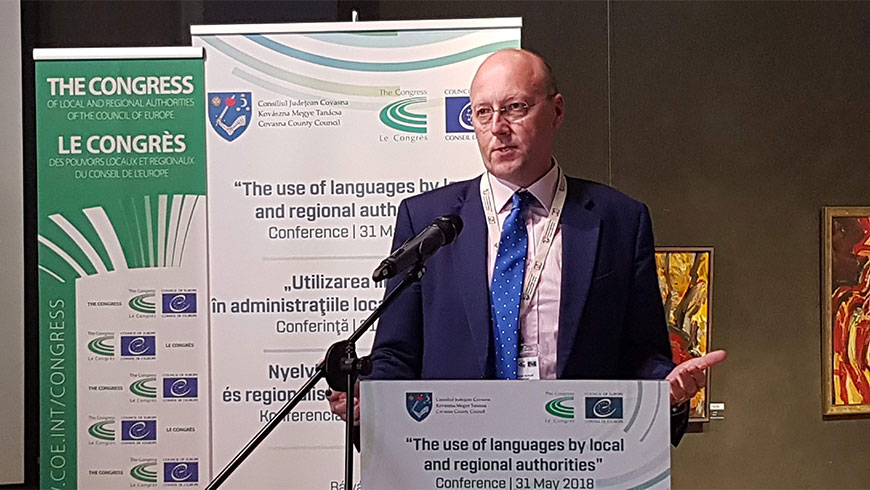 The Congress organised a Conference on the use of languages by local and regional authorities, in Covasna County, Romania, on 31 May 2018. This conference is the first step in the preparation of a report on this issue to be presented for adoption by Congress members in 2019.

“We must have a practical approach and focus on our citizens. The main challenge is how to provide them with the best governance and public services,” stated Andrew DAWSON (United Kingdom, ECR), Congress Rapporteur, in his concluding remarks.  “If that involves using more than one language, then we need to work out what is the best way of doing this,” he underlined.

The Congress report will focus on how linguistic diversity can be handled by local and regional authorities to the benefit of all concerned. It will examine, in particular, how minority or regional languages are used in local and regional assemblies, in the interaction with the administration and citizen participation, in place names and in the access to public services. The Congress has received several complaints on such issues with regard to the implementation of the European Charter of Local Self-Government.

The Congress will consider the issue of languages in the light of the European Charter for Regional and Minority Languages, which is celebrating its 20 years in 2018. Its Article 10, related to administrative authorities and public services, encourages the use of regional or minority languages by local and regional authorities on whose territory there is a large number of residents who are users of these languages.

The Congress work on the use of languages at local and regional levels is developed in the framework of the priorities of the Croatian chairmanship of the Council of Europe which include the protection of the rights of minorities.