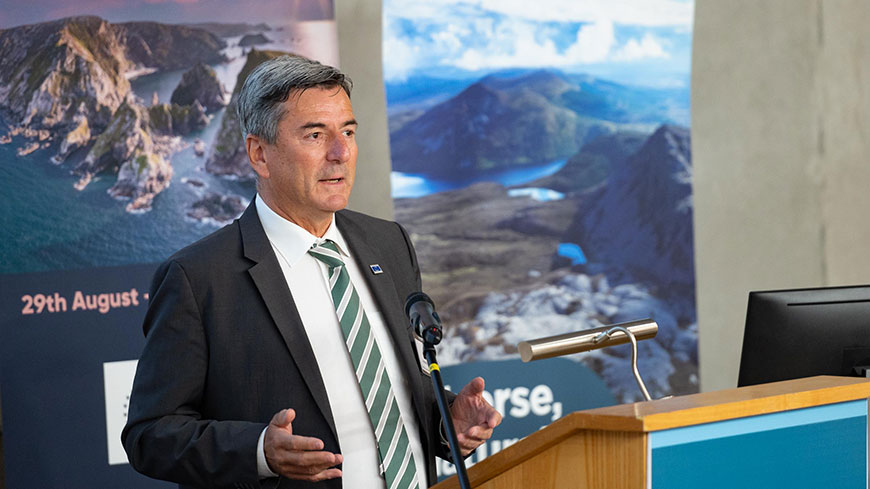 "In the face of the current crises, democratic institutions need to be “reinvented” with citizens’ involvement – and in particular young people – to make sure that citizens have constant access to governance, not limited to elections alone," stated Congress Secretary General Andreas Kiefer, on 30 August 2022, at the opening of the Assembly of European Regions' (AER) Summer Academy, in Letterkenny, County Donegal, Ireland.

"Local and regional authorities are best placed to engage young people directly in decision-making and democratic processes," he insisted, recalling that the "necessity of youth participation" - which is one of the priorities of the Irish Presidency of the Committee of Ministers - has been promoted by the Congress for decades, notably through the European Charter on the Participation of Young People in Local and Regional Life and through several reports, the most recent of which are on the role of local and regional authorities in strengthening youth work (2021), the future of young people in rural areas (2022) and on children's involvement for sustainable cities (2022).

"Participation means engaging with young people on an equal basis," the Secretary General stressed, pointing out that the Congress is the only international organisation to allow young people to sit in a European assembly alongside local and regional elected representatives. Developed in the framework of its "Rejuvenating Politics" strategy, this initiative offers youth delegates from the 46 Council of Europe member states the opportunity to contribute, without voting rights, to debates during Congress sessions and committee meetings.

Congress Youth Delegate Leonard Wilks (Switzerland) took part in the debate on “Youth and regional government” which focused on how regions can better promote youth engagement and get young people truly involved in decision-making processes within their communities, from youth councils to entrepreneurship and other forms of civic activism.

The Assembly of European Regions (AER) has been a statutory partner of the Congress since 10 February 2017 and can attend, without voting rights, the meetings of the Congress Bureau and committees. In addition, a co-operation agreement was signed between the Congress and the AER on 25 February 2014, with a view to collaborating on matters of common interest, strengthening their complementarity and developing synergies.