Online event on 7 December: "Covid-19: Local and regional authorities on the front line" 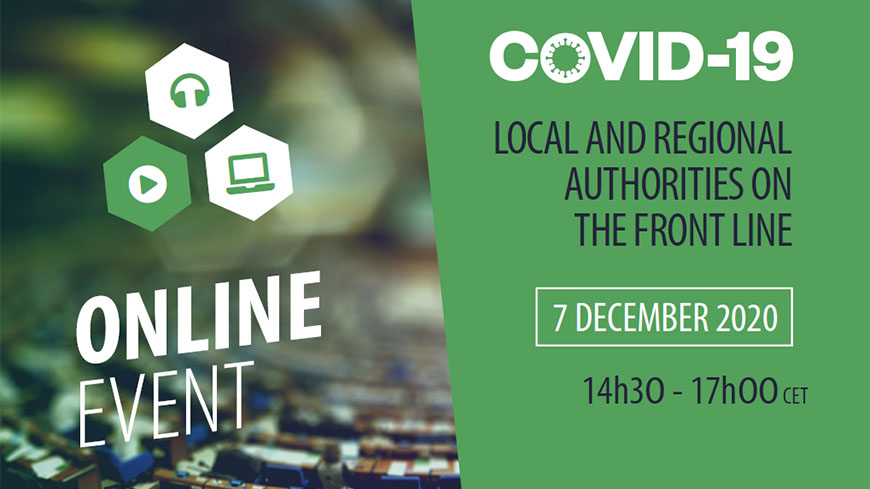 Local and regional authorities are on the front line in containing the spread of Covid-19 and mitigating the impact of the epidemic. In order to hear the stories of those who have been organising, coordinating and delivering responses to the crisis in towns and cities, provinces and Départements, regions and Länder, the Congress of Local and Regional Authorities of the Council of Europe is organising an online event "Covid-19: Local and regional authorities on the front line", on Monday, 7 December 2020 from 14h30 to 17h00 CET.

The first debate (14h30-15h30) will build on the Athens Declaration and examine how to respond effectively to a public health crisis in full respect of human rights, democracy and the rule of law. It will be opened by Anders Knape, President of the Congress of Local and Regional Authorities, and will include statements by Marija Pejčinović-Burić, Secretary General of the Council of Europe, and, via video message, Michael Roth, Minister of State of the Federal Foreign Office of Germany, Special Representative of the Federal Government for the German Presidency of the Committee of Ministers of the Council of Europe.

The second debate (15h30-17h00) will be devoted to the specific role of local and regional authorities. It will include statements by Gunn-Marit Helgesen (Norway, EPP/CCE), President of the Chamber of Regions, Xavier Cadoret (France, SOC/G/PD), President of the Chamber of Local Authorities, Kostas Bakoyannis, Mayor of Athens, and Gabriele Neff (Germany, ILDG), Chair of the Congress Current Affairs Committee. They will share their reflections with Congress members, youth delegates and partners for local democracy on the challenges being faced by local and regional authorities.

The results of the discussions will contribute to the transversal report on “Ensuring the respect of the European Charter of Local Self-Government in major crisis situations”, which is currently being prepared and will be presented at the Congress session in March 2021.

On the occasion of this event, youth delegates will present via video messages the projects they have carried out in their communities.

The event will be preceded, in the morning, by the 5th Statutory Forum of the Congress which will bring together the members of the Bureau, the Presidents and Vice-Presidents of the national delegations as well as the Chairs of the Committees and political groups.