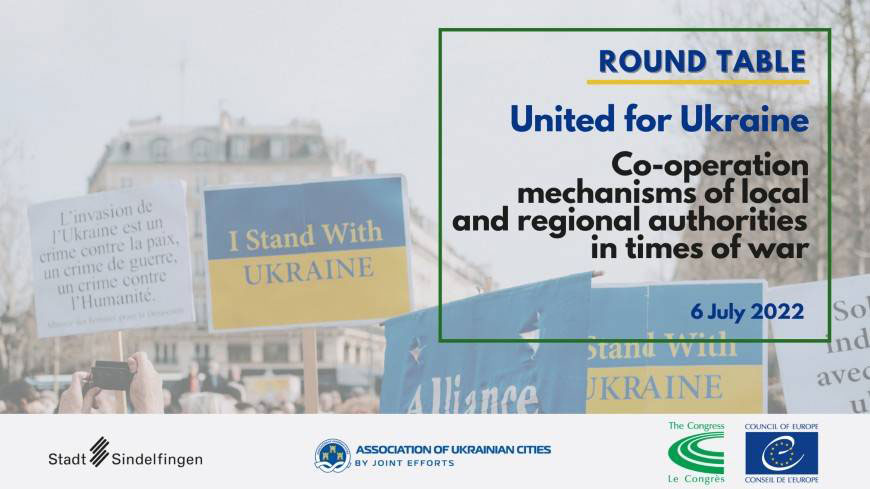 “The rebuilding and preservation of democracy is a daily struggle and co-operation between local and regional authorities from Ukraine and other European countries is key to enlarging the scope of solidarity and turn it into concrete results,” stressed President of the Congress of the Local and Regional Authorities Leendert Verbeek, during the opening of the online Round Table “United for Ukraine: Collaboration mechanisms of local and regional authorities in times of war”, on 6 July 2022. He emphasised that “fostering good governance and upholding the democratic values is the necessary foundation for the post-war renewal”.

Due to high commitment of the Association of Ukrainian Cities and their outreach potential, as much as 350 Ukrainian local and regional authorities and their national associations gathered to identify new and improve the existing co-operation mechanisms with their peers from other European countries. With interventions from different national, regional, local and international stakeholders, as well as from leaders of major European associations of municipalities and regions, joint priority actions were identified, and mutual trust was named as the cornerstone for Ukraine’s revival.

President of the Congress Chamber of Local and Regional Authorities and Mayor of Sindelfingen Bernd Vöhringer (Germany, EPP/CCE), notably highlighted the Cities4Cities platform as an example of solidarity and co-operation established between cities.

Congress Secretary General Andreas Kiefer recalled that “co-ordination and joint action are absolutely necessary”. “There is an obvious interdependence between all actors and the constructive multilevel dialogue is crucial for the successful rebuilding of a stronger democratic Ukraine. The fight against corruption at all levels must be one of the high priorities for the reconstruction period”, he concluded.

This event is organised as part of the project “Strengthening local democratic governance in Ukraine” implemented by the Congress of Local and Regional Authorities within the Priority Adjustments to the Council of Europe Action Plan for Ukraine 2018-2022. The project aims at rebuilding capacities of local authorities and their national associations to address unprecedented humanitarian, social, economic and environmental challenges they face as a consequence of war, to reconstruct democracy and rebuild resilience at local level, as well as to implement post-war recovery measures in Ukraine.