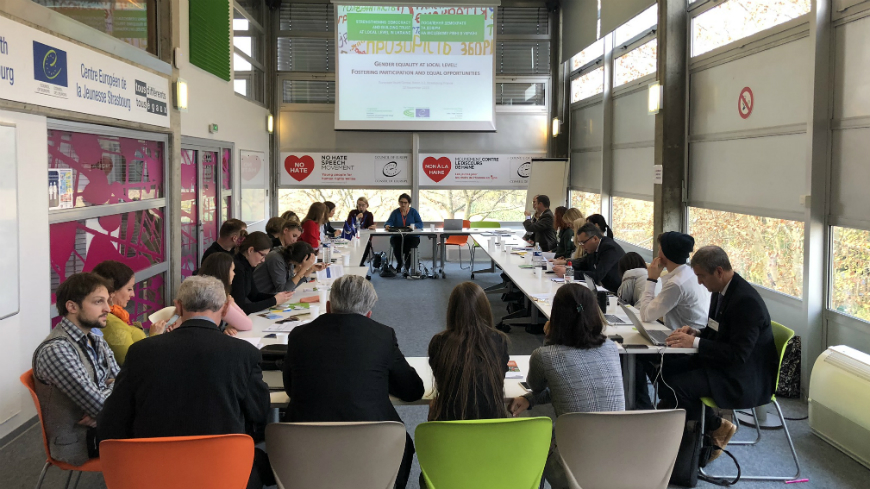 “We need innovative gender parity mechanisms, a legal framework to protect women against machismo in politics, legitimized quotas, awareness raising for children from primary school and gender mainstreaming in education programmes from nursery school onwards”. These were the proposals of the thirty representatives of Ukrainian and Georgian local authorities at the workshop on "Gender equality at the local level: promoting participation and equal opportunities" organised on 22 November 2018 by the Congress of Local and Regional Authorities of the Council of Europe.

The interactive exchanges allowed elected officials and agents of local authorities to work in groups and reflect on ways to bring about change at the local level in terms of gender equality and equal opportunities in their respective countries. They discussed the challenges, stereotypes and cultural barriers, and ways to overcome them, by proposing concrete initiatives in their communities: training, communication campaigns in schools, awareness-raising on the economic benefits of parity, media actions and the involvement of NGOs and civil society, among others.

Participants stressed the responsibility of every citizen, both men and women, and the need for continuous awareness-raising at all levels, as two conditions for eliminating macho stereotypes and reflexes associated with a patriarchal culture which suggests that women should first and foremost take care of children and family. "The fact that Ukraine and Georgia are working together on this issue can be an asset in our respective countries for advancing the cause of gender equality," they stressed.

The Association of Ukrainian Cities and the National Association of Local Authorities of Georgia presented their respective activities in promoting gender equality - including the promotion of the European Charter for Equality of Women and Men in Local Life - and initiatives to harmonise national legislation with gender equality objectives.

With regard to Ukraine, participants welcomed the adoption of several texts by the government to accelerate the implementation of international standards on gender equality. This also requires better protection of women against domestic violence, based on a legal framework, in accordance with the principles of the Istanbul Convention, in particular with regard to prevention, protection of victims and prosecution of perpetrators.

The workshop enabled participants to consolidate a network for the exchange of knowledge and experience. This will allow them to share the results of their respective projects, developed both during the workshop and during their participation in the 2018 edition of the World Forum for Democracy.

The workshop was organized by the Congress on the sidelines of the World Forum for Democracy (19-21 November 2018) on the theme "Women/Men: Same fight?" in which the Ukrainian and Georgian delegations participated. It was a follow-up to meetings between local authorities in both Georgia and Ukraine, notably the 5th World Summit of the Partnership for Open Government, held in Tbilisi, Georgia, in July 2018, and in order to implement the Memorandum of Understanding signed between the Association of Ukrainian Cities and the National Association of Local Authorities of Georgia in June 2017.

This study visit was organised as part of the project "Strengthening democracy and building trust at local level in Ukraine", implemented as part of the Council of Europe Action Plan for Ukraine 2018-2021. The objective is to improve the quality of local democracy in Ukraine by strengthening institutional frameworks and supporting local authorities and their national associations in their efforts to promote ethical decision-making and more civic, inclusive, responsive and transparent local governance.

Marité MORAS, Head of Unit, Cooperation and External Relations Department, Congress of Local and Regional Authorities of the Council of Europe, Tel: +33 3 88 41 41 22 33