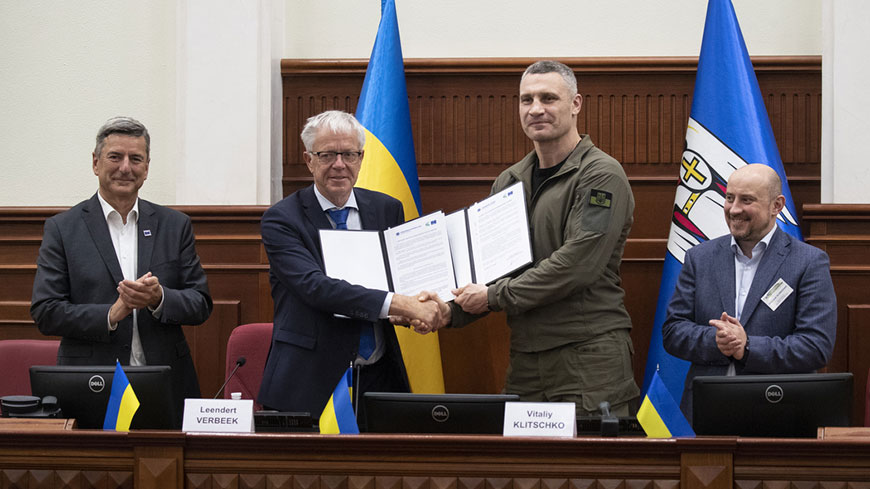 At the invitation of the Association of Ukrainian Municipalities (AUC), the President of the Congress of Local and Regional Authorities of the Council of Europe, Leendert Verbeek, paid a visit to Ukraine from 1 to 4 June 2022, accompanied by the Secretary General of the Congress, Andreas Kiefer. This visit follows the adoption of a Declaration condemning the Russian Federation's war against Ukraine and expressing Congress' support.

On this occasion, the Congress President and Vitali Klitchko, Chair of the Association of Ukrainian Cities (AUC) and Mayor of Kyiv, signed a joint declaration calling for the reconstruction of Ukrainian communities and the restoration of the functioning of local authorities in line with the European Charter of Local Self-Government.

“Today, we need to build synergies between all actors in the field to ensure the revival of Ukrainian communities destroyed by the war.” stated the Congress President at the opening of the Forum of Ukrainian Municipalities "reVIVEd Ukraine - reVIVEd communities", organised the same day by the AUC. He called for intensified efforts to preserve the Council of Europe's common European values: human rights, the rule of law and democracy.

Congress President also held bilateral meetings with the Chairperson of the Kyiv City Council, the Minister for Communities and Territories Development of Ukraine, the Chairperson of the Committee on Organization of state power, local self-government, regional development and urban planning of the Verkhovna Rada of Ukraine, the Secretary of the Presidium of the Congress of Local and Regional Authorities under the President of Ukraine and the Head of the Ukrainian Delegation to the Council of Europe Congress.

The programme also included visits to the Kyiv Oblast to examine the situation on the ground. The Congress delegation will meet the mayors of Bucha and Zhytomyr - two cities which are part of the Cities4Cities platform launched with the support of the Council of Europe Congress to help Ukrainian cities - as well as Fastiv and Chelm, Poland.