Congress delegation meets authorities in the City of Mostar 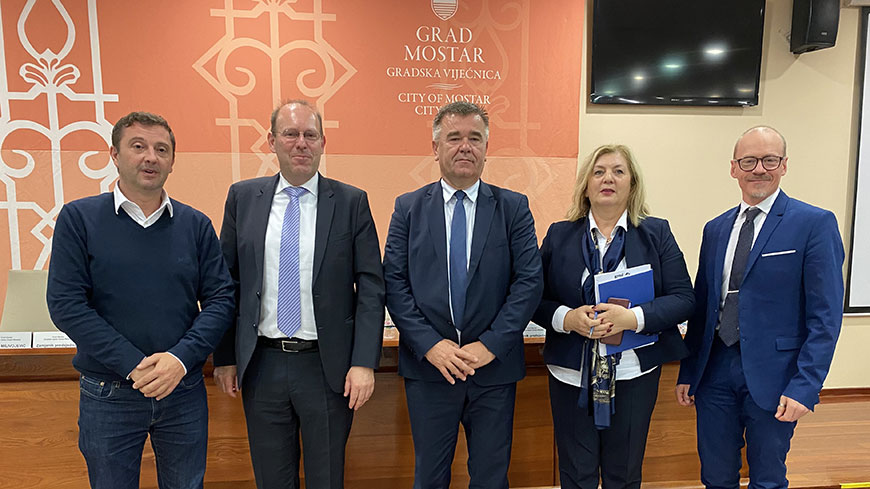 The President of the Congress Chamber of Local Authorities, Bernd Vöhringer, and the Chair of the Current Affairs Committee, Thomas Andersson, paid a visit to Mostar, Bosnia and Herzegovina, on 9 November 2021.

The discussions focused on the follow-up to the Citizens’ Assembly recommendations and future co-operation in the framework of the Council of Europe Action Plan for Bosnia and Herzegovina for 2022-2025.

President Vöhringer expressed satisfaction with the inclusiveness of the deliberative process and its outcomes. “The forthcoming City Council session where representatives of the Citizens’ Assembly will present their recommendations and an action plan for their implementation is a proof of the commitment of the newly elected authorities towards the population in Mostar”, he underlined.

Thomas Andersson, Congress Spokesperson on Youth highlighted the importance of engaging young people, particularly in the context of Mostar where the citizens had been deprived of the right to vote and get elected for 12 years before the December 2020 local elections.

On this occasion, the President of the Congress Chamber of Local Authorities also held a meeting in Sarajevo with the Head of the Delegation of Bosnia and Herzegovina to the Congress, Marinko Cavara, and Milan Dunovic, member of the delegation, respectively President and Vice-President of the Federation of Bosnia and Herzegovina. They discussed the positive achievement in Mostar, the strengthening of representative democracy through deliberative democracy and the work of the Delegation in the Congress.

This visit was organised in the framework of the project “Building democratic participation in the City of Mostar” implemented by the Congress of Local and Regional Authorities within the Council of Europe Action Plan for Bosnia and Herzegovina 2018-2021. The aim of the project is to create opportunities for citizens to engage in a deliberative process and increase their contribution to local decision-making. In turn, this process will foster dialogue at local level and contribute to the revitalisation of democratic processes in the City of Mostar.