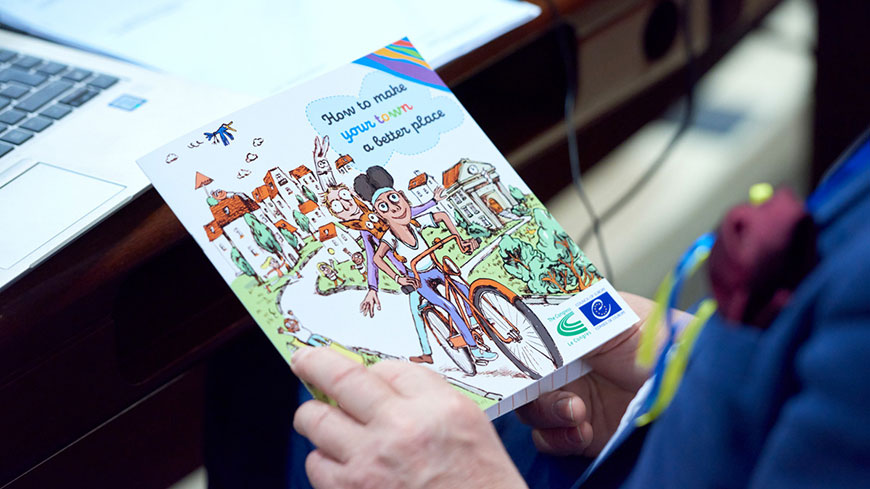 The Congress has published a new booklet on “How to make your town a better place” to raise children’s awareness of the Sustainable Development Goals (SDGs) as part of the United Nations 2030 Agenda. The aim is to encourage 6- to 11-year-olds to get involved in the implementation of SDGs in their own communities. The booklet comes with guidelines for local and regional authorities.

In the Resolution drawn up by the Rapporteur, Brigitte van den Berg (Netherlands, ILDG), and adopted on 23 March 2022 at the 42nd Session, the Congress encourages local and regional authorities to use this learning tool to raise awareness and teach children about SDGs by helping them to understand, through specific examples, how they can contribute to the implementation of SDGs in their towns and cities. This would enable them to come up with their own proposals to be shared with their local authorities or in forums set up specifically to facilitate children’s participation. The Congress also calls on the associations of local and regional authorities in member States to translate, disseminate and promote the Booklet and the Guidelines widely through their networks. “Children’s participation does not only benefit children, but can offer real added value when developing public policies”, said Ms van den Berg during her presentation of the project.

This was backed up by Grace O’Hagan of the United Kingdom, a 10-year-old member of the advisory group of children that helped to produce the booklet. “Adults who think children cannot do this type of work or should not get involved need to know that children want to understand the world around them and be able to help”, she said.

In her contribution to the debate, the Rapporteur of the Parliamentary Assembly of the Council of Europe (PACE), Baroness Doreen E. Massey, welcomed the Congress initiative, which was in keeping with the PACE’s strategy. She pointed out that children’s rights were closely interlinked with the work of local and national public bodies and that there were many initiatives being carried out between parliamentarians, local and regional authorities, mayors, teachers, youth workers and children. “We can build on our respective experiences to strengthen the protection of children’s rights and encourage children to bring their energy and creativity to discussions and polices which may affect them,” she said in conclusion.