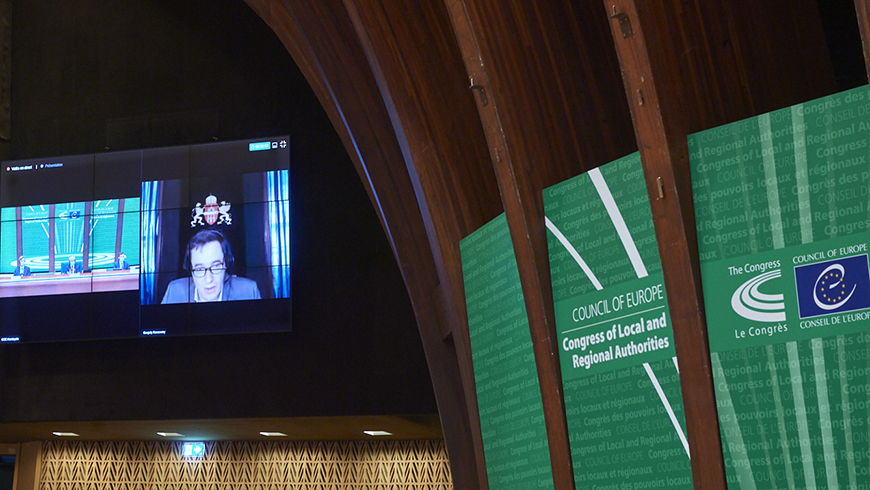 Participating in the 40th Session on 17 June, Budapest Mayor Gergely Karácsony, emphasized the principles of decentralization and subsidiarity and the importance for central governments to work together with local authorities to preserve democratic values by strengthening and developing local government. “Local and regional interests should be given much greater prominence in European decision-making” he stated.

He subscribed to the Congress priorities for the coming years and underlined the importance of local and regional authorities contribution to the UN Sustainable Development Goals.

He stressed that cities are laboratories of democracy and that experience shows that there is no stable democracy without a cohesive society. “The foundation of a functioning democracy lies in the strength of the community” he added while calling to focus on people and develop strategies through intensive participatory processes involving the citizens and joint consultations with professional and non-governmental organizations.

Referring to the current health situation, he noted that throughout the continent central governments have offered a partnership to local authorities to fight the pandemic but regrettably this has not been the case in Hungary where the crisis and austerity measures taken by the government have taken away 40 percent of the capital’s operating budget, largely been left alone in fighting the epidemic.

Mayor Karácsony recalled that the city will host the Budapest Forum - Building Sustainable Democracies including the Pact of Free Cities Mayors Summit with new members to join the coalition initiated by mayors of Budapest, Warsaw, Prague and Bratislava to strengthen democracy and the rule of law.

Members of the Congress had an exchange with the Mayor of the Budapest.

Invited to address the 40th Session of the Congress, the Mayor of Budapest, Gergely Karácsonya, believes that his city has been more effective in combating Covid-19 than the rest of the country. Despite the challenge faced by the Hungarian capital to its competences and resources, the experience gained during the pandemic confirmed that the local level is better able to respond quickly to such crises than the national level.

"From the start of the pandemic, Hungarian cities had to take on new tasks while seeing their funding reduced," deplored Gergely Karácsony, for whom the last 18 months have also revealed, beyond the disease alone, the problems that cities can encounter in terms of trade, transport and supplies in times of crisis. Returning to this point in response to a question from Marc Cools (Belgium, SOC/G/PD), he did not hesitate to describe as "plundering" the policy of financial recentralisation carried out by the state to the detriment of local authorities, and saw a risk of financial asphyxiation for the future. However, the efforts of the municipality have resulted, for example, in better protection of homeless people and vulnerable groups from infection by the virus.  Budapest has done better than the rest of the country in this area, even though the whole of Hungary has been particularly affected by the disease.

Health, however, is far from being the only area affected by the recentralisation carried out by the central government, which according to Mr Karácsony, appears to consider mayors as veritable "rivals". The consequences of this policy are felt at all levels, as illustrated by the topical issues discussed by Congress members with him. Budapest, for example, wants to build a 12,000-unit student city on the banks of the Danube, but a proposed private Chinese university on the site could jeopardise this programme. Asked about this by Hungarian youth delegate Daniel Franko, the mayor reiterated his firm opposition to this project, which he felt would aggravate the city's transport and housing problems.

Responding to a question from John Warmisham (United Kingdom, SOC/G/PD) on the situation of Roma in Budapest during the pandemic, Gergely Karácsony outlined the municipality's efforts to limit overcrowding and the risks of contamination among this population. But he acknowledged that many still live in real ghettos. He regretted, moreover, that the Hungarian education system, which is very unequal, further aggravates the situation of the Roma, who should be able to benefit from much more effective policies than those carried out by Hungary in recent decades. In response to a question from Rena Dourou, (Greece, SOC/G/PD), he stressed, on the other hand, that Budapest is not concerned by tensions between communities and "living together" works well, despite his claims that the central government sought to stir up tensions during the 2015 wave of migration.

The mayor went on to outline some of Budapest's sustainable development objectives, including urban transport and green industry, but also regretted that the state was neglecting its commitments by limiting the resources allocated to these programmes.

Asked by Gudrun Mosler-Törnström (Austria, SOC/G/PD) about the recent Hungarian law on "paedophilia", Gergely Karácsony said the law, which he said would be "unenforceable", aimed to "suppress the visibility of LGBTI people", thus denying this reality. "The government hopes to gain votes like this”, he regretted, “and thus distract the attention of citizens from the real problems of the country”. He deplored this "posture" which creates tensions and would prefer that a real dialogue be established with all citizens.