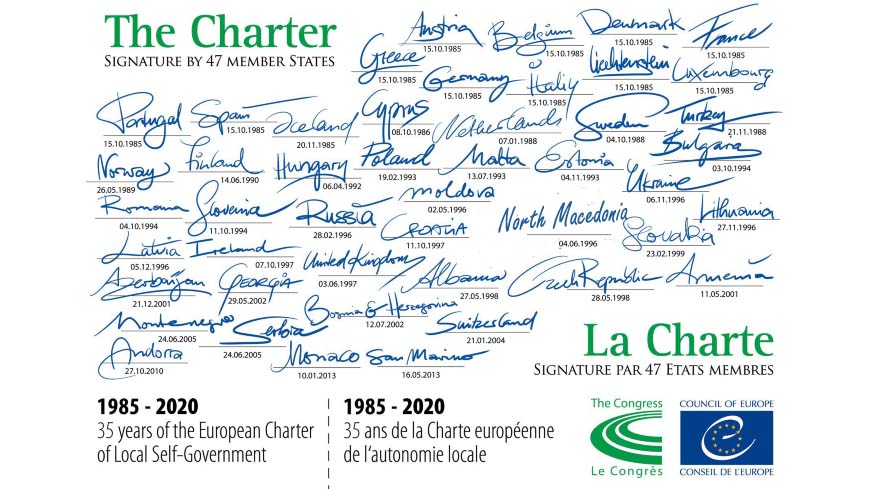 On the occasion of the 35th anniversary of the opening for signature of the European Charter of Local Self-Government, the President of the Congress of Local and Regional Authorities, Anders Knape, made the following statement:

“The European Charter of Local Self-Government was opened for signature on 15 October 1985. Today, 35 years later, it is one of only 17 Council of Europe Conventions – out of 223 – which have been ratified by all our 47 member States.

Over the years, the Charter has shown its relevance for promoting local democracy which is the foundation of the European model of pluralist society. The Charter is a landmark document and, since its entry into force, it has been the legal basis for around 180 Congress monitoring reports and recommendations which led to changes in the legislation and constitutions of the member states of the Council of Europe aiming at improving local self-government and implementing the subsidiarity principle in Europe.

Also in times of crisis, such as the one we are currently experiencing with the COVID-19 pandemic, the Charter provides the legal basis for the Council of Europe member States to defend the principles of local democracy and self-government and to develop responses for safeguarding the functioning of democratic institutions.

Based on this acquis, the Congress has prepared a new Contemporary Commentary on the explanatory memorandum to the Charter that reflects 35 years of its evolution and provides for its modern understanding. I am proud of this accomplishment and the adoption of the Contemporary Commentary by the Congress in December 2020, at the very moment of the celebration of the Charter’s 35th anniversary.”

The European Charter of Local Self-Government lays down standards for protecting the rights of local authorities. Opened for signature on 15 October 1985 and entered into force on 1 September 1988, this convention requires all 47 Council of Europe member states which have ratified it to comply with a number of principles which form the European bedrock of local self-government. The Congress of Local and Regional Authorities is responsible for evaluating the application of the Charter, in each Member State, through a regular monitoring, country-by-country.