Anders Knape: "Joining forces at all levels of government to overcome the COVID-19 crisis” 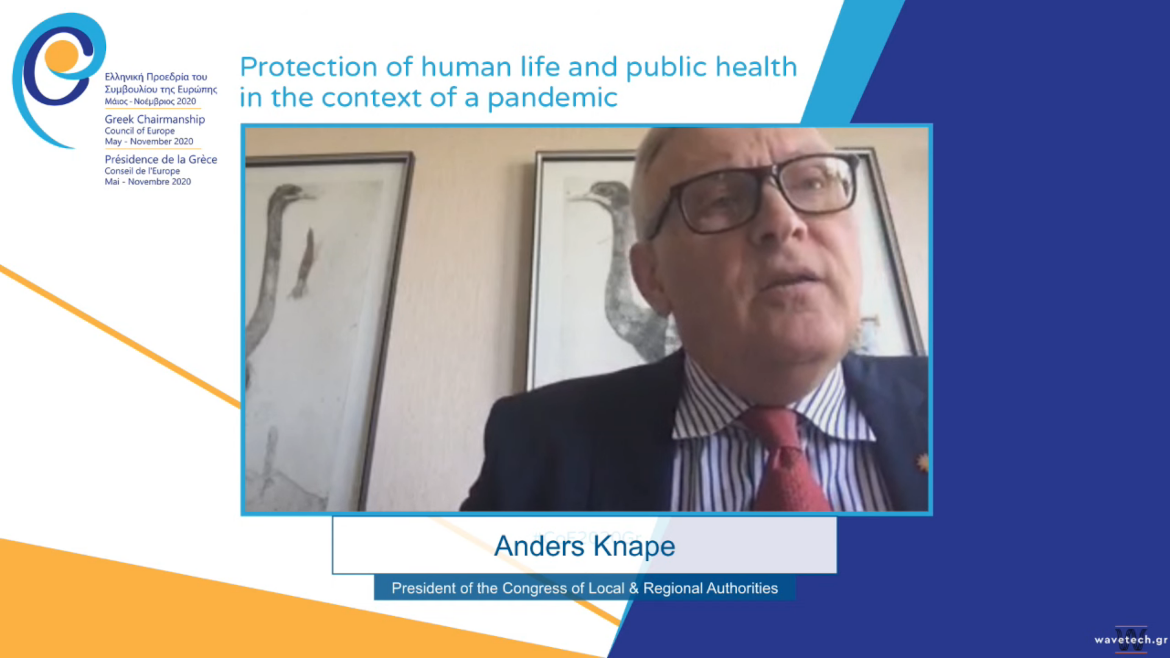 Congress President Anders Knape spoke at the inter-institutional meeting on "Protection of human life and public health in the context of a pandemic", organised by the Greek Chairmanship of the Committee of Ministers of the Council of Europe, on 3 June 2020, by video conference.

"In the face of the COVID-19 crisis, cities and regions had to react urgently to provide concrete responses, as close as possible to the citizens," he stressed. "The Congress has collected these examples of actions on the ground, as well as those of partner institutions and networks, in order to share them with local and regional actors," he explained, presenting the COVID-19 web platform launched by the Congress.

"Like all actors confronted with the COVID-19 crisis, we have had to review our working methods by relying on digital tools," said Anders Knape. In particular, the Congress pursued remote contacts with local and regional elected representatives, organised exchanges with the secretaries of delegations from the 47 Member States, and launched a series of webinars for young delegates. The meeting of the Bureau of the Congress, which is currently being prepared, will also be held by video conference on 9 June.

With regard to the situation of local democracy in Europe, the President of the Congress referred to his video exchanges with elected representatives such as the Mayor of Istanbul and the concern he expressed in a statement about the suspension of mayors in south-east Turkey and the ongoing undermining of local self-government in the country during the pandemic. The situation of local democracy in Latvia was also an issue of concern for the Congress which called for the suspension of the territorial reform under way in the country to allow adequate consultation.

"In the framework of its future work, the Congress will examine several issues that have been highlighted in the context of the COVID-19 crisis," said Anders Knape. In particular, Congress members will hold debates in committees (21 September 2020) and at the next session (27-29 October 2020) on themes including the postponement of local elections, the management of (temporary) changes in the distribution of competences, the transfer of additional responsibilities to municipalities without the necessary means, and the general application of the principles of local and regional self-government.

The results will be reflected in the Congress' priorities for 2021-2026 and will serve as a basis for the Congress' contribution to the Council of Europe's work on lessons learned and assistance in building resilient societies in the post-COVID-19 period.

"The priority in the coming months for all levels of government will be to join forces to overcome the crisis, help citizens and prepare for the consequences of COVID-19," said Anders Knape. "The Congress - and the local and regional authorities it represents - is ready to contribute to the ministerial session in Athens in November 2020," he concluded.