41st Session of the Congress of Local and Regional Authorities of the Council of Europe, 26-28 October 2021 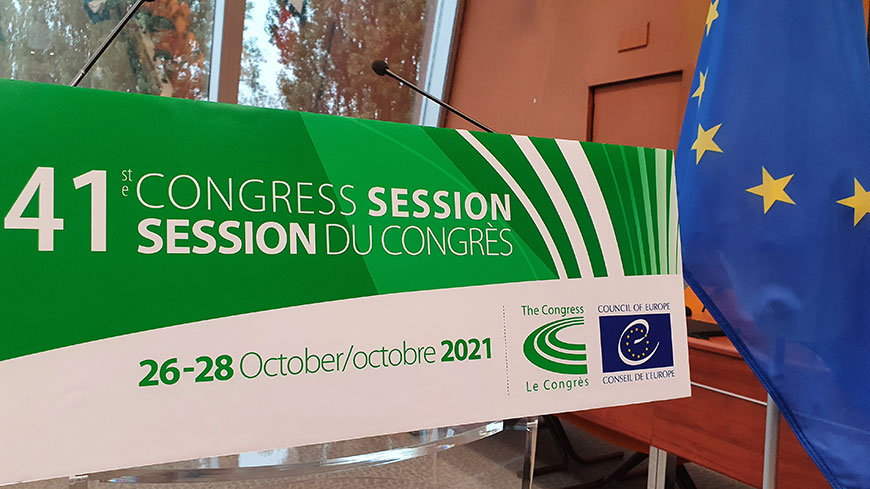 The Congress of Local and Regional Authorities held its 41st session, from 26 to 28 October 2021, for the first time in person in Strasbourg since the Covid-19 pandemic.

Within the context of the sanitary crisis, the Congress held a debate on the different levers of the "Post-Covid Recovery" with Carlo Monticelli, appointed Governor of the Council of Europe Development Bank, and Ulrik Vestergaard Knudsen, Deputy Secretary General of the Organisation for Economic Cooperation and Development (OECD).

The challenges of migration issues were discussed during two debates: "Regions and Diaspora" and "Migration: Continuing Challenges for Cities and Regions", with the participation of Ambassador Drahoslav Štefánek, Special Representative of the Secretary General of the Council of Europe on Migration and Refugees, and Erini Dourou, Congress Rapporteur on Migration Issues.

The Congress adopted the monitoring reports on Albania, Cyprus, the Netherlands, North Macedonia, and Spain as part of its monitoring of the compliance of Council of Europe member states with the European Charter of Local Self-Government.

On the agenda were also debates on “Working conditions of elected representatives in times of hate speech and fake news on the internet”, “Home-sharing platforms: challenges and opportunities for municipalities", "Inter-regional and cross-border co-operation for better territorial integration in Europe” and "Lifelong education for lifelong employment of young generations: a challenge for the regions". In addition, within the framework of the Congress initiative "Rejuvenating Politics", youth delegates presented projects from the field.

Among the personalities invited, in addition to the appointed Governor of the Council of Europe Development Bank and the Deputy Secretary General of the OECD, were the Deputy Minister of the Interior of Albania, Romina Kuko, the Minister of the Interior of Cyprus, Nicos Nouris, the State Secretary responsible for Security Policy of Hungary, Péter Sztáray, the Deputy Minister for Local Self Government of North Macedonia, Zoran Dimitrovski, and the Secretary General for territorial coordination of  Spain Miryam Alvarez Páez .

The ceremony for the 7th edition of the Dosta! - Congress Prize was also held. The prize was awarded to the municipalities of Torres Vedras (Portugal), Argostoli (Greece) and Salford (United Kingdom) for their initiatives aimed at ensuring the inclusion of Roma and Travelers.