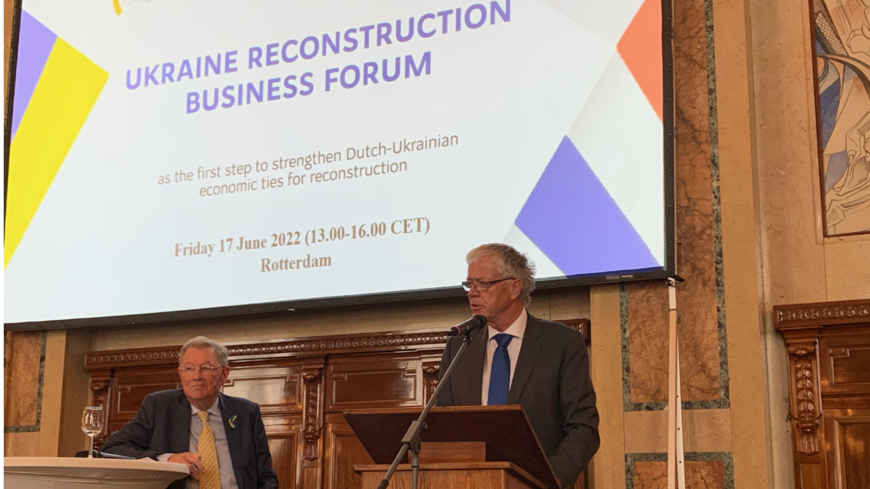 The president of the Congress of Local and Regional authorities spoke at a forum for the Reconstruction of Ukraine in Rotterdam, Netherlands, Friday 17 June 2022.

“The mayors and local councillors are a vivid example of the courage and resilience of Ukrainian people and local authorities in defending the country and democratic values” he declared, underlining that their resistance comes from the long-lasting work of embedding fundamental democratic values in the local communities.

The president stressed the role of local and regional authorities in the reconstruction of Ukraine and the important cooperation and mutual support between Ukrainian local communities and other European cities, facilitated by the Cities4cities platform.

The President also referred to the joint declaration he signed with Vitali Klitschko, Chair of the Association of Ukrainian Cities and Mayor of Kyiv, calling for the reconstruction of Ukrainian communities and the restoration of the functioning of local authorities in line with the European Charter of Local Self- Government.

The one-day Business Forum for the Reconstruction of Ukraine in Rotterdam took place on 17 June 2022. The event was organized by the embassy of Ukraine in the Kingdom of the Netherlands with the support of Rotterdam City Hall and Shtichting OpenDoorUkraine.  Over 250 guests from the public and business sectors attended.