The Advisory Council on Youth at the World Forum for Democracy 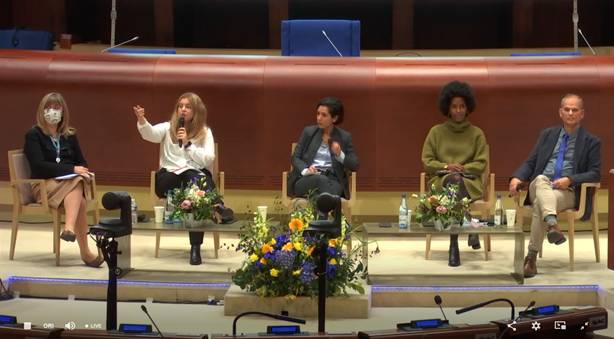 The 9th World Forum for Democracy this week asked the burning question on everyone’s lips: On a planet in crisis, does democracy have what it takes to save the environment?

The Advisory Council on Youth, which this year put the climate crisis on the agenda of the youth sector’s co-managed statutory bodies, responded to the call to contribute to this debate from which they hoped there would be no “Blah blah blah”, to quote Greta Thunberg, but constructive dialogue.

Bureau member Alice Bergholtz co-moderated the final plenary session together with Snežana Samardžić Marković, Council of Europe Director General of Democracy, in which Sarah El Haïry, French Minister of State for Youth and Engagement, attached to the Minister of National Education, Youth and Sport, responded to questions from the delegates.

Alice also had the opportunity to exchange views on “Threats to environmental defenders” in a panel with the participation of Council of Europe Commissioner for Human Rights, Dunja Mijatović.

Pegah Moulana moderated a talk on “Youth climate activism” with a panel composed of young climate activists from across the world and Mila Lukić moderated a lab on “Joining forces: Public-private collaborations for the environment”.

As in previous years, a delegation of young people took part in the Forum in an initiative organised by the Council of Europe Youth Department.

The Forum was organised in the context of the partnership between the Council of Europe, the City of Strasbourg, the Region Grand Est, the European Collectivity of Alsace and the French Government, Under the High Patronage of Emmanuel Macron President of the French Republic.