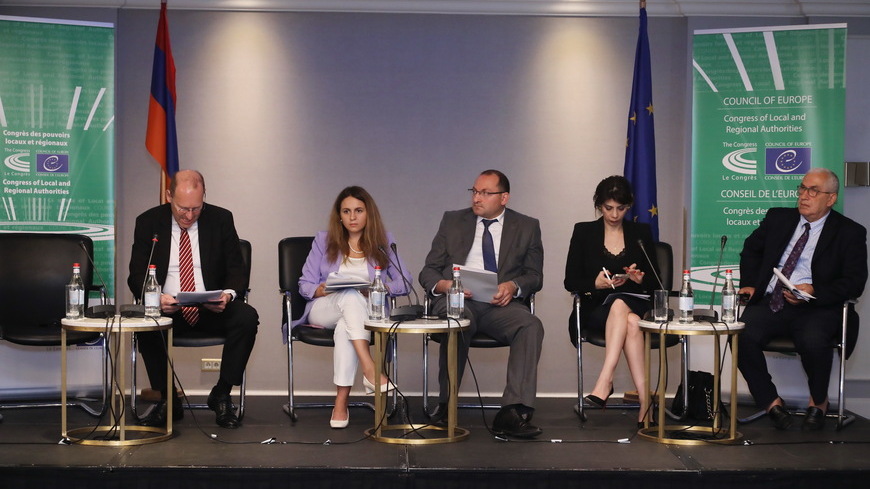 “Armenia has an excellent opportunity to embark on the path of decentralisation and building a system of multi-level governance in the post-amalgamation context” stressed Bernd Vöhringer (Germany, EPP/CCE), President of the Congress Chamber of Local Authorities, at the opening of the conference on decentralisation in Armenia, in Yerevan on 28 June 2022.

Congress Rapporteur Bryony Rudkin (United Kingdom, SOC/G/PD), presented the Congress recommendation on local democracy in Armenia, adopted in June 2021 following the monitoring of the application of the European Charter of Local Self-Government in the country. She particularly highlighted the importance of consultations with local authorities, raised the issue of the limited role of local authorities in delivering public services, and particularly stressed that the powers of the municipalities had not been extended to allow them to regulate and manage a substantial share of public affairs under their own responsibilities.

The Conference allowed representatives of local and national authorities, including from 26 communities as well as the Ministry of Territorial Administration and Infrastructure, the Ministry of Justice and the Cabinet of the Deputy Prime Minister, to discuss the immediate needs of local communities in the post-amalgamation context, as well as the roles of the stakeholders and their actions in the decentralisation process.

Participants also discussed the risks and opportunities presented by decentralisation for open and ethical local governance. Vladimir Prebilic (Slovenia, SOC/G/PD) Congress Spokesperson on ethics and prevention of corruption, underlined that “while decentralisation carries risks of corruption, this can only happen in the absence of proper safeguard mechanisms and procedures”. He pointed to the need to establish mechanisms of ensuring accountability and integrity that lead to increased trust of citizens in their local elected representatives and in public institutions.

The Conference was organised by the Ministry of Territorial Administration and Infrastructure of Armenia and the Congress of Local and Regional Authorities of the Council of Europe, under the project “Strengthening the Communities Association of Armenia and Transparent, Participatory Local Governance in Armenia”. The project is implemented by the Congress within the Council of Europe Action Plan for Armenia 2019-2022, with the financial support of the Government of Switzerland in the framework of the Swiss Program for the improvement of the local self-governance system in Armenia 2019-2023.