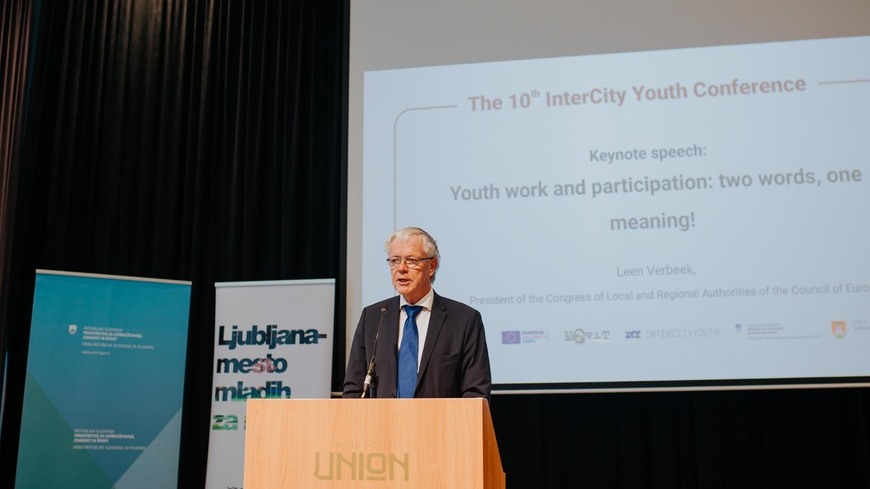 Leendert Verbeek, President of the Congress of Local and Regional Authorities of the Council of Europe, addressed the participants of the 10th InterCity Youth Conference during his keynote speech on “Youthwork and participation – two words, one meaning”.

“Young people deserve a say – a seat at the table – especially on issues that concern them directly, such as youth work.” The President stated, insisting on the importance of youth participation in building modern and democratic communities. “Youth work can have a real impact on our societies as a whole”, the President continued, saying that “it cannot be an afterthought.”

“There isn’t one single recipe to build quality youth work policies, so the Congress gives tools and guidelines that can be adapted, from big cities to rural villages,” the President said, presenting the recent Congress report and flyer on youth work in cities and regions.

Furthermore, President Verbeek insisted that local and regional authorities should give young people opportunities for meaningful participation. “Real participation means having a say in decision-making, not just taking part in an activity” he declared, saying that this means engaging with young people on an equal basis. The President encouraged elected officials to use the Revised European Charter on the Participation of Young People in Local and Regional Life  which offers concrete tools that can be used to strengthen youth participation.

The 10th InterCity Youth Conference (IYC) was organized by Intercity Youth and the European network of local departments for youth work in line with the declaration of the 3rd European Youth Work Convention and as an important contribution to the Bonn process. Hosted by the City of Ljubljana, it brought together over 100 municipal stakeholders responsible for the provision of youth work in order to strengthen the role and capacity of local authorities in supporting knowledge-based, participatory youth work.