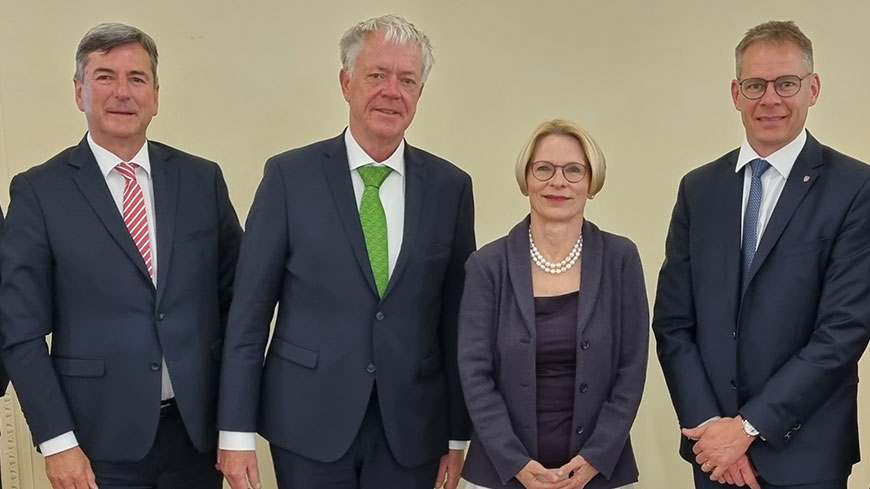 During an official visit to Switzerland from 30 April to 3 May 2022, the President of the Congress of Local and Regional Authorities, Leendert Verbeek, discussed with State Secretary at the Federal Department of Foreign Affairs Livia Leu the work of the Congress, the situation in Ukrainian cities, the budget and the co-operation programmes implemented by the Council of Europe and the Congress. "Our co-operation programmes have helped to develop a new generation of politicians, who take ownership of their responsibilities and new ways of exercising them. This is particularly visible in Ukraine at present," the President stressed.

With the mayor of Bern, Alec von Graffenried, the discussion focused on the specific problems of running a large city and the particular status of capital cities. The President recalled that in its particularly positive report on the monitoring of the situation of local and regional democracy in Switzerland in 2017, the Congress noted however "the importance of determining, through legislation, a framework, and arrangements regarding financing for the city of Bern, taking due account of its specific situation". The mayor stressed the importance of citizen participation in the projects and development of his city, underlining that his aim was to "change simple citizens into concerned citizens". The President confirmed that participatory democracy is a cross-cutting priority of the Congress, which has been implementing the additional protocol to the European Charter of Local Self-Government on the right to participate in public affairs for the past ten years. "This year we are celebrating the tenth anniversary of the entry into force of this Protocol, which responds to the growing aspiration of citizens to be consulted on issues that concern them directly," the President stressed.

“I am convinced that it is at the grassroots level, the level of our communities, that we can contribute to reviving and reinvigorating democratic processes," stated Congress President Leendert Verbeek at a meeting with the Union of Swiss Cities (UVS) and the Association of Swiss Municipalities (ACS) in Bern on 2 May. "For the Congress, national associations of local and regional authorities are our main interlocutors in the national setting of the member states," he added, praising Switzerland's exemplary democratic governance system. President Verbeek stressed, in particular, the role of national associations in implementing Congress resolutions, promoting the principles of the Charter and maintaining dialogue with national governments to defend the interests of local and regional authorities.

At the Institute of Federalism of the University of Fribourg, the President discussed with Didier Castella, State Councillor of Fribourg and member of the Swiss delegation to the Congress, the development of Fribourg and the other municipalities of the Canton. M. Verbeek underlined that in the current challenges faced by local and regional democracy federalism is a system that particularly suits to meet the demands of modern democracy such as citizen participation, inclusion and multi-level decision-making and accountability.