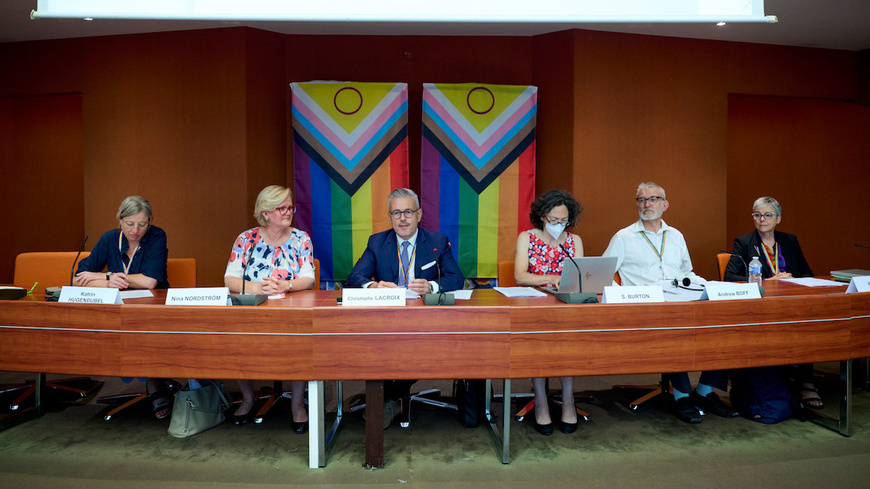 Andrew Boff (United Kingdom, ECR), Congress rapporteur on LGBTI issues, participated in the first meeting of the PACE Parliamentary Platform for the rights of LGBTI people in Europe on 20 June 2022 in Strasbourg, France.

“As national level representatives, you can vote laws to improve the situation. As mayors, city councillors and regional representatives, we can ensure the safety and respect for LGBTI citizens on the ground” he said, highlighting the important and successful cooperation between PACE and Congress to protect the rights of LGBTI people.

“Local and regional authorities are best placed to understand why there is anti-LGBTI sentiment in our towns and propose solutions.” he continued, underlining the importance of cities and regions in combatting hate against LGBTI persons. “With some national governments backsliding on rights of LGBTI people, cities and regions are the first line of defence for the protection of LGBTI rights, and they often go beyond national standards to do so.”

The Congress of Local and Regional Authorities has been working on LGBTI issues since 2007, including freedom of assembly and expression. In June 2021, the Congress adopted the report "Protecting LGBTI persons in the context of rising hate speech and anti-LGBTI discrimination: the role of local and regional authorities”. In addition, the Current Affairs Committee carried out an online fact-finding mission on the situation of LGBTI rights at local and regional level in Poland, the findings of which were approved on 10 February 2021. The Congress subsequently adopted the report “The role of local and regional authorities with regard to the situation and rights of LGBTI people in Poland” in June 2021.