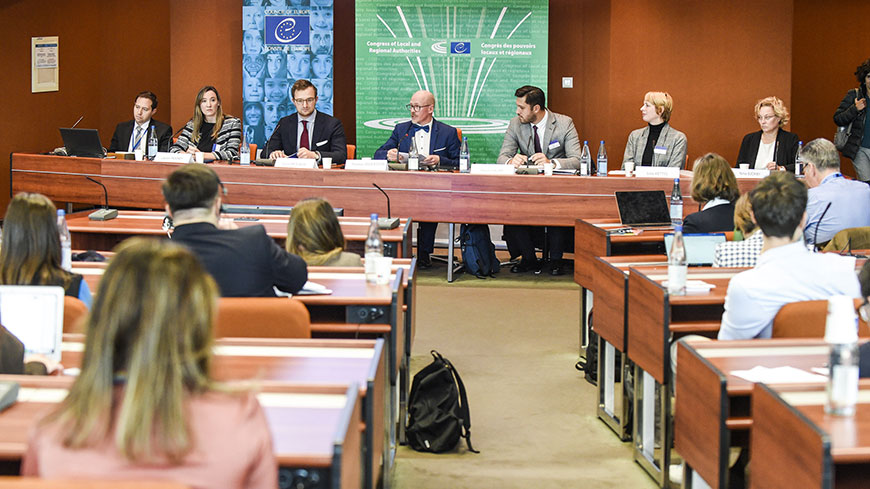 As its contribution to the 10th World Forum for Democracy, held in Strasbourg from 7 to 9 November 2022 under the theme "Democracy: a new hope?", the Congress of Local and Regional Authorities – the body in charge of strengthening local and regional democracy in the 46 member States of the Council of Europe – organised a working session (Lab7) on 8 November to address polarisation of society and greater democratic engagement as a way of countering it. Six initiatives presented at the Lab sought to respond, each in its own way, to the challenges of polarisation and to promote citizen engagement in the democratic process.

The challenges of today’s multiple crises – climate change, the Covid-19 pandemic, repercussions of the war in Ukraine – have exacerbated social and economic problems around the world, significantly reducing confidence in representative democracy. Extremism of all kinds is fragmenting societies and threatening constructive dialogue and social peace. "Listening, learning quickly and doing: these are the key phases of any strategy to combat polarisation," summarised Thomas Andersson, Chair of the Congress Current Affairs Committee and Lab7 moderator.

The Strategic Forecasting Toolkit presented by the International Republican Institute (IRI) in the United States is the result of three stages of project development. Born out of the observation of deliberative experiences in Colombia, Guinea and Sudan, the tool was primarily designed for countries in transition. First, it identifies the political and civil society actors who should be involved in the deliberative process, then maps out potential conflicts between different political groups and fractions, then sketches out potential transition scenarios and finally builds a consensus between stakeholders. Posted on the institute's website www.iri.org, "this analytical and practical tool can be adapted for other political contexts, including Europe", stressed Lauren Mooney and Louis Metcalfe, IRI experts. Mr Metcalfe’s presentation was welcomed by Andrew Boff, member of the Congress Monitoring Committee, stressing that this experiment could enable mayors to "better anticipate and prevent problems that aggravate polarisation in their municipalities", including through a "face-to-face relationship with their constituents".

The initiative undertaken by the city of Mostar in co-operation with the Congress responds to the need to rebuild democratic trust after a period of war, in a municipality where different ethnic and religious communities co-exist. According to Marin Culjak, Director of the Office of the Mayor of the City of Mostar, the holding of a deliberative citizens' assembly in July 2021, with participants selected at random to represent the overall population, was a great success. As part of the Council of Europe's action plan for Bosnia and Herzegovina 2018-2021, the project could inspire similar initiatives in other Balkan or European cities, especially as the Conference of INGOs, the Congress and the Council of Europe's Elections and Participatory Democracy Division have just launched an online tool for sharing experiences of this nature – the BePART platform. The platform allows civil society activists and representatives of local and regional authorities to draw inspiration from good practices in the field of civil participation, but also to share their own experiences and analyses. All interested parties can find projects in their region or area of interest and contribute to BePART.

Sharing and conceptualising experiences in different national contexts is also one of the objectives of the BRIDGE initiative, co-funded by the EU and carried out by the European Forum for Urban Security (Efus). Bringing together 13 European cities, the initiative seeks to assess the risk factors that aggravate polarisation and fuel the rise of extremism, but also the protective factors that strengthen social cohesion. Increasing cognitive complexity to prevent Manichean thinking and changing the mutual perception of "enemy groups" through informal encounters are some of the avenues that can be taken to fight polarisation, according to Julia Rettig, programme manager at Efus.

Young people are a key group in all the initiatives presented, but the experience of Valongo, a city of 100,000 inhabitants in Portugal, is unique in many aspects. For the past nine years, the local government has been implementing innovative deliberative procedures that include young people, sometimes even as young as six years old. “I will never forget the enthusiasm in the eyes of the 9–10-year-olds we involved in our discussions on urban planning," recalled Mayor of Valongo Jose Ribeiro. “It takes boldness and a sincere willingness to open up a dialogue with citizens and young people and encourage them to express themselves freely, without censoring them,” he continued, adding that “it is particularly through intergenerational dialogue that we can best fight against polarisation”.

Intergenerational dialogue is also one of the key objectives of the Assembly of European Regions' (AER) annual Summer Academy, which has been held since 1996 and acts as a "project incubator for inter-regional cooperation in Europe", according to the AER which invites regional representatives to the Summer Academy to work with young people who have been nominated by their regional authorities. Congress Youth Delegate Prodromos Tzounopoulos suggested that the Academy should be "better known among young Europeans" as an important tool for forming sustainable cooperation networks between regions, but also for creating spaces for deliberation that are vital for regenerating the democratic process. "Democracy is not a given, it withers if we forget to renew it," concluded Nina Björby, Regional Councillor of Västerbotten (Sweden) and AER Vice-President for Democracy, speaking at the close of the Lab.