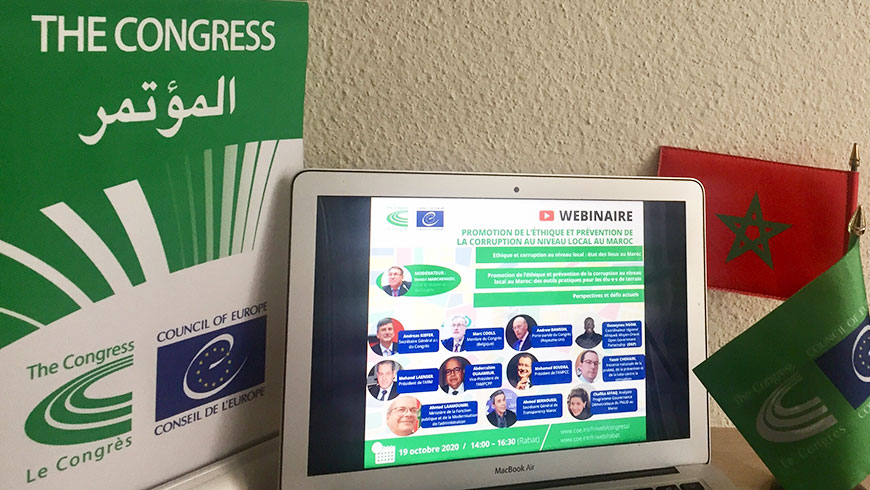 Representatives of the Congress, Moroccan associations of local and regional authorities and institutions involved in the fight against corruption met through a webinar held by the Congress on 19 October 2020 as part of the project on “Strengthening democratic governance at local and regional levels in Morocco”. This exchange, conducted by the Congress in the context of its South-Med Partnership, made it possible to present the standard-setting and practical tools that the Congress makes available to local and regional elected representatives in Morocco, to take stock of Morocco’s policies to prevent corruption at national, regional and local level and trace out the potential outcomes and main challenges of the implementation of these policies.

“Public ethics and preventing corruption at local and regional level are essential to gain public trust in the rule of law”, said Andreas Kiefer, Secretary General ad interim of the Congress, at the opening of the webinar. It is for this reason that strengthening the capacity of local and regional authorities and their associations to combat corruption and promote democratic governance is one of the focal points of the co-operation between the Congress and Morocco, which is the first country to have been granted Partner for Local Democracy status with the Congress in April 2019.

The Congress already began implementing co-operation and assistance activities for the development of democratic governance at local and regional level in Morocco from 2016 onwards. This work made it possible to establish strong ties with Moroccan associations and other stakeholders in the government and in parliament. In his address Andreas Kiefer pointed out that since it had devised the legislative framework for advanced regionalisation in Morocco, the Congress had implemented a series of joint projects designed to: foster increased political dialogue between European and Moroccan elected representatives; provide assistance with the drafting and implementation of legislation on decentralisation and local governance; help to strengthen the capacities of local elected representatives and their associations; and support the development of participatory democracy, with particular emphasis on the role of young people, women and civil society.

The Congress Spokesperson on promoting public ethics and preventing corruption at local and regional levels, Andrew Dawson (United Kingdom, CRE/ECR), pointed out that the question of preventing corruption arose every day everywhere in Europe, including in his own municipality in the United Kingdom. The six thematic reports published by the Congress in 2016 in its “Public Ethics” collection could serve as a toolbox for Moroccan elected representatives, through which they could draw on the experiences of their European counterparts. The European Code of Conduct for all Persons Involved in Local and Regional Governance adopted by the Congress in 2018, which applied to all public service providers, was in his view, a key means of promoting good governance, particularly where it came to preventing conflicts of interest and increasing transparency in the award of public contracts. Andrew Dawson also focused on the key concept of open government, which implies broader participation by citizens while applying the principles of good governance at local level, namely accountability, transparency, integrity, respect and non-discrimination, merit and impartiality.

Lastly, Marc Cools (Belgium, ILDG), Congress member and former Chair of the Association of the City and the Municipalities of the Brussels-Capital Region, welcomed local and regional government reform in Morocco and stressed the need to get citizens involved not only in short-term management but also in the planning of public sustainable development policies. Local elected representatives should be trained to manage their new powers and resources so that they can fully assume their responsibilities vis-à-vis voters.

The statements by Congress members were complemented by presentations by international experts from the Open Government Partnership (OGP) and the UNDP, who described their organisations’ approach to promoting public ethics and combating corruption, particularly by enlisting municipalities at local level. The Congress’s co-operation with Morocco forms part of an interconnected series of international projects in the area of corruption prevention including those of the UNDP, as presented by Ms Chafika Affaq, who is an analyst on the Democratic Governance programme, and those of the OGP, presented by Ousseynou Ngom, regional co-ordinator for Africa and the Middle East. Their statements highlighted Morocco’s role as a regional leader in the fight against corruption, while drawing attention to the long road ahead where it comes to reaching a satisfactory level of public ethics.

The Chair of the Moroccan Association of Chairs of Municipal Councils, Mohamed Boudra, pointed out that the process of decentralisation and regionalisation implemented following the adoption of the new Moroccan Constitution in 2011, calls for policies capable of preventing the “decentralisation of corruption”. As a result, the National Anti-Corruption Strategy (2016-2025) makes provision for the adoption of a series of implementing laws on local and regional authorities designed among other things to make it compulsory for elected representatives to declare their assets, to protect whistle-blowers, to provide access to information for citizens and to make political party funding transparent. The Director of the Partnership and Development Centre of the National Probity and Anti-Corruption Institute, Yassir Chokairi, described the role of his institution in this context, which is to set up a corruption monitoring centre, bring Moroccan legislation into line with the best international anti-corruption standards, propose a national strategy, organise a public awareness-raising campaign, detect and punish acts of corruption and establish international partnerships.

However, according to Ahmed Bernoussi, Secretary General of the NGO, Transparency Morocco, the National Anti-Corruption Institute still lacked the appropriate human and international resources, particularly to negotiate international partnerships. He also criticised the judicial system, which in his opinion, prevented acts of corruption from being punished in good time in Morocco, and the corrupt practices observed at local and regional elections, which were often imposed by the national parties, meaning that there was a need to protect local elected representatives from them. In this connection, Mohamed Boudra and his colleague Mohamed Daoudi, Vice-Chair of the Moroccan Association of Chairs of Municipal Councils, emphasised the need to reinforce the status of local elected representatives, who were subject to very complex monitoring and supervisory processes on the part of government institutions. The association had also set up a “Citizens’ Municipality” label, which was intended to promote transparency, participation, equal access to services, efficiency, solidarity and innovation at local governance level.

Lastly, Abdallah Ghazi, Vice-Chair of the Moroccan Association of Chairs of Prefectoral and Provincial Councils, welcomed the co-operation based on the positive outcome of the joint experiences of the Congress and Moroccan local and regional authorities, whose commitment to combat corruption formed part of an ongoing drive for social and geographic fairness.  However, he also highlighted the exigencies inherent in the work of local elected representatives, who were expected to elicit both citizens’ and international institutions’ trust, strike a balance between legislative and societal norms and promote digitisation, whereas a large part of the rural population was excluded from it.

This webinar is part of the South-Med Partnership programme adopted by the Congress in 2017, the purpose of which is to support territorial reforms and strengthen decentralised governance in beneficiary neighbouring countries. This programme contributes to implementing the local and regional dimension of the Council of Europe policy towards neighbouring regions, in particular the Neighbourhood Partnerships with Morocco and with Tunisia (2018-2021). The activities organised in this framework benefit from financial support by Liechtenstein, Norway and Spain.