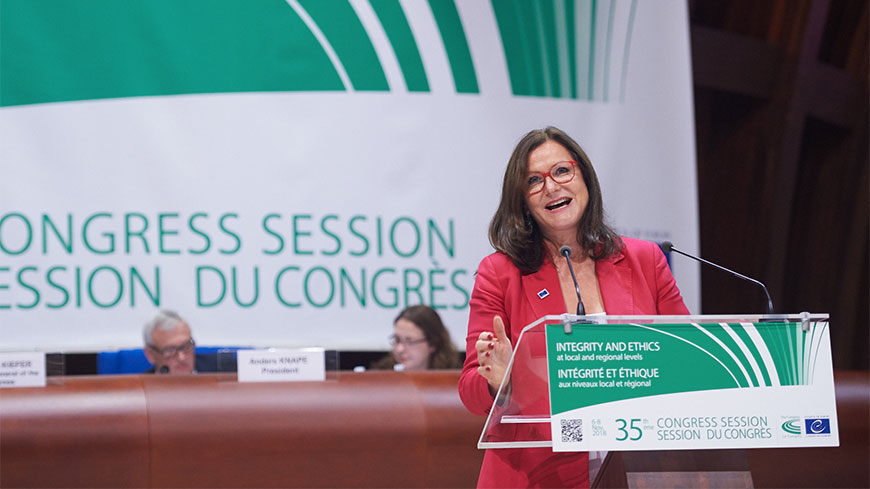 Taking stock of her two-year term at the helm of the Congress of Local and Regional Authorities, outgoing president Gudrun MOSLER-TÖRNSTRÖM spoke of the high quality of the work and  discussions that had helped to convey the Congress’s political message.

“The policy we have been following for ten years is to focus on our competences, in particular through the monitoring of the European Charter of Local Self-Government, the observation of local and regional elections and co-operation programmes,” said the President. “It is this pragmatic policy that allows the Congress to contribute effectively to the local and regional dimension of the Council of Europe’s activities,” she added, pointing to the role of national associations of local and regional authorities.

“On a more personal note, as the first woman to be elected President of this Assembly, I have been keen to raise the profile of gender equality and the place of women in politics, in our communities and in international organisations,” declared Ms MOSLER-TÖRNSTRÖM. She underlined how, for the first time also in the history of the Council of Europe, between May and November 2018, the chairmanship of its three political entities – the Committee of Ministers, the Parliamentary Assembly and the Congress - had been held by women.

Calling on Congress members to continue the fight for gender equality, Ms MOSLER-TÖRNSTRÖM expressed the hope that in future, it would become the norm to have a regular rotation between genders for the post of Congress President. “This is the message I want to leave you at the opening of this session. The Congress has been a true pioneer with regard to parity, it is now up to us to confirm this political will and to put it into practice,” she concluded.