Morocco and Tunisia: Webinars on "Promoting Ethics and Preventing Corruption at Local and Regional Levels" 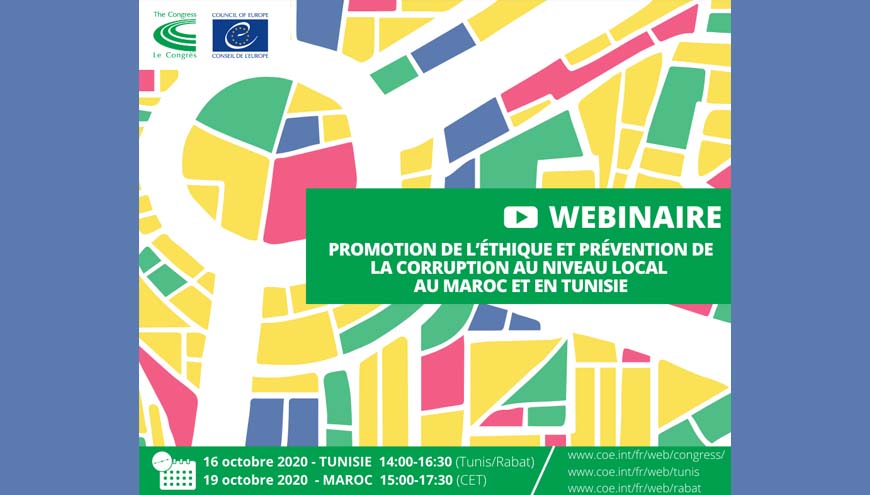 Two webinars on "Promoting ethics and preventing corruption at local and regional level" in Tunisia and Morocco were held on 16 and 19 October 2020 respectively. Organised as part of the Congress' South-Med Partnership framework, the webinars brought together Congress members, representatives of national associations of local and regional authorities and national authorities of Morocco and Tunisia, and NGO representatives working on these issues.

In order to prevent risks and maintain trust in local and regional authorities, the webinars provided an opportunity to examine challenges identified in the fight against corruption in all its forms . Participants discussed these issues in light of six thematic reports adopted by the Congress and published in the "Public Ethics" series, available in several languages including Arabic. These practical guides aim to help European, Moroccan and Tunisian locally elected representatives to apply the principles of good governance on a daily basis: accountability, transparency, integrity, respect and non-discrimination, merit and impartiality.

These exchanges took place in the context of reforms and projects underway in the two countries. In 2016, Morocco launched the "National Strategy for the Fight against Corruption" (SNLCC) based on five axes: governance, prevention, repression, communication/awareness raising and training/education. In Tunisia, the current decentralisation reform is based on the legal framework defined in the 2014 Constitution and reinforced with the adoption of the Local Government Code in 2018, which notably enshrines the right of citizens to access information.

Moreover, since 2019, Morocco and Tunisia have been granted the status of "Partner for local democracy" with which the Congress and their delegations may, in this capacity, participate in Congress sessions and meetings of its committees (monitoring, governance and current affairs).

The webinars are part of the South-Med Partnership programme adopted by the Congress in 2017, the purpose of which is to support territorial reforms and strengthen decentralised governance in beneficiary neighbouring countries. This programme contributes to implementing the local and regional dimension of the Council of Europe policy towards neighbouring regions, in particular the Neighbourhood Partnerships with Morocco and with Tunisia (2018-2021). The activities organised in this framework benefit from financial support by Liechtenstein, Norway and Spain.

The webinars are open to the public.

16 October 2020 - Webinar: "Promoting ethics and preventing corruption at the local level in Tunisia"

19 October 2020 - Webinar: "Promoting ethics and preventing corruption at the local level in Morocco"