Jean-Claude Frécon: “Local authorities can and must promote education about democratic citizenship and religious practices” 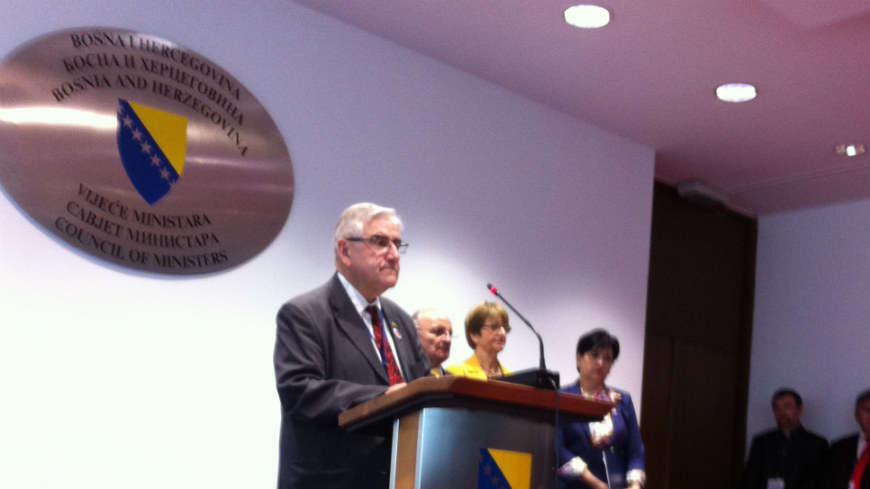 At the occasion of the annual Council of Europe Exchange on the Religious Dimension of Intercultural Dialogue held in Sarajevo, from 2 to 3 November 2015, as part of Bosnia and Herzegovina’s chairmanship of the Committee of Ministers, Jean-Claude Frécon drew attention to the toolkit developed by the Congress for local elected representatives, which will include information about the Congress strategy for combating radicalisation. He also referred to the Parliamentary Assembly’s recent recommendation on freedom of religion and the proposal that a permanent platform be set up around the religious dimension of intercultural dialogue in order to consolidate the existing relations with the current partners. “I can assure you that the Congress will support the proposal and will take part in any such platform,” he concluded. The event was opened by the Minister for Human Rights and Refugees of Bosnia and Herzegovina, Semiha Borovac, with the President of the Jewish Community of Bosnia and Herzegovina and President of the Interreligious Council, Jakob Finci, the President of the Parliamentary Assembly of the Council of Europe, Anne Brasseur, and the Minister of the Interior of Austria, Johanna Mikl-Leitner.