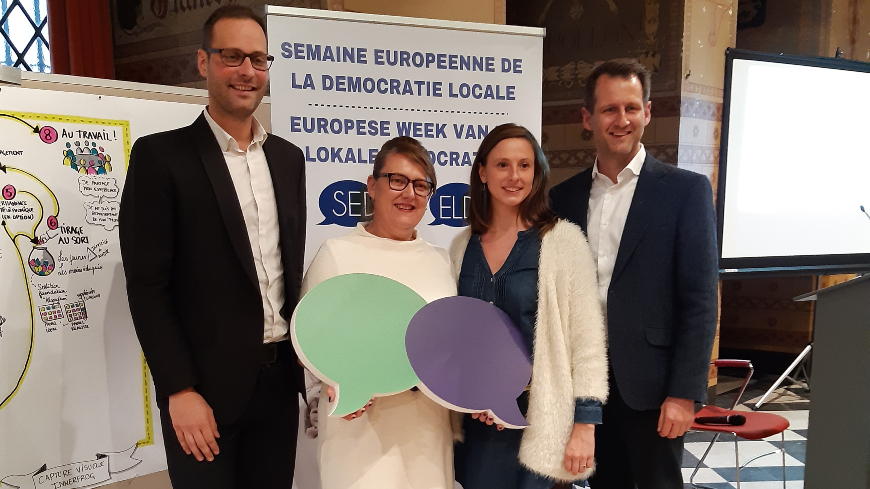 “To overcome the crisis of confidence in democratic institutions, it is essential for citizens to be able to participate in decision-making at the local level,” stated Bryony Rudkin (United Kingdom, SOC/G/PD) at the closing conference of the European Local Democracy Week (ELDW) organised by Brulocalis (Association of the City and the Municipalities of the Brussels-Capital Region) on 6 December 2019 in Brussels, Belgium. “The ELDW aims precisely to strengthen participation and put in place effective mechanisms for citizen engagement,” she added.

Mrs. Rudkin, Congress thematic spokesperson, presented the modalities of the ELDW and the assessment of the 2019-2020 edition, placed under the theme “Local democracy: building trust”. 55 municipalities from 18 countries organised more than 220 activities. This result shows that the ELDW is an effective means of reconnecting citizens, especially young people, with local institutions, but also of experimenting new forms of direct participation, new participatory structures and new innovative projects.

Mrs. Rudkin highlighted examples of initiatives that have improved the inclusiveness of the cities where they have been implemented, such as the Council of Foreign Residents in Strasbourg (France), the Youth Council in Vilnius (Lithuania), support for senior citizens in accessing public services via smartphones in Büyükçekmece (Turkey), raising awareness among young people about the functioning of local institutions in Chesterfield (United Kingdom) and the establishment of a youth budget in Valongo (Portugal).

“Involving citizens allows local elected representatives to design better policies and improve the services provided to their community. The Congress is persuaded that this practice, combined with the implementation of transparent and accountable local governments, can restore public trust and revitalise our democracy,” the spokesperson concluded.