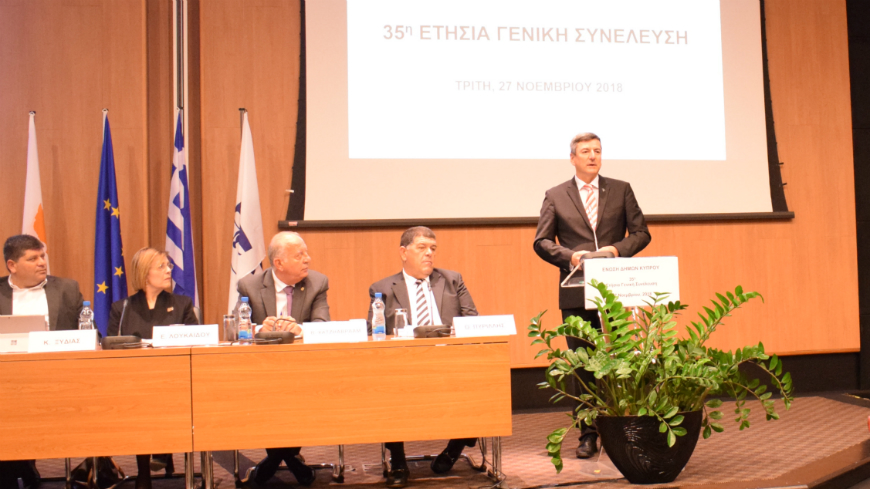 “The Congress welcomes the strong commitment of President Nikos Anastasiadis and of Konstantinos Petridis, Minister of the Interior, to make 2019 the year of local self-government reform in Cyprus,” Andreas KIEFER, Congress Secretary General, said in his speech at the Annual General Meeting of the Union of Cyprus Municipalities, held in Nicosia (Cyprus) on 27 November 2018. In this context, he referred to the latest Congress monitoring report on the situation of local democracy in Cyprus of 2016 and invited the national authorities to discuss the follow-up given to the Congress's recommendations and to make best use of them in the final phase of drafting the legislation governing the reform. “The Congress stands ready to enter in this political dialogue”, he said.

“National associations of local and regional authorities are key partners with whom the Congress is in constant dialogue,” Andreas KIEFER underlined and confirmed its support for the Union of Cypriot Municipalities in the reform process. National associations contribute to setting the Congress's priorities and are consulted in selecting the Congress members in their countries. They also relay the Congress's messages in the field, rolling out Congress activities the member States and can act as “whistle-blowers” reporting on situations that may raise issues of compliance with the European Charter of Local Self-Government.

“The Charter is the Council of Europe’s main legal instrument for strengthening local democracy across Europe. It enshrines fundamental principles for the good functioning of local government, including the principle of proper consultation by national governments,” he said, stressing that the national associations’ vital role in fostering dialogue is a must for good democratic governance.

On 8 November 2018 the Congress adopted “Guidelines on the consultation of local authorities by higher levels of government” on the basis of a report drawn up by Anders KNAPE (Sweden, EPP/CCE), Congress Rapporteur and newly elected President of the Congress.