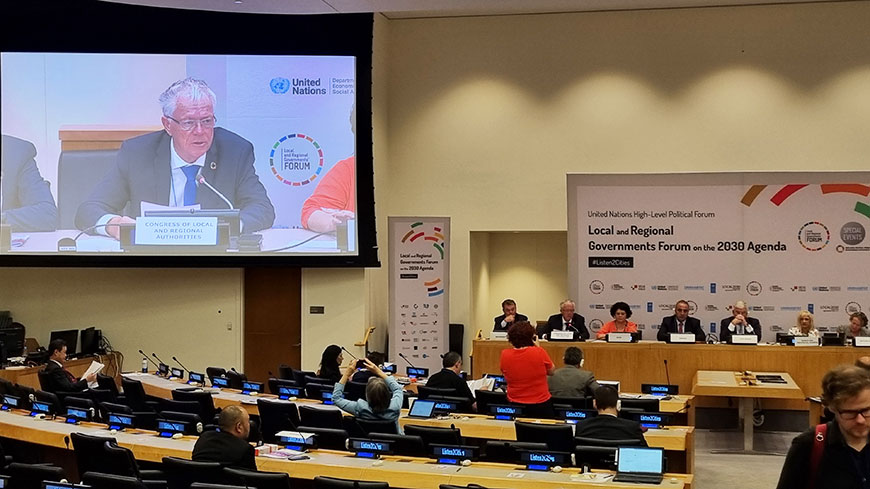 “In the Congress, we advocate for engaging local and regional authorities in the design and implementation of national action plans on SDGs and for their contribution to Voluntary National Reviews,” stated Congress President Leendert Verbeek during the session devoted to the localization of the SDGs, at the 5th Forum of Local and Regional Governments held on 12 July 2022, in New York.

Recalling that more than two-thirds of the SDG targets can only be implemented at local or regional level, he called for local and regional authorities to be involved in structured and regular consultation with central governments and parliaments.

The Congress is currently preparing an Additional Protocol to the European Charter of Local Self-Government which, for the moment, does not explicitly mention the right to a sustainable environment. " What we aim at is a “green reading” of the Charter, so to say an interpretation of its provisions from the angle of environmental protection, as well as the strengthening of the position of local and regional authorities – vis-à-vis State authorities – in decision-making on environmental matters,” he said.

This event was preceded by a visit by the President of the Congress to Washington, accompanied by the Secretary General of the Congress, Andreas Kiefer, on July 11, during which he held meetings with representatives of the United States Conference of Mayors, the German Marshall Funds of the United States and of the National Democratic Institute. Activities to support rebuilding a democratic Ukraine were in the center of the discussions with the President of the German Marshall Fund of the United States, Heather A. Convey, and the Director of GMF, Steven Bosacker.