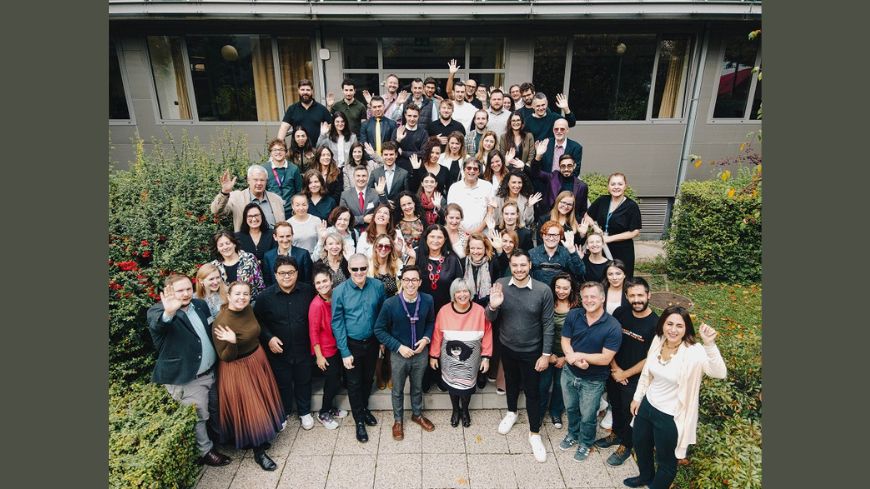 These are just some of the subjects discussed during the youth statutory meetings held in the European Youth Centre in Budapest from 10 to 12 October 2022.

Buoyed by the conclusions of the high-level reflection group of the Council of Europe, which wholeheartedly agreed that “building sustainable democracies requires the sustained involvement of youth”, the Joint Council on Youth worked through a full agenda and took important decisions for the future.

After only eight months’ work by the drafting group, the Joint Council was able to adopt the draft Committee of Ministers recommendation on Roma[1] youth participation.  The recommendation addresses the systematic discrimination faced by Roma young people in their access to social, economic, cultural, political, and civil rights, as well as the added forms of discrimination faced by Roma young women, LGBTI+, people with disabilities, migrants or Muslims.  This draft text will now be submitted to the Committee of Ministers for examination and adoption.

Following the successful Youth Action Week (27 June to 1July), the CMJ set up a co-managed group to co-ordinate the follow-up of the Democracy here | Democracy now youth campaign. A project will be drawn up for 2023 to enhance implementation of the campaign at national and local levels.

The conclusions of the spring Human Rights Forum (April 2022, Turin) and of the review of the Charter on Education Citizenship and Human Rights Education will be analysed during a consultative meeting to be held in early 2023.  The meeting will serve to prioritise further action in this field.

Finally, the Joint Council on Youth agreed to invite the Programming Committee on Youth to consider its request to grant 100 000 € from the voluntary contribution from Germany to a special European Youth Foundation call for activities for and with Ukrainian young people and organisations, both in that country and for those who have fled the war.

The youth sector’s agenda for the next few months has been consolidated following these important decisions from the Joint Council on Youth and the greatly appreciated voluntary contributions from Germany and France will be instrumental in the implementation of the youth sector’s programme of activities in the future.

[1] The term ‘Roma and Travellers’ is used at the Council of Europe to encompass the wide diversity of the groups covered by the work of the Council of Europe in this field: on the one hand, a) Roma, Sinti / Manush, Calé, Kaale, Romanichals, Boyash / Rudari; b) Balkan Egyptians (Egyptians and Ashkali); c) Eastern groups (Dom, Lom and Abdal); and, on the other hand, groups such as Travellers, Yenish, and the populations designated under the administrative term ‘“Gens du voyage’”, as well as persons who identify themselves as Gypsies. The present is an explanatory footnote, not a definition of Roma and/or Travellers.