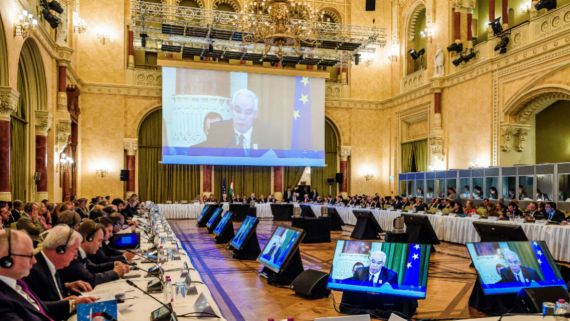 Following its creation, the Enlarged Partial Agreement on Sport (EPAS) has now organised seven Council of Europe Conferences of Ministers responsible for Sport. During these high-level conferences, Ministers around the table discuss issues such as the autonomy of sport, match-fixing, gender equality in sport, and corruption in the governance of sport, allowing them to propose concrete actions on these issues at pan-European level.

The most recent Conference of Ministers responsible for sport was hosted by Greece. Due to Covid-19 pandemic, the event took place online and included a few shorter events spread out from 5 November 2020 to 11 February 2021.

EPAS also organises more informal ministerial network events, and these are held on an ad hoc basis, generally on the occasion of an international sports event taking place in Europe where Ministers of Sport are already in attendance.  Most recently, EPAS organised such events in Sochi (2014), Baku (2015) and Moscow (2018).

EPAS organised this 15th Ministerial Conference in conjunction with the Ministry of Education, Science, Culture and Sport of Georgia. The conference was held on 16 October and focused on two main themes: Protecting human rights in Sport and Fighting corruption in sport. Ministers of Sport representing states parties to the European Cultural Convention, EPAS members and non-member states having Observer status, attended the conference.

Report to the Committee of Ministers assessing the progress of the measures implemented following the adoption of Resolution No. 1

Report to the Committee of Ministers assessing the progress of the measures implemented following the adoption of Resolution No. 2

EPAS organised this 14th Ministerial Conference in conjunction with the Ministry of Human Capacities of Hungary. The conference was held on 29 November at the famous Pesti Vigadó in Budapest and focused on the fights against doping, match-fixing and corruption in sport. Ministers of Sport representing states parties to the European Cultural Convention, EPAS members and non-member states having Observer status, attended the conference.

This 13th conference was hosted by Mr Ueli Maurer, Federal Councillor for the Department of Defence,Civil Protection and Sport (DDPS) on behalf of the Swiss Government, and was held in the mountain village of Magglingen on the sports campus of the Federal Office of Sport (OFSPO). The main theme of the conference was the “Risk of Corruption in the Governance of Sport”.

The conference also served as a special occasion for the Secretary General to open the Convention on the manipulation of sports competitions (CETS 215) for signature, holding a signing ceremony for the 15 states which took the opportunity to be the first signatories of this new convention.

The 12th Council of Europe Conference of Ministers responsible for Sport took place in Belgrade (at the Belexpo Center) on 15 March 2012. The main theme of the conference focused on “Promotion of the integrity of sport against manipulation of results”, and was the trigger for EPAS to start the negotiation process for the drafting of the Convention on the manipulation of sports competitions (CETS 215).

The 11th Council of Europe Conference of Ministers responsible for Sport was held in Athens on 11 and 12 December 2008, at the invitation of the Greek Government.

The main theme of the Conference was "Ethics and Autonomy in Sport". The Conference also looked at current political issues, namely European co-operation in the fight against doping and European representation in the World Anti-Doping Agency (WADA) bodies. At the end of the Conference, the Ministers adopted three draft resolutions (on ethics in sport, autonomy in sport and pan-European co-operation in sport) relating to the priorities expressed by EPAS member states in consultation with the sport movement. The international organisations and the sport movement expressed their wish to continue their very close co-operation with EPAS.

Final report of the 11th Conference of Ministers responsible for Sport

Ministers responsible for sport met in Russia, on the occasion of the FIFA World Cup, to reassert their strong commitment to the Macolin Convention in order to maintain the political momentum. Four years after the adoption of the Macolin Convention, the situation is now critical. The convention is close to entering into force, with only two more ratifications needed worldwide. Meanwhile, criminal networks are taking advantage of the absence of an international legal framework in order to continue corrupting sports competitions.

This informal networking event, co-organised by EPAS and the Russian Ministry of Sport, gave Ministers from various European countries, South America and Asia, the opportunity to acquaint themselves with the challenges facing states in the ratification process, and to suggest which political initiatives and techniques would help to overcome these obstacles.

The event was opened and chaired by Mr Pavel Kolobkov, Minister of Sport of the Russian Federation.

“How to promote the social sustainability of major sports events”

The event was organised by the Council of Europe’s Enlarged Partial Agreement on Sport (EPAS), in co-operation with the Ministry of Youth and Sport of the Republic of Azerbaijan.

It addressed two main issues: how to promote the social sustainability of major sports events and Pan-European co-operation on sports events.

To strengthen dialogue and co-operation on sports policies at pan-European level, the Governing Board of EPAS noted that it may take the opportunity to organise more flexible, shorter meetings for its Ministers, e.g. in conjunction with major sports or other political events, where appropriate. In agreement with the Azerbaijan authorities, it was proposed to hold a short informal meeting just after the opening of the European Games, and to use this for an exchange of views between Ministers on co-operation regarding major sports events.

This event was designed only for those Ministers and officials who were already accredited for the European Games.

Executive Report of the Informal Event

“How to promote a positive legacy of major sports events”

In co-operation with the Ministry of Sport, Tourism and Youth Policy of the Russian Federation, the EPAS organised a short, informal meeting, prior to the opening of the Sochi Winter Olympic Games. The aim was for the Ministers of Sport to hold an informal exchange of views on pan-European co-operation regarding major sports events and on how such events can create a positive legacy.

Executive Report of the Informal Event