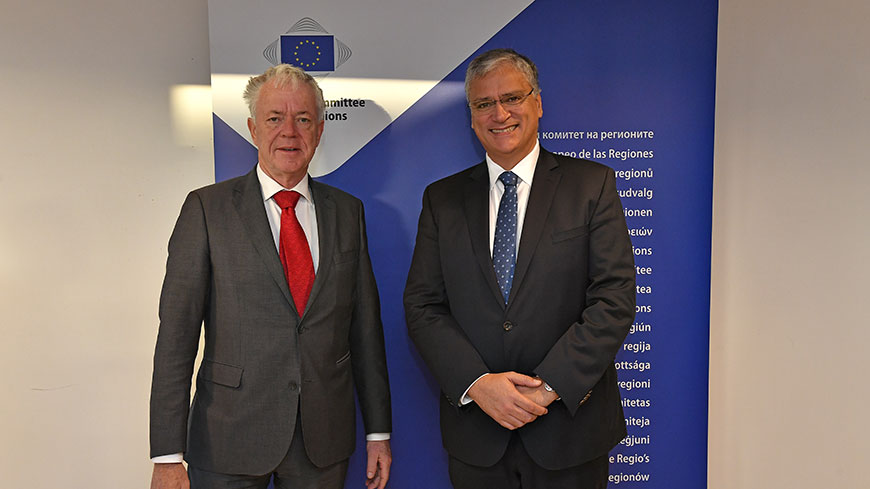 War, the pandemic, the climate crisis, and economic and financial crises are undermining local self-government across Europe

The Presidents of the European Committee of the Regions and of the Congress of Local and Regional Authorities of the Council of Europe have warned that local and regional governments are struggling to cope with the series of crises that have rocked the continent since 2020.

The statements came at a meeting in Brussels of the political leadership of the European Committee of the Regions, the voice of subnational governments in the 27-member European Union, and of the Congress of Local and Regional Authorities of the Council of Europe, which has 46 member states and the mandate to strengthen local and regional democracy and to assess the application of the European Charter of Local Self-Government.

Vasco Alves Cordeiro, President of the European Committee of the Regions, said: "Advancing cooperation and unity between our two institutions is even more important in the context of growing threats to European democracy, human rights, or the rule of law. Russia's war against Ukraine but also long existing dangers like disinformation, populism and hate speech call on all local and regional authorities to come forward and defend democracy and solidarity."

"Our cities and regions are under increasing pressure from multiple crises which are having a significant and lasting impact on local and regional governance. Cooperation is essential to increase the resilience of our communities," added Leendert Verbeek, President of the Congress, referring to the challenges faced by local and regional authorities including health, environmental, migratory, economic and financial crises and armed conflicts – the war in Ukraine in particular.

The Congress President stressed the importance of addressing these challenges against the background of re-centralisation, lack of financial means, and increasing attacks on local and regional elected representatives. He warned that “this ‘perfect storm’ undermines the foundations of genuine local self-government and makes the work of the Congress even more essential, through its regular monitoring of the European Charter of Local Self-Government and the promotion of human rights at the grassroots level".

Both Presidents warned of the dangers of hate speech and disinformation and considered critical aspects of local democracy in Europe, including the efforts to promote deliberative democracy, with the Committee of the Regions' President presenting the findings of its 2022 Annual Report on the State of Regions and Cities presented in his address last October and the Charter on Youth and Democracy to be launched this Thursday.

President Cordeiro emphasised the potential benefits that could emerge from the Conference on the Future of Europe, that ended in May 2022 and whose conclusions are helping to shape the agenda and functioning of the EU.

President Verbeek outlined findings from their monitoring of the state of local and regional democracy, and stressed the need for joint efforts in responding to the crises and in defending the role and position of local and regional authorities vis-a-vis national governments and European institutions. Harald Sonderegger, President of the Congress Chamber of Regions, and Bernd Vöhringer, President of the Chamber of Local Authorities presented the work on human rights at local and regional level, and in particular the “green reading” of the European Charter of Local Self-Government, localisation of SDGs and deliberative democracy.

The two institutions discussed the efforts to support cities and regions in Ukraine through the Alliance of Cities and Regions for the Reconstruction of Ukraine, building on, for example, the Cities4Cities initiative by the Congress, which is an institutional partner of the Alliance.