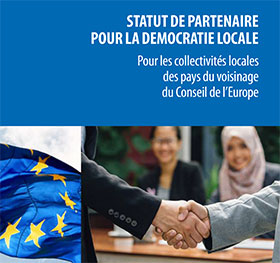 Established by Resolution 376 (2014), the Partner for Local Democracy status of the Congress of Local and Regional Authorities enables elected representatives of local authorities of countries in the Council of Europe’s neighbourhood to participate, within the Congress, in strengthening local and regional democracy. The introduction of democracy at the level closest to the citizen is a fundamental factor for the development and consolidation of genuine pluralist democracy.

The adoption of this status follows on from the new impetus given by the Congress to its relations with the countries in the Council of Europe’s neighbourhood, especially those on the southern shore of the Mediterranean, under the Organisation’s neighbourhood partnerships. Obtaining this status must be requested under a procedure established by Rule 72 of the Congress’s Rules and Procedures.

Members of delegations from countries granted this status can take part in the sessions of the Congress and the meetings of its committees (Monitoring Committee, Current Affairs Committee, Governance Committee) throughout the year and can express their opinions and table proposals in order to contribute to debates.

The Partner for Local Democracy status ties in with the Council of Europe’s neighbourhood policy. Designed for partners in North Africa, the Middle East and Central Asia, the Neighbourhood Policy pursues the following three objectives: