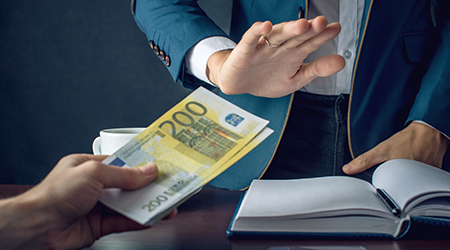 Corruption poses a continuous threat to the essence and core values of societies and institutions. It undermines justice and the equal treatment of citizens, and endangers good governance and the stability of democratic institutions. The fight against corruption is carried out through the Group of States against Corruption (GRECO) which assists member states in this area.

GRECO takes a multidisciplinary approach. It monitors observance of the Council of Europe’s anti-corruption legal texts, including the Twenty Guiding Principles for the Fight against Corruption, the Criminal Law Convention on Corruption and its additional protocol and the recommendation on common rules against corruption in the funding of political parties and electoral campaigns, along with other legal agreements on whistle-blowers, access to official documents and lobbying.

GRECO’s monitoring combines a dynamic process of mutual evaluation and peer pressure, resulting in countryspecific evaluation reports which include a detailed analysis and tailor-made recommendations drawn up following an on-site visit and validated by the GRECO plenary. Subsequent impact assessments (“compliance procedures”) also validated by the plenary, serve to verify achievements and to push for further progress towards compliance with the recommendations. A high profile is maintained in external relations to secure additional support, coordination and synergy, notably with the United Nations, the OECD, OSCE/ODHIR, International IDEA, and the European Union.

Many NGOs play a role in the fight against corruption. A list of those working with the Council of Europe is available here.