Serbia has benefited from the Council of Europe co-operation programmes since 2002. In this respect, the Council of Europe has been providing support to Serbia to advance its reform agenda, ensuring compliance with Council of Europe standards and advancing the European Union accession process. In close co-operation with the Serbian authorities, support has been provided to the reforms in the following key areas: rule of law, judiciary, human and minority rights, freedom of expression and freedom of the media, human resources management in local self-government as well as preventing money laundering and terrorist financing. The Council of Europe Office in Belgrade ensures the necessary co-ordination between headquarters and national stakeholders, as well with international partners present in the field.

The co-operation with Serbia was further streamlined through the European Union/Council of Europe Horizontal Facility for the Western Balkans and Turkey, a flagship instrument launched in May 2016. The second phase of the programme is currently under way, within which seven actions are being implemented in Serbia. These actions are contributing to reforms in the penitentiary system, reinforced judicial practice in line with the requirements of the European Convention on Human Rights, the enhanced capacity of judges to counter the risk of undue influence and the strengthened implementation of the recommendations of the Council of Europe Convention on Action against Trafficking in Human Beings, as well as improving the application of European standards in the field of freedom of expression and freedom of the media. Accordingly, the capacity of national and local stakeholders has been enhanced to better address issues relating to anti-discrimination, while schools, local communities and relevant education institutions have been supported in fighting discrimination in education.

Support is also provided to Serbia through the European Union/Council of Europe Joint Programme “Human resources management in local self-governments – Phase 2”, as well as through the project “Preventing money laundering and terrorist financing in Serbia” with the assistance of the Swedish International Development Co-operation Agency.

Serbia also plays an active role in European Union/Council of Europe joint programmes and actions in the region. Under the umbrella of the Horizontal Facility it benefits from actions that aim to: enhance penitentiary capacities in addressing radicalisation in prisons, improve the quality and sustainability of justice through the Council of Europe flagship initiative based on CEPEJ methodology “Dashboard – Western Balkans”, strengthen human rights education for legal professionals (HELP), improve legal certainty, fight economic crime, enable the promotion of diversity and equality and strengthen freedom of expression and freedom of the media. Furthermore, Serbia also benefits from the iPROCEEDS 2 programme which reinforces the capacity of the authorities to search, seize and confiscate cybercrime proceeds, prevent online money laundering and secure internet evidence and from the ROMACTED programme that supports the promotion of good governance and Roma empowerment at a local level. 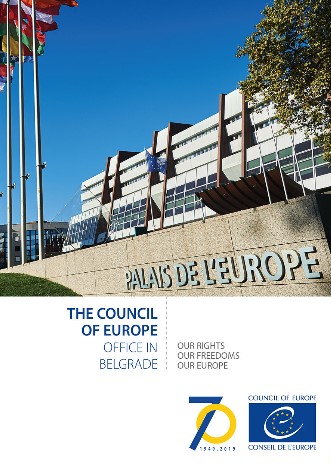 Council of Europe Office in Belgrade

Leaflet on the Council of Europe Office in Belgrade

Horizontal Facility for the Western Balkans and Turkey 2019-2022