Since Azerbaijan’s accession to the Council of Europe in 2001, its main objective of co-operation activities has been to support the country in honouring its statutory obligation and specific commitments as a Council of Europe member State, in order to improve democracy, human rights and the rule of law in the country. The Council of Europe Office in Baku ensures the necessary co-ordination between headquarters and national stakeholders, as well as with international partners present in the field.

The Council of Europe Action Plan for Azerbaijan 2022-2025 was adopted by the Committee of Ministers on 16 February 2022 and officially launched in Baku on 5 April 2022 by Marija Pejčinović Burić, Council of Europe Secretary General, and Fikrat Mammadov, Minister of Justice of the Republic of Azerbaijan. The Action Plan has been prepared in close consultation with the Azerbaijani authorities and is a strategic co-operation framework to support key national reforms and ultimately bring the country’s legislative and regulatory frameworks, institutions and practice further in line with European standards. In meeting its objectives, the Action Plan contributes to the implementation of the UN 2030 Agenda for Sustainable Development.

Its priorities take into account relevant judgments of the European Court of Human Rights, decisions, resolutions, recommendations, and opinions of the Council of Europe institutions, monitoring mechanisms and expert advisory bodies. They also reflect Azerbaijani’s reform priorities and needs. Additionally, the Action Plan builds upon the results and achievements of the previous Action Plan for 2018-2021.

The new Action Plan aims at strengthening democratic security in Azerbaijan by developing and effectively implementing policies and legislation in a number of areas where the Council of Europe provides added value: reforms to improve the implementation of the ECtHR case law and judgements at the national level, improve the criminal justice system and ensure fundamental freedoms, strengthen the capacities of the media, enhance data protection, promote gender equality and combat violence against women and domestic violence, promote children’s’ rights, ensure social rights, further increase the effectiveness, accountability and transparency of the judiciary, step up the fight against corruption and money laundering, combat cybercrime, further support reform of the prison system, conduct electoral reform, enhance dialogue between the national authorities and civil society organisations, promote human rights education for young people and develop a democratic and inclusive climate in schools. The parties have also identified new areas for co-operation, namely aligning national anti-discrimination legislation and practice with the Council of Europe standards, ensuring freedom of expression, contributing to environmental protection, artificial intelligence, combating drug abuse and illicit trafficking and combating trafficking in human beings in line with national legislation and international obligation of Azerbaijan.

The total budget is approximately €9.6 million. Projects in the Action Plan are funded from multiple sources and co-ordinated with the international partners present in Azerbaijan. Funding is provided from the Council of Europe’s ordinary budget, as well as voluntary contributions, including the European Union (notably through the European Union/Council of Europe Partnership for Good Governance (PGG)). PGG II is geared towards enhancing judicial system reform, countering discrimination and combatting corruption, money laundering and terrorism financing.

The Action Plan is implemented through the Council of Europe Office in Baku; programming and resource mobilisation are under the responsibility of the Directorate of Programme Co-ordination, and the substance of projects comes from our colleagues in Directorate General Human Rights and Rule of Law, Directorate General Democracy, PACE and Congress. 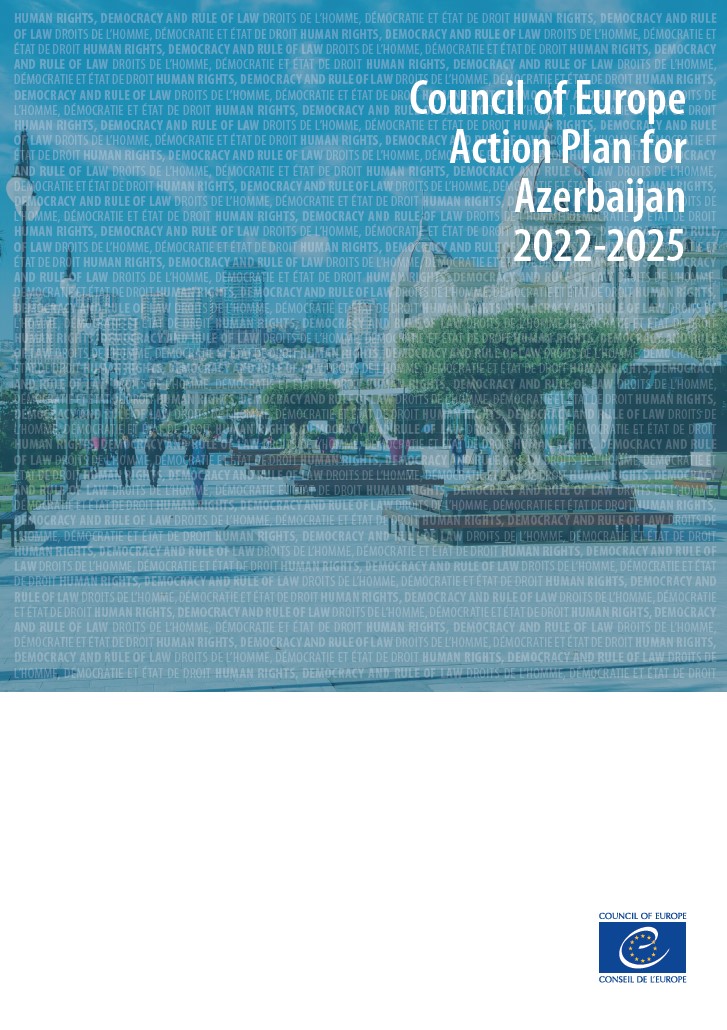 Council of Europe Office in Baku