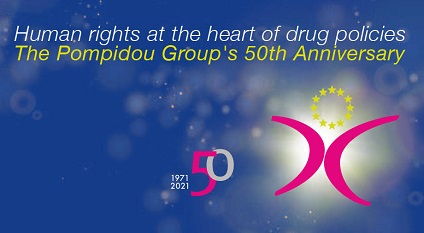 In 2021, the Pompidou Group celebrated its 50th anniversary with an ambitious agenda to put human rights at the heart of drug policy.

For 50 years now, the Pompidou Group has been helping policy makers, professionals and researchers to share information and experience regarding drug use and drug trafficking.

For us, the anniversary year was an opportunity to continue our successful path into the future together with our member states and partners.

The President of the Pompidou Group explains the anniversary programme in his statement from 4 January 2021.

Foundation of the Pompidou Group 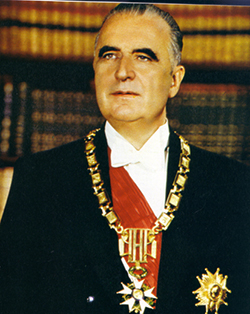 The Co-operation Group to Combat Drug Abuse and Illicit Trafficking in Drugs was formed as an intergovernmental body in 1971 at the initiative of the late French President Georges Pompidou.

Following President Pompidou's letter addressed to the Prime Ministers of Belgium, Germany, Italy, Luxembourg, the Netherlands and the United Kingdom, experts met to prepare the first ministerial meetings in Paris on 4 November 1971 and in London on 17 February 1972.

Until 1979, the group operated without a formal status supported by the countries holding its presidency: France from 1971 to 1977 and Sweden from 1977 to 1979. The group developed as a sui generis entity throughout the 1970s, and three other countries (Denmark, Ireland and Sweden) joined it during that decade.

Integration of the Pompidou Group into the Council of Europe 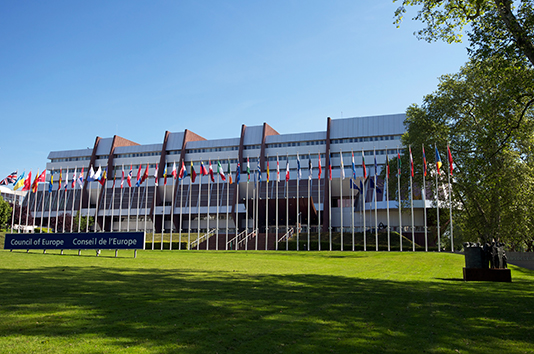 The representatives of eleven signatory states – Belgium, Denmark, France, the Federal Republic of Germany, Ireland, Italy, Luxembourg, the Netherlands, Sweden, Turkey and the United Kingdom – agreed that the objectives of the Pompidou Group should be :

to carry out a multidisciplinary study of the problems of drug addiction and illicit drug trafficking;
to maintain within the framework of this partial agreement the working methods used until now by the group.

Link to the founding resolutions 1980. 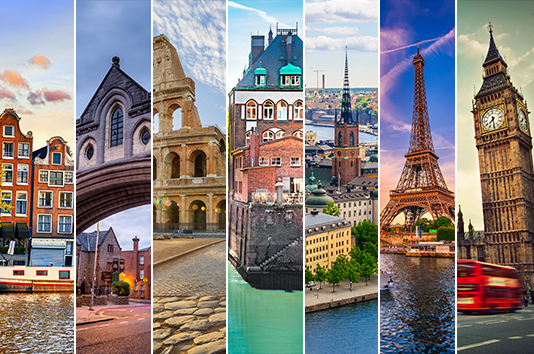 With the establishment of its group of experts in drug epidemiology in 1982, the Pompidou Group was a pioneer in the development of research and monitoring of drug problems in Europe.

The Pompidou Group followed this up with a comparative epidemiological study of drug abuse indicators in seven European cities: Amsterdam, Dublin, Hamburg, London, Paris, Rome and Stockholm, the results of which were finalised in the autumn of 1986 and published in a report. The aim of this comparative study was to clarify the drug abuse indicators used in the different cities, to describe more clearly the extent of the problem, taking into account the different cultural and political contexts and to improve the understanding and interpretation of these data within the Pompidou Group.

Enlargement to the East 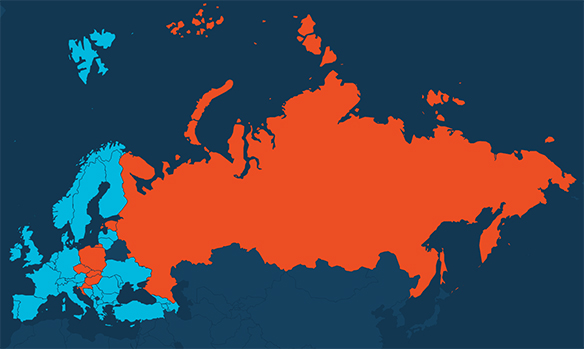 By the end of the 1990s, the Pompidou Group comprised 26 member states.

Creation of the Airports Group 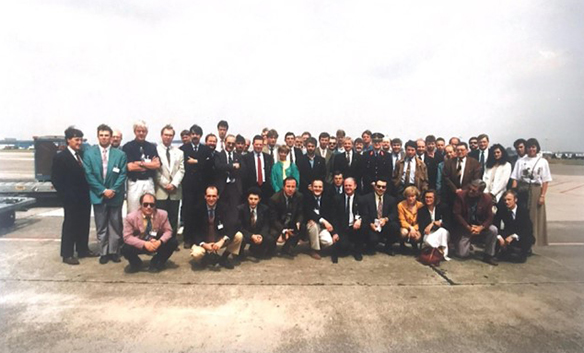 In order to achieve more effective control of drug trafficking in general aviation, in 1995 the Pompidou Group set up the Airports Group, which regularly provides member states with the latest information on the modus operandi of drug traffickers in civil aviation and on the technical measures needed to neutralise them.

The launch of the 1st European Drug Prevention Prize 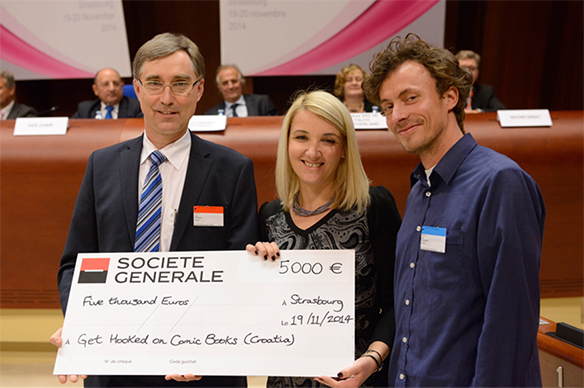 The European Drug Prevention Prize is awarded to outstanding drug prevention projects that have proved successful in involving young people in their design, implementation and evaluation. It aims to increase awareness of the importance of active youth participation in reducing drug-related harm and creating healthier citizens and communities across Europe.

The three winning projects of the last competition in 2018 were Accept me in your Village (Bulgaria), Workshop for Life (Greece) and Responsible Youth (Turkey). In recognition of their work, these projects were awarded a trophy, a diploma and prize money during the 17th Ministerial Conference of the Pompidou Group in Stavanger, Norway.

The creation of MedNET: Mediterranean network for co-operation on drugs and addictions 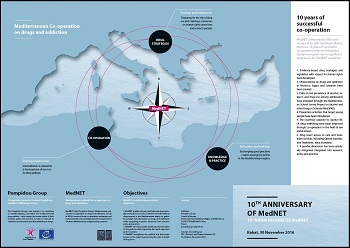 MedNET promotes co-operation, exchange and mutual transfer of knowledge between countries from both sides of the Mediterranean, while respecting human rights and gender equality. Among MedNET’s achievements:

EXASS Net is a European network for professionals responding to drug problems. This unique format was among the first to share experiences and provide assistance for intersectoral co-operation.

The initiative to create such a network came from the 2006 Finnish EU presidency, which identified the need for enhanced co-operation among various actors in the law-enforcement, health and social sectors, in order to better tackle drug-related problems.

Following the recommendations from a major conference entitled “Moving Forward Together” held in Turku in September 2006, the Finnish EU presidency suggested setting up a European network for multi-agency partnerships tackling drug problems at front-line level. 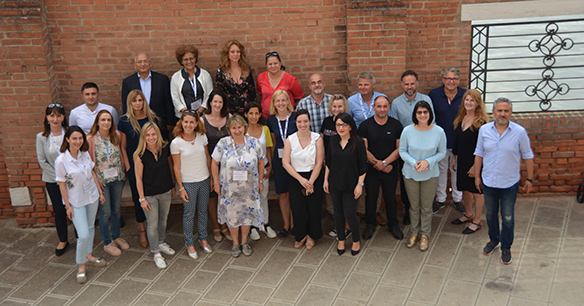 The thematic annual courses link policy, research and practice in support of multidisciplinary drug policy management. In this way, the Executive Training courses provide know-how and help to build skills and competences for more effective policy development, management and evaluation.

A period of major upheaval

From 2010 onwards, the Pompidou Group went through a period of upheaval. Against the backdrop of the financial crisis and political tensions, five member countries decided to withdraw, six other countries joined the Group in parallel: North Macedonia (2011); Serbia (2011); Republic of Moldova (2012); Montenegro (2012); Bosnia and Herzegovina (2015); Monaco (2016). This period was characterised by a significant reduction in the Group's financial and human resources, which led to a major revision of its work programme.

The Pompidou Group's activities have been refocused on the importance of ensuring full respect for human rights in the adoption and implementation of drug policies, in line with the Council of Europe's core mission. The group has also taken the initiative of introducing a gender dimension in its work.

This refocusing and these efforts have helped to restore the Group's relevance and activities, as evidenced by the successive accessions of non-European countries for the first time: Morocco (2011), Israel (2013) and Mexico (2017).

The launch of the Drugs in Prison programme 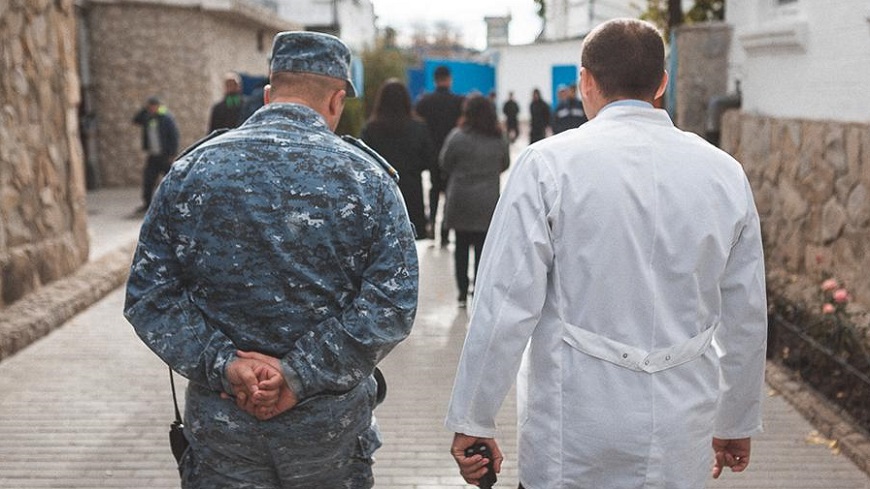 The Criminal Justice and Prison Programme has achieved tangible results in many European countries. In Georgia, the Pompidou Group developed a road map for introducing a law on alternatives to punishment. Together with the Department of Penitentiary Institutions of the Moldovan Ministry of Justice, the programme refurbished prison wards to accommodate therapeutic communities. In Ukraine, it introduced drug treatment and prevention tools in juvenile prisons. Each country has its own special needs and challenges - and together with the partners on-site the Criminal Justice and Prison Programme develops impact-oriented strategies that are already producing improvements.

The Pompidou Group published a paper on Coherence policy makers for psychoactive substances. Following the terms of reference given by the Ministers for the 2011-14 Pompidou Group work programme at the Ministerial Conference in November 2010, the Research Platform was superseded by expert groups related to specific topics. Coherent policies in the area of psychoactive substances was selected as one such topic and the expert group was formed at the end of 2010. During 2012-14 it met four times to produce the fourth publication in the series.

Policy papers on human rights and cooperation with civil society

The Pompidou Group published a set of principles and means aimed at providing decision makers, policy managers and civil society organisations with guidance and tools to develop practical and meaningful ways for government and civil society to co-operate in the field of drug policy.

The Drug policy and Human Rights in Europe paper established a broad framework for understanding the place of human rights in drug policy development, monitoring and evaluation.

Link to background paper and statement.

The Pompidou Group coordinated a research project on drug-treatment systems in prisons in Eastern and South-East Europe that focuses on the situation of drug users among criminal justice populations and the corresponding health-care responses in nine countries in Eastern and South-East Europe. It was conducted between 2013 and 2016, and is a first attempt to collect relevant data on drug use among prison populations and the related responses in the nine countries concerned.

The launch of the statutory revision process 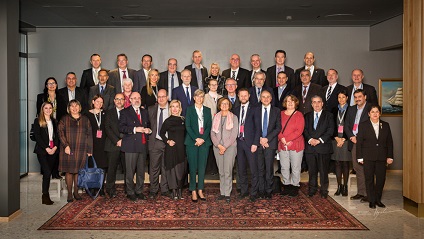 The statutory revision process was launched at the 17th Ministerial Conference in Stavanger on 27-28 November 2018. During the meeting the Pompidou Group’s member states decided to initiate a process to review the group’s terms of reference operation and working methods, in order to more adequately reflect today’s drug policy evolution and the challenges faced at national and international levels. The follow-up of this decision is an integral part of the 2019-2022 Work Programme adopted by the Ministers, who elected Portugal for the four-year presidency.

After 10 years of success in the training field, the International Drug Policy Academy (IDPA) was set up by the Pompidou Group in 2019 in co-operation with the University of Malta and Syracuse University, USA. The Academy now offers the opportunity to obtain a Certificate in Drug Policy Management and also a full-time course leading to a Diploma in Drug Policy.

Accession of Armenia and Georgia

Armenia and Georgia joined the Pompidou Group in 2020.

By the end of that decade, the Pompidou Group brought together 41 member states.

50th Anniversary and adoption of a revised statute

In 2021 the Pompidou Group celebrates 50 years of its foundation with a rich programme.

A major milestone that marks the Group’s 50th anniversary is the adoption of a new statutory resolution by the Council of Europe’s Committee of Ministers on 16 June 2021.

An important substantive realignment of the new statute is the extension of the Group's mandate to include addictive behaviours related to licit substances (such as alcohol or tobacco) and new forms of addictions (such as Internet gambling and gaming), as well as the strong focus on human rights, while reaffirming the need for a multidisciplinary approach to addressing the drug challenge which can only be tackled effectively if policy, practice and science are linked.

To better reflect both its identity as a Council of Europe entity and its broadened mandate, the Group will change its official name to the "Council of Europe International Cooperation Group on Drugs and Addiction".

This decision is the culmination of a statutory revision process that was launched at the Stavanger ministerial conference in November 2018. It involved thorough discussions among the 41 member states of the Pompidou Group, as well as numerous consultations with the Group's main partners, both within and outside the Council of Europe, including major civil society organisations or platforms.

To enable it to take an even more active role in shaping the future of drug policy in Europe, the Pompidou Group initiated a new statutory resolution which was adopted on 16 June 2021 by the Council of Europe's Committee of Ministers.

The main issues addressed through the revised Statute are:

To highlight the main achievements and contributions of some prominent figures in the history of the Pompidou Group, a commemorative event was held at the Pompidou Centre in Paris on 28 October 2021, in tandem with the award ceremony for the European Drug Prevention Prize.

Other events of the 50th Anniversary: 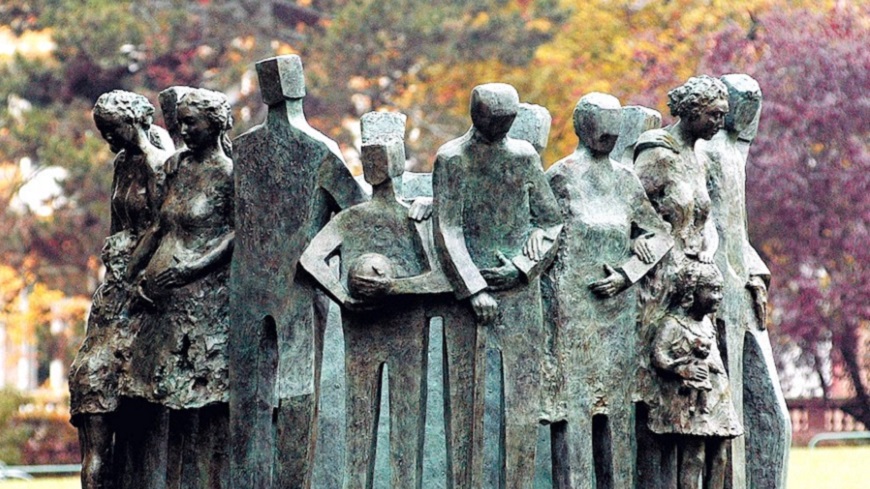 The Council of Europe International Co-operation Group on Drugs and Addictions (Pompidou Group) has a long and rich history dating back to 6 August 1971, when French President Georges Pompidou alerted the Prime Ministers of the other five European Community countries at the time, as well as that of the United Kingdom, to the dangers of the growing use of drugs, particularly among young people. He proposed that a European framework for co-operation be set up to combat the burgeoning trade.

Fifty years later, the Group still proudly bears the name of its founder, and its geographical scope now covers 41 States, extending beyond the borders of Europe. This publication traces the international drug problem over these five decades, the responses to it, and the achievements of the Pompidou Group. It also includes personal contributions from the actors who have made the Group’s history throughout its half-century existence.