The protection of cultural heritage became a State responsibility from very early on in the creation of the modern Greek State. Today, according to the Constitution, “the protection of the natural and cultural environment constitutes a duty of the State and a right of every person” (Constitution of Greece, Government Gazette, 85/A/18-4-2001, Art. 24).

The main legislation governing the protection of cultural heritage is Law 3028/2002, “On the Protection of Antiquities and Cultural Heritage in general” (Government Gazette 153/A/28-6-2002), which develops a comprehensive and detailed system of protection regarding movable and immovable monuments and artefacts and the intangible heritage. State ownership of monuments pre-dating 1453, or the classification of more recent monuments/artefacts considered to be important, are core principles and means of implementing this law.

Protection covers identification, investigation, recording, documentation/study, preservation, conservation and restoration, as well as prevention of illicit exporting and the facilitation of public access and public information regarding the cultural heritage; the law also encompasses enhancement and integration of the heritage in contemporary social life and education and aesthetic enjoyment and public awareness of the cultural heritage. Additional protection is achieved through a monitoring mechanism implemented before planning at each level, or before any activity takes place (e.g. crop farming, livestock farming, mining, building, demolition, excavation, etc.).

Preservation of the cultural heritage is, to a large extent, related to land use and residential growth policies, and in general the monitoring of building activity and construction of infrastructure works in “monument-sensitive” areas. The legislation provides that “the protection of monuments, archaeological sites and historical places shall be included among the goals at every level of land use, developmental, environmental and urban planning.” Furthermore, the law explicitly forbids any action affecting a movable or immovable monument “which could result, directly or indirectly, in the destruction, harm, pollution, or alteration of its form”.

With specific regard to the protection of archaeological sites and monuments, a procedure is applied for their classification (as protected sites) and designation, resulting in the imposition of conditions regarding allowed uses and activities within their boundaries. It is also possible to delimit special protection zones within archaeological sites, namely Zones A (totally protected, non-construction zones) and Zones B (with special constraints on building, land uses, and other activities). 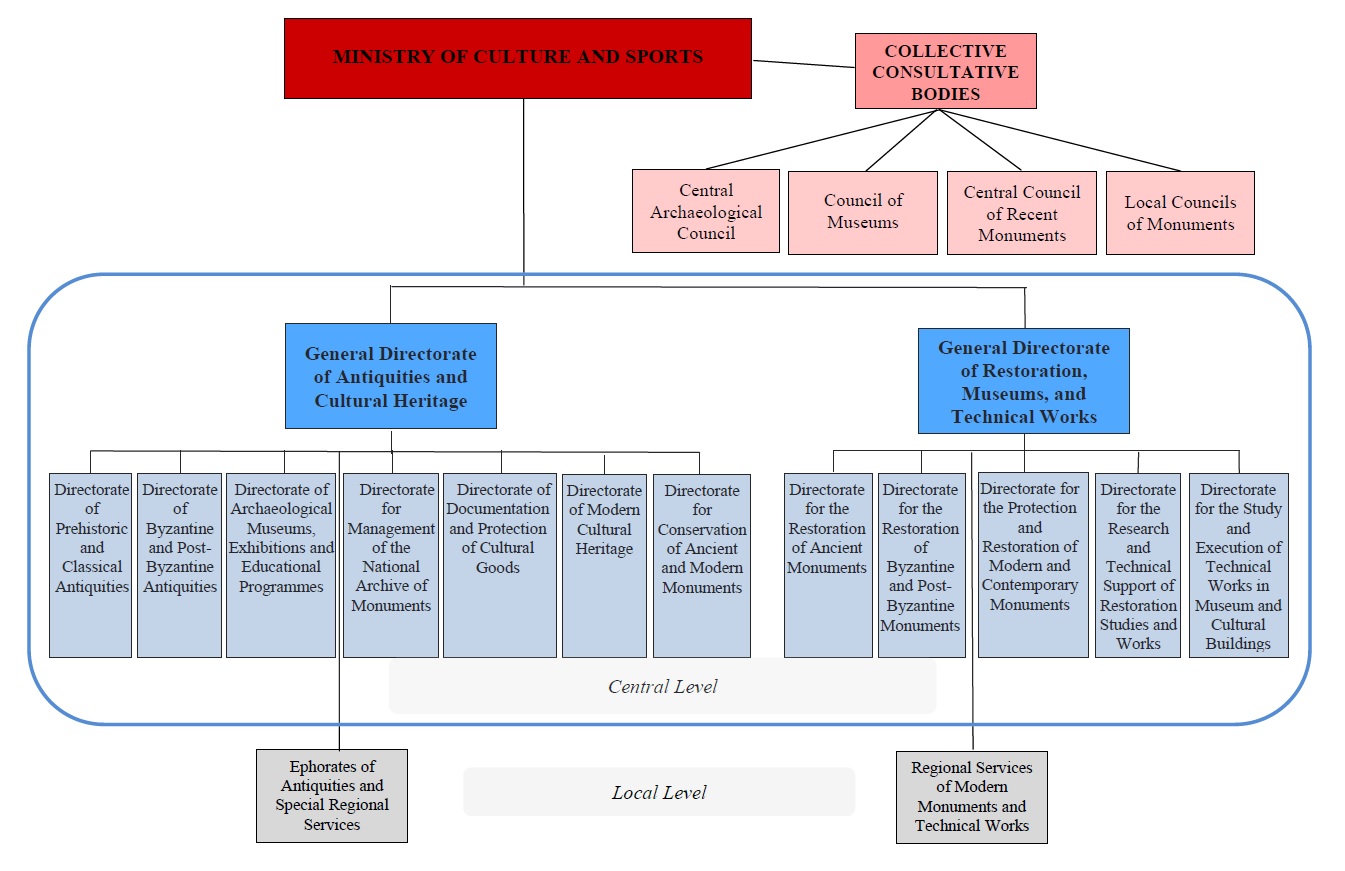 Ministry of Culture and Sports

The main state agency for the protection of cultural heritage is the Ministry of Culture and Sports. The services of the ministry responsible for the management and protection of monuments are divided into:

They supervise and monitors the work of the Regional Services and ensure the coordination of activities and a common approach when dealing with cultural heritage issues.

The Central Services directly related to the protection of cultural heritage are:

It is responsible for the overall protection and management of cultural heritage.

In cooperation with the competent services of the Directorate General of Antiquities and Cultural Heritage, it is responsible for the study and implementation of protection, stabilisation, restoration and enhancement work on architectural monuments and monumental complexes.

The Regional Services include:

A key role in policy-making for cultural heritage protection and in the approval of major interventions at monuments, sites and state museums is played by three collective bodies of the Ministry of Culture and Sports.

Less significant matters are dealt with by the Local Council of Monuments in each Region.

The main legislation governing cultural heritage is Law 3028/02 “On the Protection of Antiquities and Cultural Heritage in general”, which includes a comprehensive and detailed system of protection regarding movable and immovable monuments and artifacts and the intangible heritage.

These come under the jurisdiction of the Ministry of Environment and Energy. However, all private and public works must comply with the Archaeological law (3028/2002).