A monument may be protected under the National Monuments Acts in one or more ways as follows:

The Minister for Culture, Heritage and the Gaeltacht has several functions in relation to the protection of the architectural heritage including making recommendations to local authorities regarding structures to be added to the record of protected structures; issuing guidance; and making submissions on certain developments by, or on behalf of, state authorities.

There are approx. 550 architectural conservation areas and 44,000 protected structures in total in the country, the vast majority of which are in private ownership. There are no grades of protection under the legislation. Each local authority is responsible for development applications in its area and all those affecting archaeological, architectural and natural heritage are referred to the Minister for Culture, Heritage and the Gaeltacht and a number of other prescribed authorities including the Heritage Council, An Taisce – the National Trust for Ireland, the Arts Council and Fáilte Ireland (the national tourism authority). .

Grant aid to owners and occupiers of protected structures for conservation and repair is made available from the Department of Culture, Heritage and the Gaeltacht through the local authorities. The Department also operates the Structures at Risk Fund. The Heritage Council also provides grant aid to historic buildings and structures.

The Taxes Consolidation Act 1997 provides tax relief to the owners and/or occupiers of certain approved buildings and gardens in respect of expenditure incurred on repair, maintenance or restoration. Fiscal incentives are also available under the Living City Initiative for refurbishment or conversion of certain buildings within special regeneration areas within six cities: Dublin, Cork, Waterford, Limerick, Galway and Kilkenny. The Living City Initiative is focussed on the regeneration of retail and commercial districts and encouraging people to live within historic city centres. 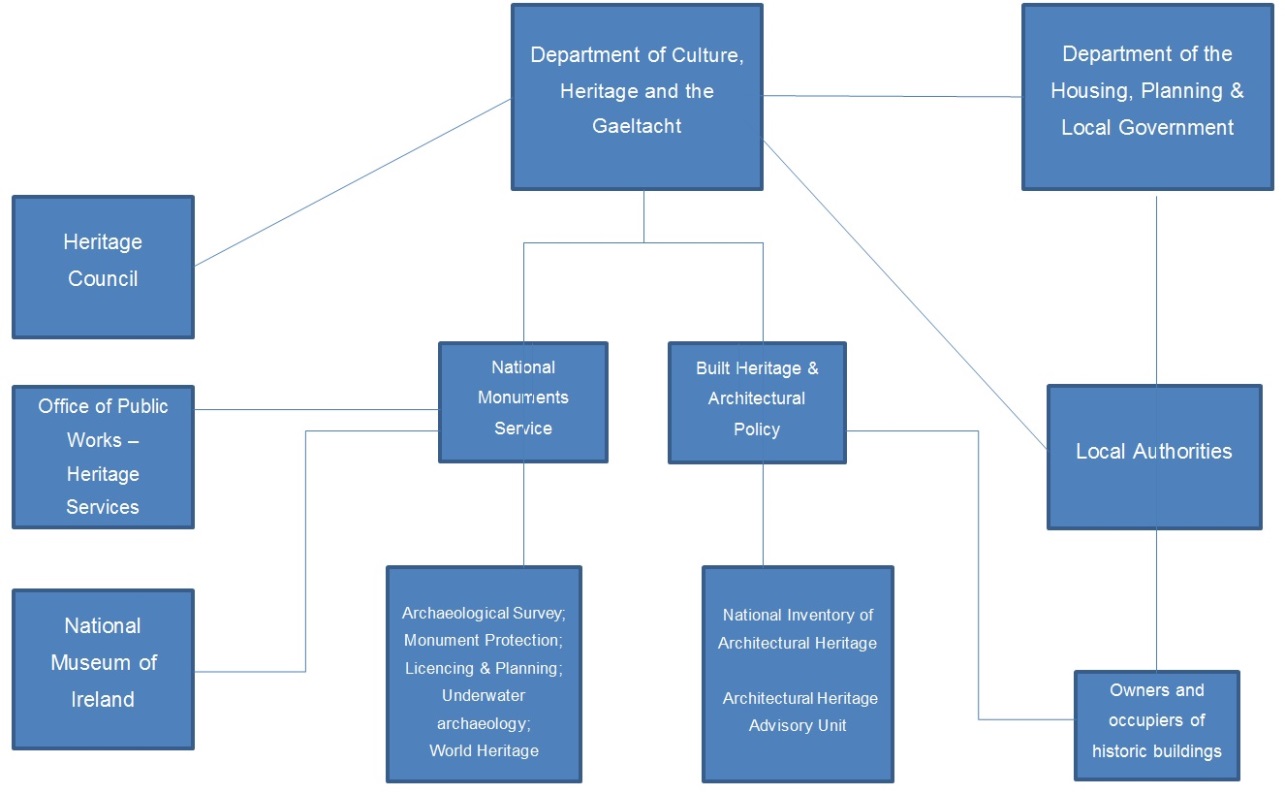 Department of Culture, Heritage and the Gaeltacht

It oversees the identification, protection and presentation of Ireland’s heritage and cultural assets. The objective of the Department is to conserve and manage the unique heritage of Ireland for the benefit of present and future generations, as a support to economic renewal and sustainable employment and in compliance with legal obligations. The Department is responsible for the nomination of sites to UNESCO for the World Heritage List, and for coordinating implementation of the Government Policy on Architecture and the National Landscape Strategy for Ireland.

Within the Department, it is responsible for the formulation and implementation of legislation and policy relating to the protection of Ireland’s archaeological sites and monuments, including historic wrecks that are over 100 years old. NMS has responsibility for the maintenance of the Sites and Monuments Record for the state, and for updating the Record of Monument and Places. There are over 138,800 recorded archaeological sites and monuments, most of which are in private ownership. NMS has responsibility for the regulation of archaeological excavations, the use of detection devices for archaeological purposes, diving on historic wrecks and other underwater archaeological sites, and is the consenting authority in relation to works at national monuments. NMS provides advice to planning and other consent authorities on development proposals which might impact upon archaeology, and operates a series of Codes of Practice with a range of infrastructure providers ..

It is engaged in recording and publishing a representative sample of structures on a county-by-county basis and also publishes a survey of historic gardens and designed landscapes.

It provides technical advice to local authorities, other government departments and agencies, private owners, developers and the general public. It also provides support to the network of architectural conservation officers employed at local authority level.

It was established as a statutory body under the Heritage Act 1995. It advises government on policy relating to archaeological, architectural and natural heritage and supports a network of heritage officers based in local authorities throughout the country.

Il has responsibility for the conservation, maintenance and day-to-day management of some 780 national monuments and historic properties in state ownership and the provision of visitor services at 70 of these sites.

Il is established under the National Cultural Institutions Act 1997. It is the custodian of much of Ireland’s portable cultural heritage. The National Monuments Acts establish the role of the Director of the National Museum of Ireland in asserting the state’s ownership of archaeological objects which are found and which have no known owner. They also provide for the Museum’s role as a regulatory body in Irish archaeology. The Director has a consultative role with the Department of Culture, Heritage and the Gaeltacht in the licensing of archaeological excavations and in relation to Ministerial Consents for work at national monuments and the issuing of directions in relation to archaeological activities on approved road developments. The Museum is also responsible for processing of licences for export and alteration of archaeological objects and is also involved in the drafting and revision of heritage legislation.

Archaeological heritage is protected under the National Monuments Acts 1930-2004. Responsibility for this legalisation lies with the Department of Culture, Heritage and the Gaeltacht.

Architectural heritage is primarily protected under the Planning and Development Act 2000 (as amended), in particular Part IV. The responsibility for this legislation lies with the Department for the Housing, Planning and Local Government.

All acts of the Oireachtas (Houses of Parliament)

Ireland has ratified the following conventions on cultural heritage: