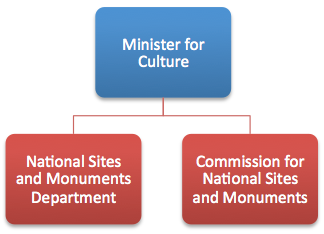 The National Sites and Monuments Department of the Grand Duchy of Luxembourg (SSMN) is concerned with the preservation, restoration and enhancement of the rural and urban built heritage whether religious, feudal, fortified or industrial, with the exception of the archaeological heritage. The SSMN acts as contracting authority for state-owned buildings. As regards heritage belonging to individuals and municipalities, the SSMN can support restoration and enhancement projects and ensure that subsidies are paid by the state for these purposes. This is on condition that the non-state heritage concerned enjoys legal protection at national or local level.

Municipalities under their general development plans are to identify and protect buildings of local importance. In order that substantial, coherent protection may be established for the benefit of the entire built heritage, including what is significant primarily at municipal and local level, the inventory of the built heritage deserving protection was made for the Grand Duchy as a whole. The operation of identifying and documenting the built heritage was effected in conjunction with the municipalities, their design offices and the SSMN.

As to the national protection arrangements (classification as a national monument and listing in the supplementary inventory), the SSMN is one of the prime movers. It manages all protection procedures and thus assumes a role as secretariat of the Minister for Culture.

The SSMN lately completed several specific inventories according to categories of heritage.

Public awareness has been optimised thanks to the creation of the website www.ssmn.public.lu, the annual organisation of the Heritage Days over several weeks, and participation in exhibitions, fairs and publications, particularly on energy efficiency and new energy sources.

The National Sites and Monuments Department is a state cultural institute under the supervision of the Ministry of Culture. It is a centralised administration responsible for the entire national territory. As this is small, there are no regional agencies.

The SSMN is organised according to heritage categories: feudal and fortified, rural and urban, industrial, religious and landscape.

The Department also hosts the secretariat of the Commission for National Sites and Monuments, an advisory body to the Minister for Culture.

The Minister for Culture is the official whose remit includes national heritage protection, carried out either by classifying objects as national monuments or by placing them on the list of the supplementary inventory. As it receives this level of national protection, the heritage concerned can only be altered with the permission of the Minister for Culture. All requests for alteration are analysed by the SSMN which manages the authorisation procedures.

Thus the SSMN backs up the Minister for Culture in the administrative and scientific execution of his political responsibilities.