The Government of Finland approved the national Cultural Environment Strategy 2014–2020 on 20 March 2014. In February 2015 it was supplemented with an implementation plan defining concrete actions, setting schedules and actors as well as monitoring.

The protection and preservation of cultural environment are based on legislation, cooperation between environmental and cultural administration, responsible actions by municipalities and owners as well as citizen activity as it is stated in the Finnish constitution.

The Act (currently under renewal) is under the Ministry of the Environment. The objective of the Act is to ensure that the use of land and building activities create conditions for a favourable living environment and promote ecologically, economically, socially and culturally sustainable development. The Act includes stipulations on national inventories of cultural heritage, which are taken into account in land use planning. The inventory on the Built Cultural Environment of National Importance was approved by the Government in 2009 http://www.rky.fi/read/asp/r_default.aspx (in Finnish). A corresponding national inventory on archaeological heritage is to be finalised by 2021.

The protection of cultural heritage provided by the Land Use and Building Act is based on direct plan stipulations, and on indirect means based on the steerage from mainly the community structure and its functions. The Finnish Heritage Agency other museum- and environmental authorities can influence the contents of the plans at the planning stage through official statements. In conflict situations complaints can be taken to the Administrative Court.

The Land Use and Building Act has increased the independent position of the Municipalities in making planning decisions limiting state interventions to mainly general planning (provincial plans). In addition, the Act has made the requirements more specific, e.g. to take the cultural environment into account in planning. Today, an estimated 25,000 sites have been protected by detailed plans (1% building stock of Finland).

Culturally or historically significant buildings and built up areas may be protected under the Act on the Protection of the Built Heritage (2010). This Act is mainly applied for cultural heritage with specific cultural historic values or interiors, or buildings situated within areas without detailed plan, i.e. in rural areas. A statement from Finnish Heritage Agency is required. Some 300 buildings or groups of buildings are protected under the Act.

All ancient monuments and sites are protected under the Antiquities Act (1963). The Finnish Heritage Agency is responsible for maintaining and caring for the archaeological cultural heritage along with certain provincial museums in Finland.

According to the Church Act and the Act on the Orthodox Church, all Evangelical Lutheran and Orthodox ecclesiastical buildings and their surroundings, fixed structures and artworks constructed before 1917 are protected. Church buildings constructed after 1917 may also be protected based on a separate decision. Currently, 44 younger Lutheran churches, built after 1917 are protected. Since 2014, a statement from the Finnish Heritage Agency is required when parishes plan to modify, dismantle, or alter the use of a church building that has been taken into use at least 50 years ago.

The cultural environment is extensively also referred to in other legislation, such as Nature Conservation Act, Forest Act, Water Act, road legislations and Land Extraction Act. They include statutes aimed at the protection and preservation of beauty and cultural values.

In Lapland, the Sámi Parliament has the same responsibility as the county administrations for cultural heritage defined as Sámi. https://www.samediggi.fi/?lang=en. The Sámi Museum Siida in Inari is the national museum of the Finnish Sámi. http://www.siida.fi/contents?set_language=en

The county of Åland has the status of autonomy according to Autonomy Act (1921). The Cultural Agency (Kulturbyrån) administrates the protection of cultural heritage since 1993 and the archaeological remains after consulting the Finnish Heritage Agency. The Cultural Agency has two units: The Heritage Administration Unit and the Åland Museum. Åland museum:  http://museum.ax/en/. 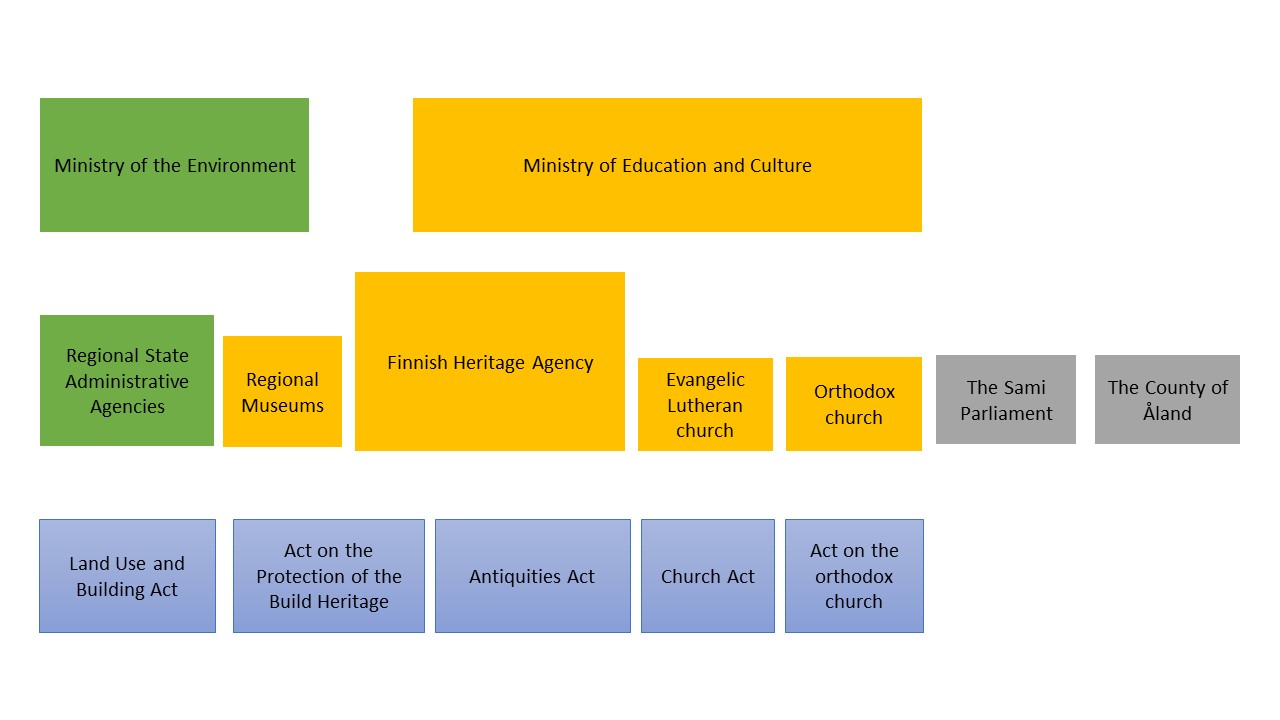 Ministry of Culture and Education

It is responsible for matters relating to museums and cultural heritage in the central government.

Ministry of the Environment

The Ministry prepares legislation, policies and programmes related to Finland’s cultural landscapes and built heritage, and it is also responsible for monitoring the state of cultural environments and supporting the management of heritage sites and landscapes.  The Ministry has a key role in approving decisions on protection made according to the Act on the Protection of the Built Heritage and in approving regional land use plans. The Ministry also supervises regional land use planning.

The Agency is responsible, together with other authorities and the museum field, for protecting environments with cultural history value, archaeological culture heritage and architectural heritage, and other cultural property. It also collects and presents a culture historical national collection, studies material cultural heritage and both supports and develops the museum field nationally. The Finnish Heritage Agency has special responsibility for managing archaeological sites including underwater heritage. The Agency provides varied and constantly developing services for all citizens. It operates under the Ministry of Education and Culture.

The Ministry of the Environment and the Regional Environmental authorities work closely with Finland’s National Board of Antiquities on issues related to cultural landscapes and architectural heritage. The Finnish Heritage Agency also has special responsibility for managing archaeological sites including underwater heritage.

By agreement with the Finnish Heritage Agency, the regional museums are also supervising cultural heritage and environmental protection. There are 22 regional museums operated by the municipalities. The revised Museum Act will come into force in 2020.

At regional level, the regional centres are responsible for supervising land use planning. They are also representing the Government on regional level, which makes the decisions on protection according to the Act on the Protection of the Built Heritage.

The objective is to guarantee the historical and regional diversity of the built cultural environment, nurture the characteristics and special features of the built cultural environment, and promote its culturally sustainable maintenance and use. The built heritage can be conserved through the protection of buildings, structures, groups of buildings or built up areas deemed significant in regard to the architectural history, architecture, special environmental values, the use of the building, or events related to the building.

The Act on Environmental Impact Assessment Procedure (5.5.2017/252, Finlex, in Finnish)

The Act applies to all projects that may be expected to have considerable negative environmental impacts, including harmful impacts on the landscape, townscape or cultural heritage.

Archaeological sites are protected under the Antiquities Act (295/1963, Finlex, in Finnish) which also covers wide areas that contain ancient relics and that have landscape-related value. Furthermore, a number of relics are located in cultural landscapes or are underwater findings.

The Act is currently under renewal.

Overview of the Land Use and Building Act and Decree

Overview of the Legislation on building and landscape protection