Cultural monuments and historic sites represent part of the historic, spiritual and material heritage of the Slovak Republic, a source of identity, education, historical consciousness and patriotism of its citizens. They are a means of tolerance, civic cohesion and understanding between ethnic and religious groups. Historic buildings, cultural landscapes or archaeological sites are not only valuable cultural assets but also an important element of economic development. Conservation of cultural heritage and its appropriate use contributes to improving the quality of life, increases employment, and acts as an important development factor of the regions and municipalities in Slovakia. Protection of cultural heritage is a public interest guaranteed by the Constitution of the Slovak Republic (Art. 44, paragraph 2, of the Constitution of the Slovak Republic).

National policy concerning the architectural, archaeological and landscape heritage is guided by the following strategic documents:

The key priority is the systematic preservation of the authenticity and integrity of national cultural monuments and heritage sites with emphasis on preventing physical deterioration, incorporating heritage protection requirements into spatial planning, promoting civic activities and supporting sustainable regional and local development interconnected with cultural heritage. Another priority line concerns the improvement of access to heritage by means of modern technology and the process of digitisation of cultural content and cultural objects.

The protection and use of heritage in its authentic environment depends on both, the public interest and the responsibility of owners. Owners of national cultural monuments have a legal obligation to ensure maintenance of their heritage property. The Ministry of Culture provides financial subsidies for the preservation of monuments through its programme, Lets Renew Our House, and owners of monuments are also entitled to free consultations with professionals from the Monuments Board and its regional offices. The Slovak Republic has established a multi-resource funding system in culture and provides direct support to heritage protection and promotion activities through the Ministry of Culture’s subsidy programme, “Lets Renew Our House” (up to 95% of eligible costs). 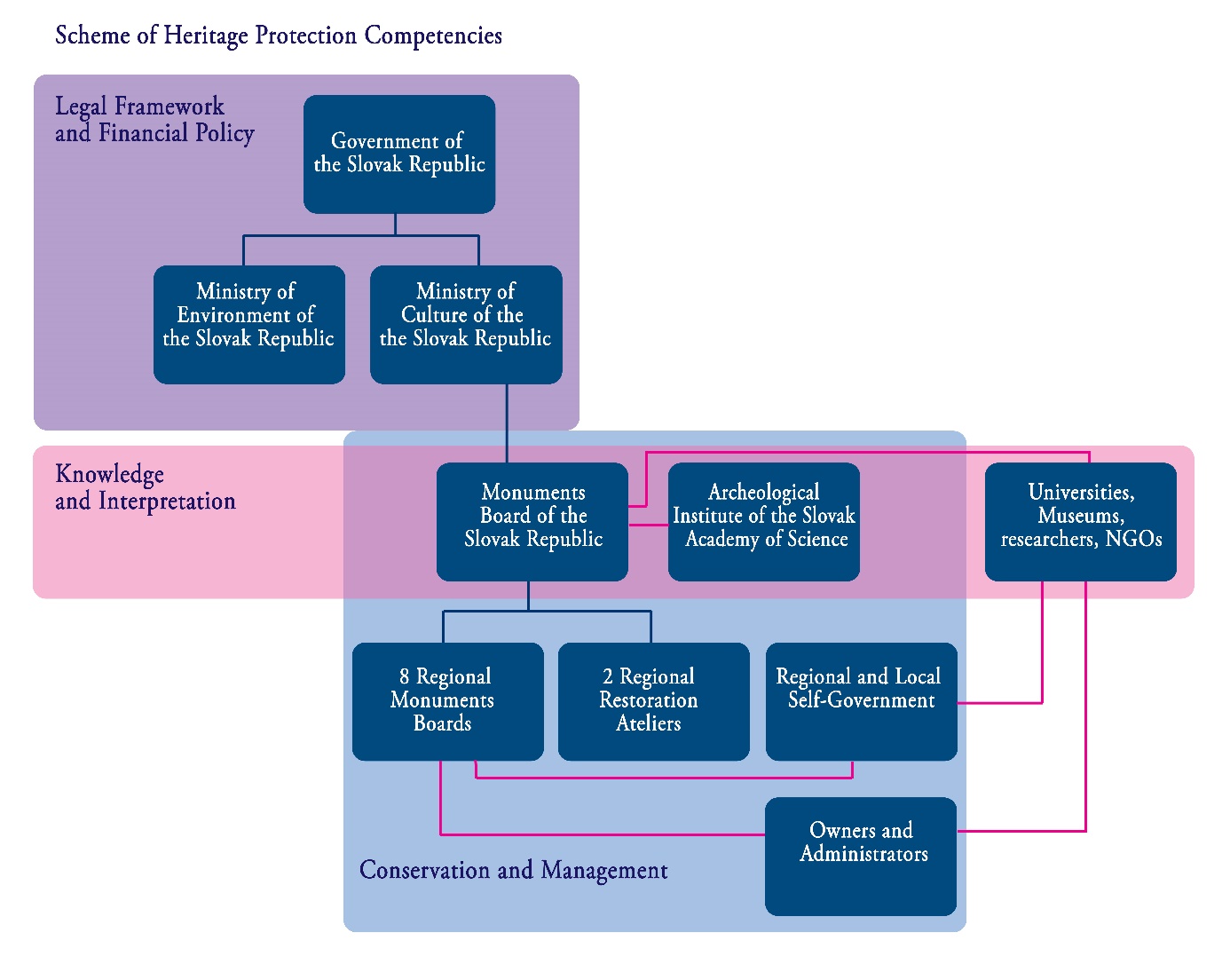 The Act on Protection of Monuments and Monument Sites adopted in 2002 transformed the former Heritage Institute focusing on research and consultancy services into the Monuments Board of the Slovak Republic, which is a specialized public administration body with key powers in the field of heritage protection. This has meant a significant step forward in the establishment of effective heritage protection and, at the same time, the balance between owners’ rights and the public interest in heritage preservation.

Heritage protection methodology is the responsibility of the Monuments Board, which apart from being a public administration body, has also the status of a scientific research institution accredited by the Ministry of Education.

Besides the government authorities, the current legislation assigns obligations also to regional and local self-government bodies which perform certain public administration tasks – they are responsible for issuing building permits. Some municipalities have created positions for heritage marketing and administration, which is a positive asset sustaining adequate use and protection of their heritage resources. However, many smaller municipalities are still struggling to acquire sufficient staff for the cultural heritage field which prevent them from deriving potential benefits of heritage in local development and employment policies (e.g. heritage oriented tourism, traditional crafts, skilled maintenance works, etc.).

Heritage protection is governed by the Act on Protection of Monuments and Monument Sites adopted in 2002.