The aim of the heritage protection system in England is to identify and protect sites of historical, architectural or archaeological significance. Since 2000, the Government, Historic England (formerly English Heritage) and the wider sector have been working continuously to improve the efficiency of the system. The heritage protection system in England designates legally binding categories of protected heritage: Listed Buildings, Scheduled Monuments, Conservation Areas and Protected Wreck Sites.

The Secretary of State for Culture, Media and Sport is responsible for the listing of buildings and the scheduling of ancient monuments. The following are also designated, but without legal implications: Registered Historic Parks and Gardens, and Historic Battlefields.

All categories are listed in the National Heritage List for England, which is maintained and updated by Historic England.

In 2012, the Department for Communities and Local Government published the National Planning Policy Framework (NPPF), which sets out Government planning policies and contains a specific section on the built historic environment. A central aim of the NPPF is the promotion of economic, social and environmental sustainable development within the planning system. In England, management decisions affecting designated heritage are made within the planning system.

As well as state level funding, grant aid is available from public and private organisations for conservation, awareness-raising and educational projects. Funding organisations include (but are not limited to): the Heritage Lottery Fund, The National Trust, the Architectural Heritage Fund and Historic England.

Each country within the UK (England, Northern Ireland, Scotland and Wales) has responsibility for its own historic environment, including historic monuments, built heritage and archaeology. 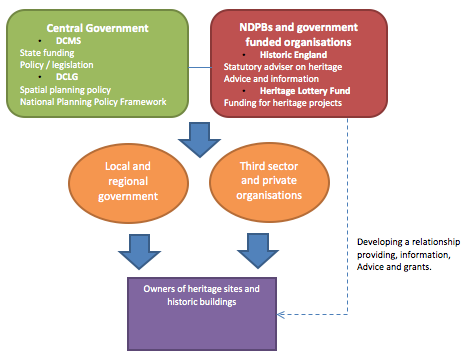 The Department for Culture Media and Sport (DCMS)

It is a Non-departmental Public Body sponsored by DCMS and is the Government’s statutory adviser on the historic environment. Historic England’s responsibilities are set out in the National Heritage Act (1983, amended 2002). Historic England is responsible for recommending sites to be designated to DCMS and maintaining the National Heritage List for England on behalf of DCMS. The organisation works with key Government departments to provide advice on heritage matters and how these will be affected by policy and legislation. Historic England also produces advice notes for the public and heritage sector on wider heritage matters.

In April 2015 a new charity was formed, retaining the name English Heritage Trust which manages the National Heritage Collection of over 400 properties and historic sites owned by the state.

It is also a Non-departmental public body which distributes National Lottery proceeds allocated to heritage for the UK as a whole. The organisation is the largest dedicated funder of heritage in the UK.