The basic aspects of the financing of culture heritage projects can be divided into three subgroups: budgetary financing, financing from the European pre-accession funds and financing through the private sector, corporate philanthropy and corporate social responsibility. Budgetary financing of culture is still dominant in Serbia and it is one of the most prominent state and legal instruments of influencing the position of culture in general. The Law on Culture specifies that the Ministry of Culture and Information must use open competitions for allocation of funds for programmes and project of culture. Public calls relating to specific areas are open every year to the public and to private institutions, which can put forward their projects. 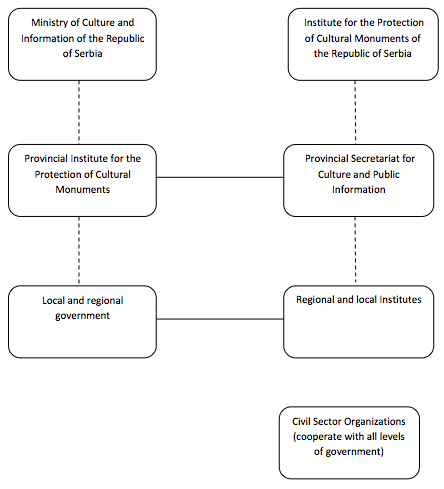 The protection of immovable cultural heritage in the Republic of Serbia is managed at three different levels: state, provincial and local level. At state level, the Ministry of Culture is in charge of public administration duties regarding the development and improvement of culture. The Sector for Cultural Heritage Protection, within the ministry, is responsible for analyzing and monitoring the situation in the field of cultural goods protection and it proposes strategies and measures aimed at its improvement.

Apart from the Ministry of culture, 14 different provincial institutes for protection of cultural monuments (IPCMs) exist in the territory of Serbia: one at national level, two at provincial level, two at city level and nine at regional level. In addition to the IPCM network, the Government of Serbia established the Central Institute for Conservation with the idea of centralizing conservation of both movable and immovable cultural heritage. In accordance with the Law on Cultural Heritage (1994), currently in force in Serbia, the ICPMs are responsible for research on immovable cultural goods; drafting studies and projects for undertaking works in addition to providing insights into the implementation of measures for protection and utilization of immovable cultural goods; participating in the procedure of preparing spatial plans; and publishing studies on the work undertaken on immovable cultural goods.

As a national institution, the Institute for Protection of Cultural Monuments of Serbia (IPCMS) is responsible for a competent assessment of the condition of immovable cultural goods of great and exceptional significance and it undertakes measures regarding their protection and utilization.

Legal instruments in the field of cultural heritage protection